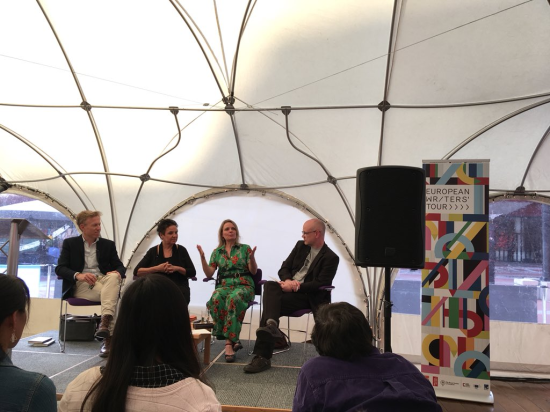 European Literature Night at the British Library: identity and translation by Marja Kingma

The arrival of the month of May can only mean one thing: European Literature Night!

EUNIC  and the European Writers’ Tour, with additional support from the Czech Centre and Flanders House, organised this year’s event on May 10th. As always the British Library hosted the event whereby authors from continental Europe showcased their work translated into English. They  read passages from their books in English and their own language. The readings were followed by a panel discussion with a Q&A session. Afterwards the audience was invited to buy the guest authors’ books and have them signed.

So far, so traditional. However, this year saw some radical changes. There were three authors instead of six or eight, which did the authors more justice. It made the panel discussion possible, which wasn’t there in previous years. A smaller group of authors also made the event more intimate, and this was emphasised by the new location: not the big auditorium in the Knowledge Centre, but a cosy tent in front of it, on the Piazza.

We had a new host: Scott Pack, who replaced the host for many years Rosie Goldsmith. She was still there, but rather enjoying the event, with a nice glass of wine. The theme of the evening was ‘Identity’. The choice of authors obviously reflected this. All three authors share a ‘multifaceted’ identity. Poet/philosopher Sylva Fischerova was born in what used to be Czechoslovakia and is now the Czech Republic. Nothing fundamental changed, life went on. People tell each other the story of the old woman who was born in the Austrian-Hungarian Empire, grew up in Germany, lived in the Soviet Union and died in Ukraine, never moving away from her home town. Borders don’t determine one’s identity.

Maybe language plays a more important part in ‘identity’ than geographical borders.
Sylva objected to having her poetry translated into English. When her good friend Stuart Friebert offered to translate her poetry she dismissed it out of hand as being ‘impossible’, but eventually he persuaded her to give it a go. He then not only translated her poetry, but also commented on the poems themselves, sometimes resulting in changes to them. Sylva now thinks the translation is even better than the original Czech version. I can’t judge, because I don’t speak Czech, but I enjoyed Sylva’s readings from The Swing in the Middle of Chaos.

Next up was Peter Terrin. He read from his 2015 novel Monte Carlo. The story throws up many questions about ‘identity’, such as where the protagonist belongs: in his English village, where he earns a living, repairing cars or on the Formula 1 circuits, as one of the top mechanics?

Peter Terrin sees himself as a ‘European’, rather than as a Belgian, or Fleming. ‘Identity’ is big in Belgium and language plays a major part in this, Terrin doesn’t ‘do’ borders. He speaks Flemish, English, probably French too and writes in Dutch (Flemish is very seldom used in writing). He lives in Belgium and publishes in the Netherlands.

‘This is really good,’ Peter thought, reading David Doherty’s translation of Monte Carlo. It felt almost like a new work. In a certain sense translations are new works. Translators never merely translate word by word; there is a big creative effort involved in translating any text. Still, the question remains what made him think like that. Maybe a foreign language creates the distance required to see one’s own work in a different light.

German novelist and publisher Meike Ziervogel certainly seems to think so. She moved from Germany to the UK thirty years ago and writes solely in English. She calls herself a ‘translingual’ writer. She noticed that when writing in German she was hiding her emotions behind complicated words and constructions. At the time her ‘beginner’s’ level of English forced her to write in simpler, more direct language, which did bring out her true emotions. After thirty years English has become a native language to her and I could not help wondering if she ever feels like writing in German, doing the reverse of what she did thirty years ago, to force herself to identify her true emotions.

Ziervogel is now on her fourth novel, The Photographer, about her own grandfather living through the Second World War.

I look forward to reading the various books that were discussed this evening, including Ziervogel’s Magda, her debut, about the wife of Joseph Goebbels. I hope I’ll finish them all before next year’s European Literature Night!

This blog was originally published on British Library European Studies page on 21 May 2018.