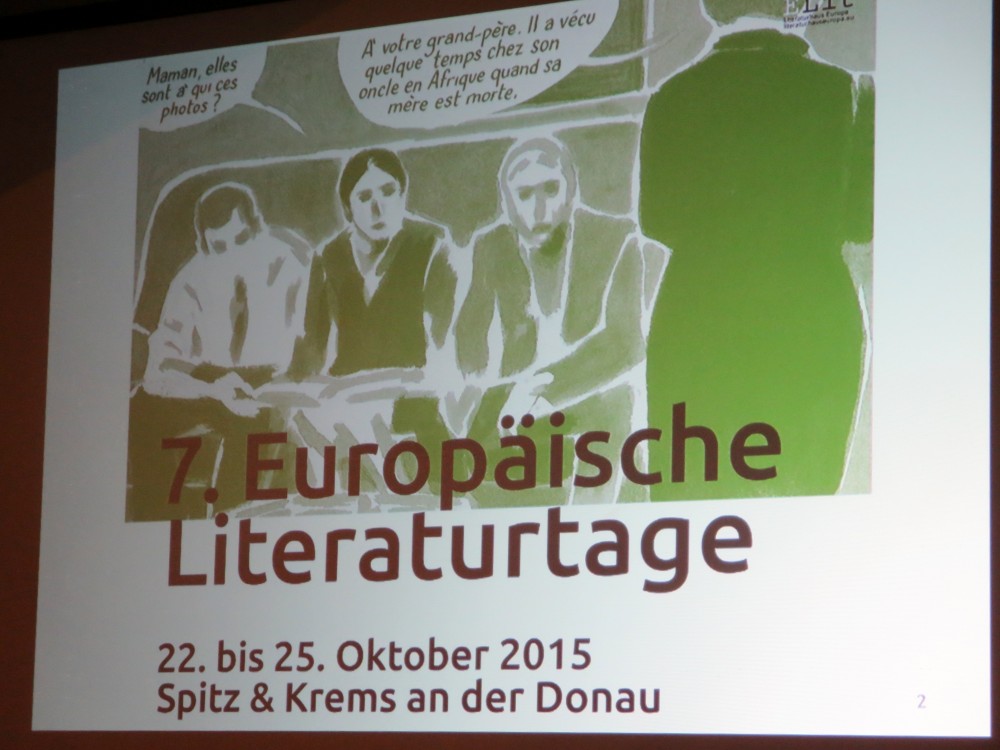 This month ELNet is treating you to a whole ‘package’ of European literary experiences from our annual ‘ELit European Literature Days’ in Spitz on the Danube in Austria. Thank you to our ELit partners and to everyone who contributed to a fascinating few days debating the hottest trends, books, translations and ideas in Europe. Rosie Goldsmith had the great honour of being one of the main moderators during those few days, and was particularly proud to introduce ELit’s keynote speaker, the Scottish writer A.L. Kennedy.

So here, exclusively for you, is our ELit gift package, a selection of events, debates, blogs and photos from our annual ELit European literature gathering in Austria, consisting also of Rosie’s notes on literary trends in Europe and a transcript and audio podcast of the brilliant lecture by author A.L. Kennedy.

Do check out the website of our Austrian ELit partners.
Do read ‘Art is Stronger than Propaganda’ by journalist and author Anthony Gardner in The Economist’s ‘Intelligent Life’ magazine. Anthony attended ELit Literature Days.

As did writer and critic Lucy Popescu. Read her ‘European Literature Days’ in Huffington Post. 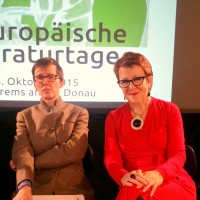 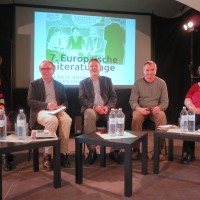 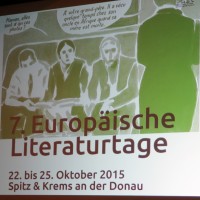 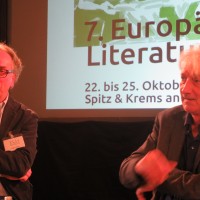 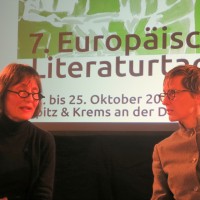 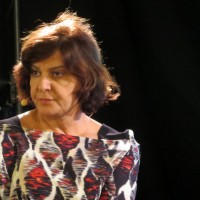 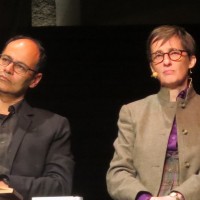 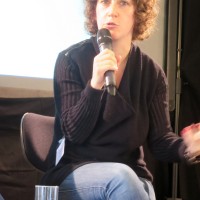 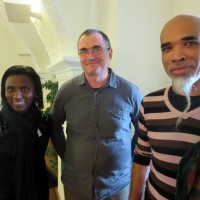 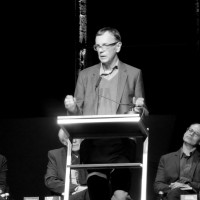 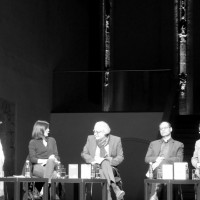 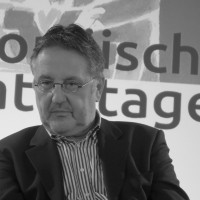 You can find the full Flickr photo album here.

ROSIE GOLDSMITH (moderator) INTRODUCTION
2015 has been a busy year for A.L. Kennedy.

I imagine EVERY Year is busy for her but this year is a particular milestone – she has just turned 50: Happy 5oth birthday!

ALK has packed more into her 50 years than most of us could manage in a century.

I’m sure she wouldn’t dream of sitting down to calculate her output but Wikipedia (!) has done it for her: she has published 17 books – 6 novels, 1 science fiction novel, 7 short story collections and 3 books of non-fiction.

Already this year – and it is only October – she has published The Drosten’s Curse a novel about Dr. Who – the daring equivalent of rewriting the Bible in the UK – and appeared, performed, read or talked about literature, politics, Scotland, Europe and most topics, abroad and all over the UK.

Did you know she is also a stand-up comedian? What a great gift: to make people laugh!

Her new novel Serious Sweet has been put to bed for publication next year.

She is a popular broadcaster – she has this year written a series of BBC radio essays, a radio drama and articles for newspapers and magazines. She is an excellent journalist. Currently I’m just catching up with her short story collection All The Rage from 2014. She writes faster than I can read her work.

ALK is also a frequent judge of literary prizes – an incredibly time-consuming and difficult job if you’ve done it yourselves. She’s been a judge of the Man Booker Prize and The Guardian First Book Prize. This year she’s chaired the judges of The Warwick Prize for Writing (her old university) and of the wonderful Forward Prize for Poetry – which was won overall by Jamaica-born Claudia Rankine.

And as you may know, The Man Booker prize was won by Jamaica-born Marlon James so – ‘The times they are-a-changing’ even on our small island. We have been transformed by migrant literature.

I’m not going to list all ALK’s book titles, awards, articles, plays, public events – do some of the work yourselves! – but what is significant here is that she is widely translated – into German and into several other languages. She is respected in German-speaking countries – I don’t need to tell you that: you understand her, you get what she is about. She is an intellectual, outspoken, daring; she is a European writer, a literary writer – some of which in the UK may possibly be considered negative attributes but for us here are very positive.

She has won many awards – The prestigious Costa Book Award and twice she was selected as one of the Granta Best Young British Novelists.

In 2007 she won the Austrian State Prize for European Literature.

ELit’s Artistic Director and Programmer Walter Grond, and all of us on his team, decided on the theme for this year’s European Literature Days 9 months ago – we had no idea then that the topic of immigration would become so dominant in our politics, societies and cultures.

‘The Migrants’ is the perfect topic for this symposium and for this lecture from A.L. Kennedy. I’d like to invite ALK to present her lecture on this topic.

Afterwards I will ask the Swiss writer, poet, linguist, translator, European migrant by birth, lifestyle and profession, Ilma Rakusa to respond and then we’ll discuss the ideas that arise from their talks.

2. please click here for the audio podcast with introduction.

3. please click here for the Lecture as reprinted in German in the ‘Suddeutsche Zeitung’ & ‘Die Presse’

ROSIE GOLDSMITH: RESPONSE TO ALK LECTURE
A.L. Kennedy has issued a call to action – even if you don’t agree with all she says, the lecture is moving and tough to take. Ideological, critical, political, self-critical and critical, finger-pointing, rallying.

These are the ALK comments which struck me:

(QUOTES are based on ALK Lecture; they are not the views of RG)

Originally she was going to start her lecture differently but then the issues of the day changed her approach: like all of us she saw the little boy on the beach, a child in European dress, dead. Children should be allowed to play on the beach; they are not an existential threat.

And our government supplies arms to Syria, she says (QUOTES).

ALK sees echoes of World War 2 in the UK and asks what Russia is playing at? Putin supporting Bashar al Assad is dangerous. Where will this lead? she asks.

QUOTE: The media is increasingly strident and toxic; hatred and loathing are part of the mainstream discourse; we live with censorship and curtailed freedoms.

We need to counteract ‘cascading cruelties”.

Scotland as an example of how things may be done? Is she right?

QUOTE: Artists must be the guardians of culture and the imagination – how can we save lives? We must restate our roles as artists, redefine mass culture.

This dark time can teach us about the light. About love. Love and humanity – that’s what life boils down to. We must try harder. We must do better.

WRITER ILMA RAKUSA RESPONDS TO A.L. KENNEDY’s LECTURE
Ilma Rakusa is introduced by Rosie Goldsmith
(with thanks to Tess Lewis for translation and bio):
Ilma Rakusa is one of Switzerland’s most prominent poets; an essayist on Central European and Russian literature and a noted translator. She was born in Slovakia to a Slovene father and Hungarian mother and spent her early childhood in Budapest, Ljubljana, and Trieste. She moved to Zürich with her parents in 1951, when she was five years old. She has lived her life as a nomad, accustomed to being a foreigner and never quite fitting in. She studied Slavic and Romance Languages and Literatures in Zürich, Paris, and Leningrad, writing her doctoral dissertation on ‘The Theme of Loneliness in Russian Literature’.

Today she is a writer, journalist, and translator from Russian, Serbo-Croatian, Hungarian, and French and a lecturer at the University of Zürich. She speaks 8 languages.

Along with her memoir, Mehr Meer, Rakusa has published twenty collections of poetry, short stories, essays, and edited volumes of works by Danilo Kis, Joseph Brodsky, Marina Tsvetaeva, Anna Akhmatova, and Marguerite Duras, among others. She has translated almost two-dozen books by authors as varied as Duras, Tsvetaeva, Chekov, Remisov, Brodsky, Kis, Nádas, and Leslie Kaplan.

‘An autobiographical declaration of love … Mehr Meer is a book of restlessness, brimming with colors, sounds, and images that mark out a life in transit.’ (NZZ)

ILMA RAKUSA RESPONSE TO A.L. KENNEDY’s LECTURE:
”All poets are migrants; all poets are Jews” (1920s)

She sees a conflict between ‘Homme poeticus and politicus’.

Agrees with ALK – “we must take a stand as writers’ Ilma believes that, now is not the time for me to write fiction but to speak out in public, to be more journalistic and engaged. We have a responsibility, values; the situation is so extreme today that I believe we must go even further than ALK suggests.

“A dead child in the sand. These are individuals, people. We must show LOVE.”

“There is fear in Europe, an aggressive nationalism, right wing politics is on the march across Europe. Europe is being tested. Europe as a shared project is failing.”

DISCUSSION ON LITERARY TRENDS IN EUROPE

Day One – Struggling with Parallel Worlds by Laszlo Szabolcs

With Iman Humaydan in Melk by Peter Zimmermann

The awkward subject of commitment by Peter Zimmermann

Day Three – The Digital “East” and “West” by Laszlo Szabolcs