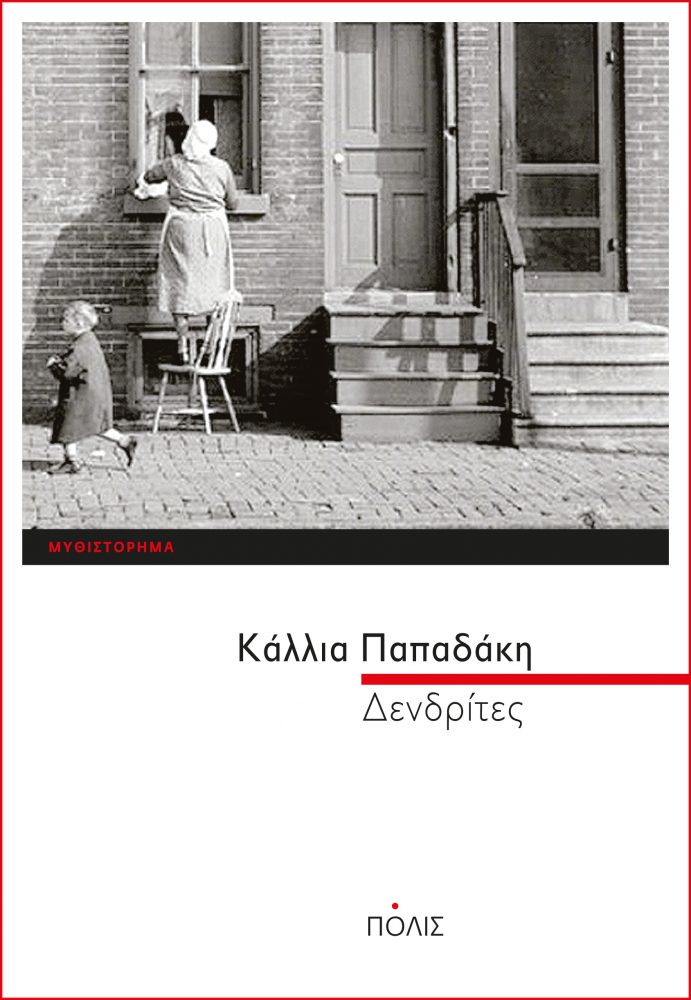 EUPL 2017: From DENDRITES by Kallia Papadaki, translated by Irene Noel-Baker

The sun sets indolently behind the town of Camden, while Leto trips and bends down to tie her shoelaces at the side of the road, and opposite her the municipal school bus crosses the avenue south west, a motto along its side with “equal opportunities in education,” proclaiming the right of every pupil regardless of race, colour or wealth to enjoy the same privileges of a state education. She sees Minnie’s face glued to the window, her darkish, curly braids cropped short, gazing far, far away, to the Delaware River, and further still towards Philadelphia, where her father lives, who abandoned them when she was a baby, and whom she’s never known, and if there is one image she has kept in her memory it is the worn out boots she found in the attic, size 14, which she made into flower pots, putting in earth and fertiliser and planting bean sprouts, for her botany class.

Minnie lives in a run down neighbourhood, with grey stone houses that have faded, time has worn them down evenly, and in their uniform ugliness there is harmony, the neglected stone does not seem out of place, it’s as if time has wisely sculpted it, the ruins bear the past almost with reverence, witness to a human ambition thwarted with the passage of time, the people and ruins co-exist, having accepted by now the decay, and only in the evenings when night arrives early, now, as winter sets in, is one afraid, when the wretchedness of the buildings is hidden beneath the rimy blackness, and their shapes recover something of their early, piercing glory and the people – to exorcize the benevolence of a night that falls like balsam on the battered stone and covers it – turn into monsters, lest they dream of deserving something better, and reject their unlucky fate. Minnie gets off the bus and puts her school bag on her back, waves a quick goodbye to her Mexican friend, Miguel the octopus, the driver, and shrugs down into her thin jacket, looking straight ahead, and runs alongside the gulf of Newton adjacent to Morgan Village and joining the Delaware River to the west, where it dominates the town and floods it in eternal, gloomy damp and seasonal bloodsucking mosquitoes, that thrive on the stagnant waters and human shipwrecks of the Cooper tributary.

“You’re early,” her mother informs her from inside the kitchen and Minnie, out of breath, leaves her school bag in the hall of the ground floor flat and goes straight to the living room, picks up the remote and turns on the television, “nothing,” they still haven’t given a date for when they’re showing the next episode of Dallas, she needs to find out finally who shot JR, it’s been six months since last March and the question is still left hanging, it’s almost November now and they haven’t solved the mystery, the entire summer was taken over with who did it and why, it turned September and Minnie took heart, the television season was due to begin, everything would be sorted out, but she was unlucky, the actors were on strike, indefinitely, and after September October came and went, and after October November, and somewhere along the line people got tired of waiting, and to keep their viewers interested and eager the producers of CBS threw oil on the flames and put trailers onto TV screens lasting a few seconds each with possible versions of who was almost a murderer, the debates flared up again, and how wicked was that? Half the cast were potential murderers, and all summer Minnie laid a bet that JR was shot by his mother Miss Ellie, he’d treated her badly enough, the poor thing, because there is no pain greater than what your relatives bring, and the closer the ties, the more brutally they scar you, and Pete, her older brother, it was the 3rd of September, picked up his air rifle and caught her in the left shoulder, and Minnie let out a shriek, roused the entire neighbourhood, and he was laughing and saying sorry, he didn’t mean it, he did it by mistake, mistakes happen, it’s human, and Minnie’s lovely eyes had turned to pinpricks from the pain, and her welling tears had dimmed them, and then she knew for certain that she had shot JR.

“21st of November they said they’d show it,” Minnie turns her head and sees her mother chewing something that looks like fried banana and they call it plantain in San Juan, she herself can’t stand the taste and feel of it ever since they shoved it into her mouth for the first time, and however much the omniscient and tireless Louisa tries to persuade her it’s low in sugars and has a high concentration of potassium, and that she would do better to stop being so stubborn and difficult and adapt to what’s good for her, since knowledge arrives too late to prevent the things her daughter will regret, and Minnie with her back turned and the television blaring, about to ask what they’re having for dinner because she’s as hungry as a wolf, feels the electricity in the room, and as light travels faster than sound, so the words come directly after it, like a thunderclap, “What have you gone and done to your hair, dammit?” and as if that wasn’t enough, Louisa’s fingers, greasy from cooking, yank at what’s left of her braids to undo them, as if pulling them will bring back what’s gone.

It’s almost 11 at night and Pete hasn’t turned up, her mother wanders in and out of the living room and Minnie, wrapped in her old woollen baby blanket at the end of the sofa, pretends to be caught up in intractable mathematical problems. “What time is it?” asks Louisa for the 100th time, and doesn’t wait for or get a reply, “when did you last see him?” and Minnie without looking up from her book mutters, “Mum, I told you, he was at school today,” and Louisa goes out of the living room, opens the front door and weaves about on the few squares of pavement, as if she is deciding whether to cross the road, as if on its far side a threatening river flows wildly, and her worried figure is faintly delineated, staggering, through the lace curtains, and her shadow grows giant-like on the walls and hovers above the sofa, above Minnie’s head, like a bad omen. It’s now after 12, Louisa sits at the kitchen table with her head in her hands, Minnie catnaps on the sofa, and between them the telephone sits silent, nobody knows anything, his two best friends came home early, the police have nothing enlightening to say, if anything turns up they’ll call, not to worry, and the phone sits in its place, dumb and unearthly like the thoughts conjured up in Louisa’s mind and rebounding in Minnie’s dreams.

It’s nearly daybreak and Pete hasn’t appeared yet, Louisa is still in the same position, her body a dropped weight with its counterweight gone, Minnie wrapped in the woollen blanket sleeps uneasily on the sofa, and the sun hesitantly comes in through the window and lights up all the dusty corners, yesterday’s webs left by busy spiders, the breadcrumbs on the floor, the decay and neglect provoked by a night of deep sorrow, and Louisa gets up listlessly from the chair, turns on the gas ring and mechanically prepares fried eggs with thin slices of bacon and pieces of toast spread with sugar and margarine.

Minnie stands behind her, just woken up, with her hair dishevelled from sleep and her empty stomach rumbling with hunger, she tugs at the edge of the faded dressing gown but gets no answer, “Mummy, what time is it?” she asks softly not to startle her with unnecessary demands, and Louisa looks like a ghost, her excess weight no longer hugging her body as before, you could swear that overnight her clothes have started to hang off her, and her curved shoulders have slumped forward and given up, “what time is it?” insists Minnie, and Louisa as if hypnotised opens the cupboards, brings out tableware dulled by years of use, “Time for breakfast, time for breakfast,” she says to herself and lays the table for three, out of habit.

They eat together while the neighbouring houses are still obscured by morning mist and the roads around are stubbornly silent, in half an hour everything will change, Louisa knows that by morning nothing will be the same and she rests all her hope on this interval, when her thoughts like shadows contract and expand in time, to cover as large an area of hope as is her due, before she is found out by the bad news she instinctively knows, because her son is mixed up in gangs and drugs, they told her so at the Baptist church to make her see sense, and to bring her to the way of the Lord, and she for two weeks has been wavering as to what and who benefits by her not going to church, and rejecting and resisting the strictures of her local community, but it’s because there is no faith and hope left inside her for second and third chances to fall like manna from heaven and nourish and feed people who’ve been deprived for years.

Minnie packs her bag and runs to catch the school bus, Louisa pulls out the kitchen stool and sits at the window with the curtains open, Minnie runs beside the bus which speeds away, Louisa hears her own breath, a wave of inopportune whys, ifs and maybes, they trap her in her body and hammer her down, Minnie loses site of the bus which gathers speed down the avenue, and becomes a tiny trembling dot at the edge of the deep red horizon, and Louisa takes deep breaths, clutches at her breast and crumples to the floor, because her heart no longer wants to live inside this body, and her clenched, raised fist is the evidence of her ultimate and futile battle.

Born in 1978 in the border town of Didymoteicho, Kallia Papadaki grew up in Thessaloniki and studied economics at Bard College and Brandeis University in the United States, and film at the Stavrakos Film School in Athens. Papadaki works as a professional screenwriter. September, her first feature script, won the International Balkan Fund Script Development Award in 2010, received a Nipkow scholarship in Berlin, and premiered at the 48th Karlovy Vary International Film Festival (official competition). Rivers is her second feature film script, currently in development.