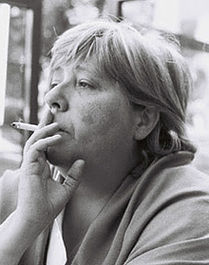 Ana Luísa Amaral‘s first volume of poetry, Minha Senhora de Quê was published in 1990, earning her work a place in the emergent genealogy of Portuguese women’s poetry. She has published ten more original collections of poetry and two volumes of collected poems, as well as several translations (including poetry by Emily Dickinson, John Updike and William Shakespeare) and books for children. Amaral’s poetry has been translated into several languages, and her work has already appeared in France, Spain, Brazil, Italy, Sweden, Holland, Venezuela, Colombia, and is soon to be published in the United Kingdom, Mexico and Germany. She is the recipient of several prizes and awards, and is represented in a large number of Portuguese and international anthologies. Amaral has also given lectures and seminars on poetry and poetics and given poetry readings the world over.

Margaret Jull Costa has been a literary translator for nearly 30 years and has translated works by novelists such as Eça de Queiroz, José Saramago, Javier Marías and Teolinda Gersão, as well as poets such as Sophia de Mello Breyner Andresen and Ana Luísa Amaral. She has won various prizes, most recently the 2015 Marsh Award for Children’s Fiction in Translation for Bernardo Atxaga’s The Adventures of Shola. In 2013 she was invited to become a Fellow of the Royal Society of Literature and in 2014 was awarded an OBE for services to literature. In 2015 she was awarded an Honorary Doctorate by the University of Leeds.