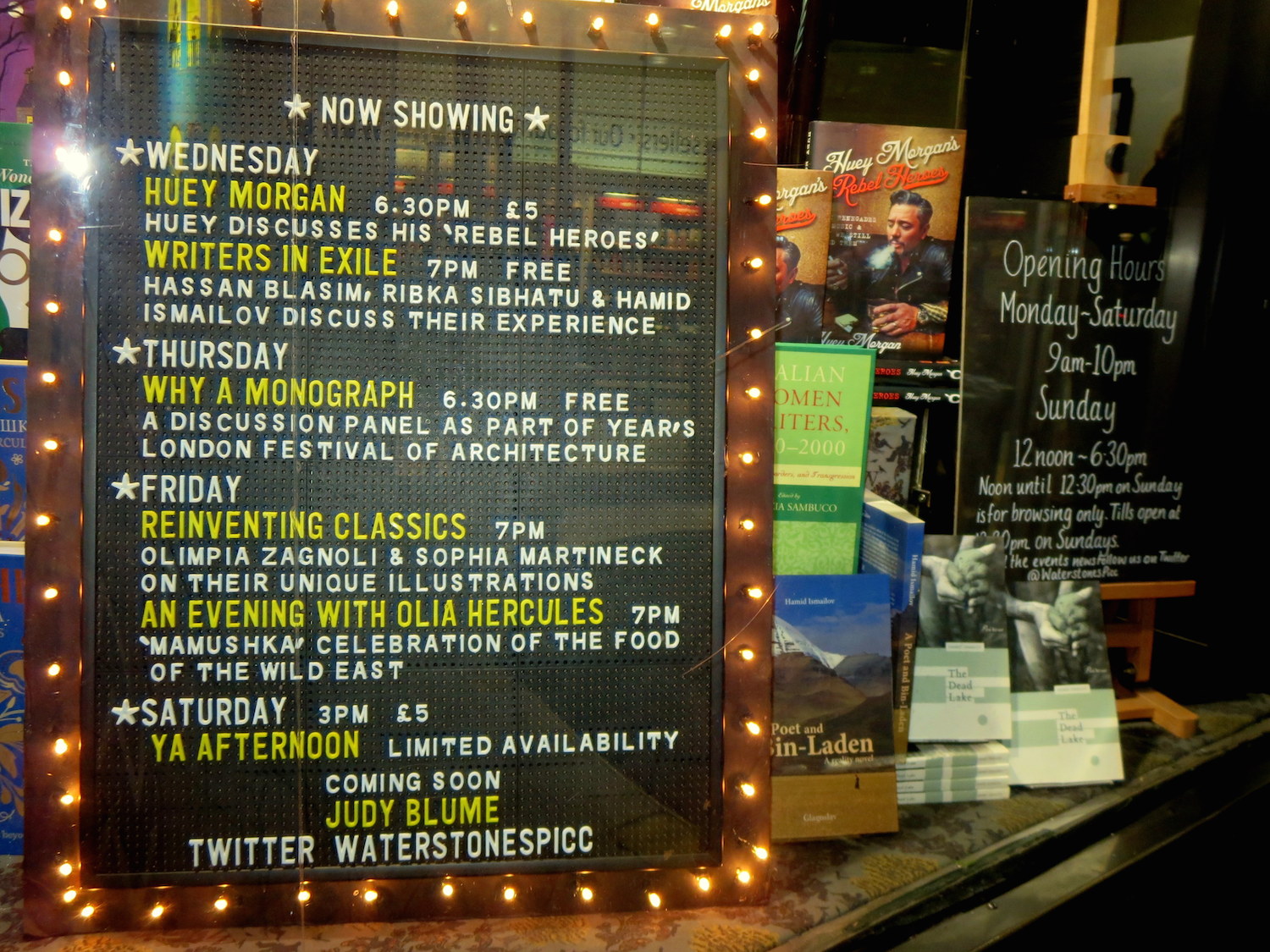 ELN VII: When Home Is Far Away by Rosie Goldsmith

Organised by EUNIC London, the Czech Centre, Speaking Volumes Live Literature Productions; with the support of Arts Council England, The European Commission, Waterstones, Comma Press and the Finnish Institute in London. With special thanks to Peirene Press and English PEN.

7 years ago we launched ‘European Literature Night’ at the British Library. First it was just a ‘Night’, now it is officially also a ‘day’ – in fact several days and nights.

We are slowly broadening our narrow British minds and our activities – and tonight we embrace 3 outstanding writers from beyond Europe, now exiled in Europe.

The fact that all 3 have survived either/or/all the horrors of war, brutal dictatorships, imprisonment, torture, racism and the traumas of migration and exile gives their writing a substance and significance that is transcendent, important for us all and profoundly human. Their work is both beautiful, brave and painful. I am not being sentimental here– they certainly aren’t – these are the facts.

Living away from home, being away from family away from the touchstones of belonging and childhood memories is something you and I may have the freedom to choose. They did not and still do not. They are in exile. How does it feel to know you can’t return home? How do you live and write if home is far away? Does exile change their creativity? Can it breathe new life into their new lives in their new homes?

The fact our 3 writers have found safe havens with us in Europe is a gift we should treasure – and thanks to their translators, enlightened publishers and some very special colleagues, we can tonight enjoy the gift of their writing and their presence.

So please welcome:
HASSAN BLASIM from Iraq – and Finland. Hassan is a poet, filmmaker and short story writer. The Guardian described him as ‘perhaps the greatest writer of Arabic fiction alive’. Hassan is here with his translator Jonathan Wright. In 2014 they won the Independent Foreign Fiction Prize for ‘The Iraqi Christ’ published by Short Story specialists Comma Press.

RIBKA SIBHATU is from Eritrea originally – and Italy today. Ribka is a poet, a remarkable writer born in Eritrea in 1962 and today living in Rome. She is also an expert on immigration politics as well as the Eritrean folk tradition. Cristina Viti, the Italian poet and translator, is with us tonight with an exclusive for tonight – a new translation of a new poem by Ribka Sibhatu (which we will publish on our www.EurolitNetwork.com website soon)

HAMID ISMAILOV is a prolific journalist, poet and novelist writing in Uzbekh and Russian and was forced to leave Uzbekistan 20 years ago. He now lives here in London, works at my alma mater the BBC as Head of the Central Asian Service. His translator is Andrew Bromfield – not with us tonight but thank you to him! Hamid’s publisher, the brilliant Peirene Press, is here tonight!
————————————————————————————————–

If you would like to read more by Rosie Goldsmith about each writer, and a fuller version of their biographies and publications, do read on!

“Think Irvine Welsh in post-war and post-Saddam Baghdad, with the shades of Kafka and Burroughs also stalking these sad streets.”
(Boyd Tonkin, The Independent)

Hassan Blasim is a poet, filmmaker and short story writer from Iraq. The Guardian described him as ‘perhaps the greatest writer of Arabic fiction alive’.
He was born in Baghdad in 1973. He studied film in Baghdad, writing and directing two successful films – Gardenia and White Clay.
He was forced to leave Baghdad in 1998, aged 25, for Sulaymaniya in the Kurdish area in northern Iraq, where he continued to make films, including the feature-length drama Wounded Camera. He worked under a pseudonym fearing for his family in Baghdad under the dictatorship of Saddam Hussein. But a new name was not enough – and he was forced to leave Iraq. Eventually, after several dangerous and difficult years often on foot, crossing borders, he arrived in Finland as a refugee. He continues to make films and documentaries in Finland and has won international fame for his writing. He writes in Arabic. Hassan’s short story collection The Madman of Freedom Square (published by Comma Press, translated by Jonathan Wright) was long-listed for the Independent Foreign Fiction Prize in 2010. A heavily edited version was published in Arabic in 2012, but immediately banned in Jordan. Hassan has also twice won the English PEN Writers in Translation award. The Iraqi Christ, his second collection of short stories (translated into English by Jonathan Wright, published by Comma Press) became the first ever Arabic novel to win the Independent Foreign Fiction Prize in 2014. A selection of his stories was published as The Corpse Exhibition by Penguin US in 2014. He has also written essays on cinema and continues to make films.

Ribka is a poet; another remarkable writer who lives in several worlds and several languages. She was born in Eritrea in 1962 and today lives in exile in Rome. She was imprisoned for a year in 1979 and then fled Eritrea in 1980, moving first to Ethiopia, then to France and then Italy in 1996, where she’s lived for nearly 20 years.
She writes in Tigrinya and Italian. In 1993 she published a bilingual book of poems and stories based on her life Aulò: Songs and Poems from Eritrea.
In 1999 RIbka wrote a major work in Italian, Il Cittadino che non c’è. L’immigrazione nei media Italiani, a critical sociological work analysing the Italian media’s coverage of immigrant communities and Italy’s relations with immigrants, issued in 2004 as The Missing Citizen. Her collection of Eritrean folk stories and fables, The Exact Number of Stars, was published by (Italian publisher) Sinnos in 2012. Ribka Sibhatu speaks five languages and currently works across Italy as a social mediator and activist, focusing on improving inter-cultural relations in Italian schools and society and drawing attention to the situation in Eritrea and of Eritrean exiles. She is an expert on immigration politics as well as the Eritrean folk tradition.

Born in 1954 in Kyrgyzstan, Hamid Ismailov moved as a young man to Uzbekistan.
He is a journalist, translator, poet and novelist writing in Uzbekh and Russian.
In 1992 he was then forced to leave his home in Tashkent, Uzbekistan, when his writing caught the eye of government officials. Under threat of arrest, he fled to the UK because of his ‘unacceptable democratic tendencies’. Here in London he got a job with the BBC World Service, where he is now Head of the Central Asian Service. In 2010, the BBC appointed him it’s first-ever (and so far last!) ‘Writer in Residence’ for BBC World Service. He wrote a series of wonderful blogs in this 4 year period – some of which we will publish here on our website. In 2012, Hamid Ismailov represented Uzbekistan at the Poetry Parnassus in London – as did Ribkha Sibhatu!

Hamid’s works are banned in Uzbekistan. His poetry, prose and journalism have been published in several languages. He is the author of many novels, including Le Vagabond Flamboyant, Two Lost to Life and The Railway, which he wrote originally before he left Uzbekistan, translated in 2006 into English by Robert Chandler, and considered today a great classic of Russian – and Uzbeki! – literature.
Other great Ismailov titles are: Hostage to Celestial Turks, Googling for Soul, The Underground, A Poet and Bin-Laden, and The Dead Lake – a poetic masterpiece about the environmental legacy of the Cold War, published to great acclaim by Peirene Press in the UK in 2014, translated by Andrew Bromfield and long-listed for the Independent Foreign Fiction Prize 2015. Hamid Ismailov’s poetry collections include Sad (Garden) and Pustynya (Desert). He’s also written books of visual poetry and translated Russian and Western classics into Uzbek, and Uzbek and Persian classics into Russian and several Western languages.