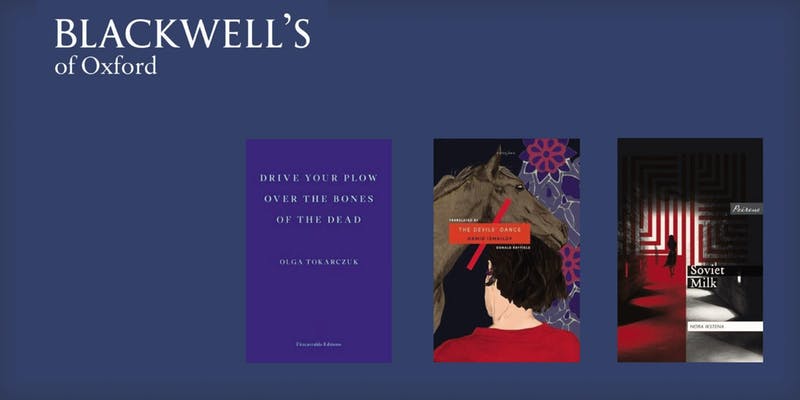 Blackwell’s are pleased to announce that we will be holding an event with the finalists for the EBRD Literature Prize 2019 with both writers and translators in attendance. The evening will be hosted by the Chair of the Judging Panel, Rosie Goldsmith.

The EBRD Literature Prize was launched by the European Bank for Reconstruction and Development last year to promote translated literary fiction from its regions of operations. It is one of the few international literature prizes which recognises both author and translator in equal measure. The €20,000 Prize provides a unique opportunity to reflect the culture, creativity and storytelling of countries from eastern Europe to the Baltic States, Central Asia, the Western Balkans and the southern and eastern Mediterranean.

The three finalists are:

This novel considers the effects of Soviet rule on a single individual. The central character in the story tries to follow her calling as a doctor. But then the state steps in. She is deprived first of her professional future, then of her identity and finally of her relationship with her daughter. Banished to a village in the Latvian countryside, her sense of isolation increases. Will she and her daughter be able to return to Riga when political change begins to stir? At first glance this novel depicts a troubled mother-daughter relationship set in the the Soviet-ruled Baltics between 1969 and 1989. Yet just beneath the surface lies something far more positive: the story of three generations of women, and the importance of a grandmother giving her granddaughter what her daughter is unable to provide – love, and the desire for life.

The Devils’ Dance – by an author banned in Uzbekistan for twenty-seven years – brings to life the extraordinary culture of 19th century Turkestan, a world of lavish poetry recitals, brutal polo matches, and a cosmopolitan and culturally diverse Islam rarely described in western literature. Hamid Ismailov’s virtuosic prose recreates this multilingual milieu in a digressive, intricately structured novel, dense with allusion, studded with quotes and sayings, and threaded through with modern and classical poetry. With this poignant, loving resurrection of both a culture and a literary canon brutally suppressed by a dictatorship which continues today, Ismailov demonstrates yet again his masterful marriage of contemporary international fiction and the Central Asian literary traditions, and his deserved position in the pantheon of both.

Drive your Plow Over the Bones of the Dead by Olga Tokarczuk, transl. by Antonia Lloyd-Jones (Fitzcarraldo Editions) Language: Polish

From the winner of the Man Booker International Prize for Flights, the novel takes place in a remote village in south-west Poland where Janina, an eccentric woman in her 60s, describes the events surrounding the disappearance of her two dogs. When members of a local hunting club are subsequently found murdered, she becomes involved in the investigation. By no means a conventional crime story, this novel offers some thought-provoking ideas on our perceptions of madness, social injustice against people who are marginalised, animal rights, the hypocrisy of traditional religion, and belief in predestination.

On Thursday 7th March the winner of the EBRD Literature Prize will be announced at an award ceremony at the EBRD’s Headquarters at One Exchange Square, London.

Rosie Goldsmith is an award-winning journalist specialising in arts and foreign affairs. In twenty years at the BBC, she travelled the world and presented several flagship programmes. Rosie is a linguist and has lived in Europe, Africa and the USA. Today she combines journalism with chairing and curating literary events and festivals for leading cultural organisations. Known as a champion of international literature, translation and language learning, she promotes them whenever she can. She is Founder and Director of the European Literature Network.

Tickets for this event cost £5. Doors will open at 6.45pm, at which time there will be a small bar available for the audience to purchase drinks. For more information, please contact our Customer Service Desk on 01865 333 623 or email events.oxford@blackwell.co.uk.