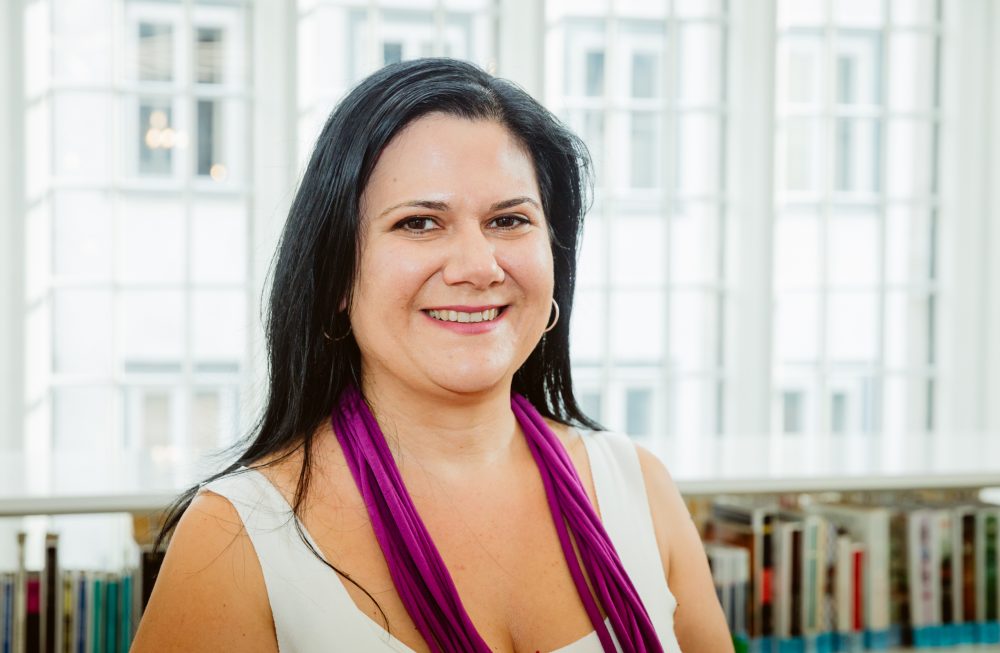 The winner of the 2019 Commonwealth Short Story Prize is Constantia Soteriou. The writer from Cyprus was last night awarded the world’s most global literary prize at a ceremony at the Maison de la littérature in Quebec City, Canada.

In ‘Death Customs’ Soteriou writes about mothers and wives in Cyprus who were led to believe that their loved ones were missing after the 1974 war, when the state had evidence of their deaths. The story, submitted in Greek, was translated for the prize by Nicosia-based translator and cultural critic Lina Protopapa. It is the first time a translation takes the overall prize.

Constantia said she is ‘honoured and happy to win this amazing prize. It feels like a reward for all the hard work I have been doing over the last eight years, writing about the perspectives of women on the political and historical events of Cyprus.’

This year’s chair of the judges, the novelist, essayist and playwright Caryl Phillips, said: ‘“Death Customs” is a remarkable short story that manages to be both personal – following, as it does, the painful narrative of a woman who has lost her son – and deeply political, in that it charts the division of a land as it topples into civil war. It is poetically intense and complex in form and subject matter, yet the story remains admirably lucid and moving.’

Soteriou was born in Nicosia in 1975. Her first novel, Aishe Goes on Vacation (Patakis, 2015), received the Athens Prize for Literature award. Her second book, Voices Made of Soil (Patakis, 2017), was included on the shortlist for the Cyprus Literature Awards.

‘I grew up seeing the faces of the mothers and the wives of the missing people,’ she said. ‘Those were the real victims of the war. Women should not be victims of any war. Women are the continuation of life. I wrote this story to salute their strength.’

The initial inspiration for the story came to her when she attended a funeral of a missing person she attended, a distant relative of her own family, whose remains had been found. ‘His mother was there, an elderly woman in her late eighties, who had been waiting to bury her son for forty years. She has been wearing black all that time, left in this grey zone without any information about what had happened to her boy. We are talking about a lifetime. I was shocked, because the boy was only nineteen years old at the time he went missing. I could not imagine the experience of waiting for so long.’

When she went home that day, she kept thinking about this woman’s story. ‘I did not start writing with politics in mind,’ she said. ‘But I write about what is painful, and what is personal, and that is as political as it gets.’

At the Maison de la littérature, Soteriou was joined by the four other regional winners of the prize: Mbozi Haimbe, who was born and raised in Lusaka, Zambia, and now lives in Norfolk, UK; the Malaysian freelance writer, language and creative writing teacher Saras Manickam; Alexia Tolas, born and raised in The Bahamas; and the writer, artist and editor Harley Hern, who lives on a rural block where she chainsaws firewood and fixes fences.

At the ceremony, Commonwealth Writers, who run the prize, also announced that short stories in the French language will be accepted for next year’s prize. The prize is already open to entries in Bengali, Chinese, English, Greek, Kiswahili, Malay, Portuguese, Samoan, Tamil and Turkish. Such linguistic diversity – unique in the international prize landscape – represents the richness of the many and varied literary traditions of the Commonwealth.

‘This is the first time we have ever had a translated story win,’ Vijay Krishnarayan, Director-General of the Commonwealth Foundation, said. ‘The fact this happened in the first year we opened the prize to translations from Greek suggests a vast wealth of writing around the Commonwealth that has yet to reach Anglophone audiences.’

Soteriou said she was ‘very sorry that there are not more books being translated from Greek into English, or any other language. Greek literature needs to find its way abroad. As for Cyprus, I am a part of a new generation of Cypriot writers that follow international literary developments, read contemporary novels, experiment stylistically and write in the Cypriot dialect. I am proud to be part of this generation of writers.’

‘Death Customs’ and all regional winners’ stories will be published on adda, the innovative online magazine of Commonwealth Writers. They have also all been published online by the literary magazine Granta.

Submissions for the 2020 Commonwealth Short Story Prize will open on September 1, 2019.