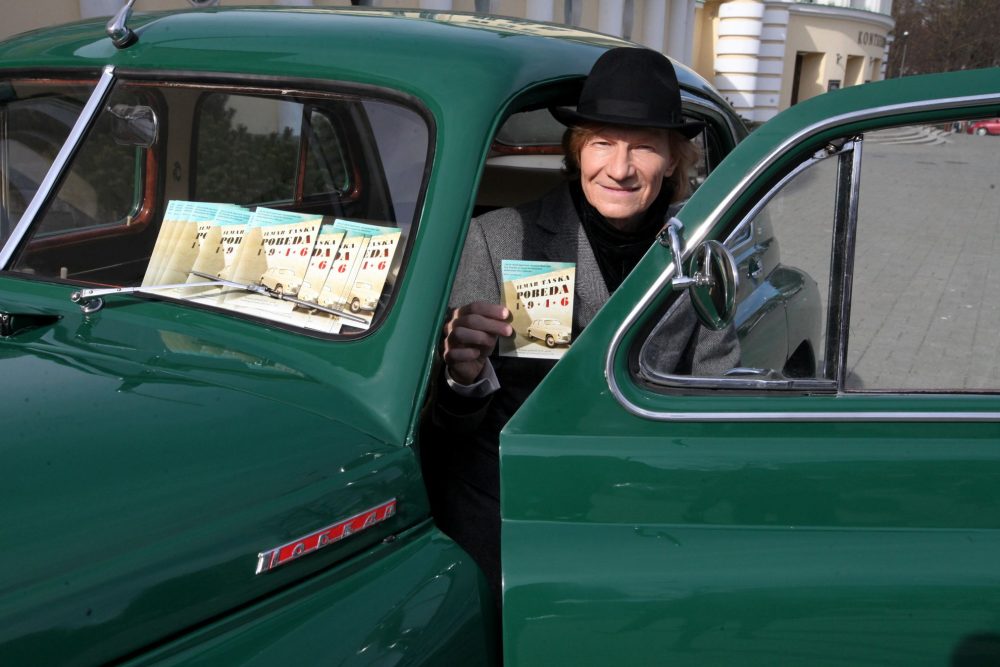 I’ve been told that my novel is highly topical and a little before its time, in regards to travel ban and Brexit. In the work, one British protagonist ponders about the new borders and departures. And the year was only 1946.

The Dream Car (aka “Pobeda 1946” [Varrak, 2016]) has won critical acclaim and was last year long time No 1 in Top 10 of Estonian fiction. It is to be published in Finland by the leading publisher WSOY (Bonnier Books) in spring 2017. At present, Cornelius Hasselblatt is translating it into German and Consuelo Rubio into Spanish.

The action begins in spring 1946. Former allies, the U.S.S.R. and Great Britain, are rivals again;  the Iron Curtain is forming. A small independent country – Estonia – is now a western Baltic province of the USSR with a large influx of immigrants.

A travel ban enforced by the Soviet Union has affected communications between Alan, a BBC news anchor, and Johanna, an opera singer. They cannot exchange letters anymore because the letters are diverted to a desk of the secret police. Instead they communicate surreptitiously via Alan’s radio broadcasts. In this tense atmosphere, they begin to plan for a secret meeting in Moscow.

Johanna’s nephew, a six-year-old curious boy, lives with his family, his mother and father, who, in order to escape the new political order, is hidden in a back room behind a closed curtain. A glimmering new car, called a “Victory” (Pobeda), comes into the six year old’s life. Its driver: a charming and mysterious man. Playing with the car’s steering wheel as he pretends to be driving the car, the boy unintentionally reveals the family’s secret. Friendship between the boy and the mysterious man affects all members of the family and catapults the boy from his innocent childhood games to the dangerous games of grown-ups. The boy understands that he has to keep everybody’s secrets but he doesn’t know how to orient himself in a world where one person’s hero is another’s traitor. The first draft of the novel is available in English, translated by Christopher Moseley. This is an excerpt:

The boy climbed onto a woodpile and sat down on a thick log that that rocked under his weight. Finally he was back in the driver’s seat. He switched on the engine, put it into gear and felt the bus start to move under him. He rocked himself on the wooden seat as he drove along the road full of pot holes, and the engine got louder when he changed gears. As he drove and battled with the bumps in the road, he noticed two lights approaching from the end of the street. A splendid shiny beige car was slowly approaching. It was brand new.

“Psssh” – the boy was pressing the button to open the bus doors. “Last stop! All passengers please get off.”

The approaching Pobeda had stopped on the other side of the road. The boy climbed down from the woodpile and stepped closer to the Pobeda, his heart pounding. He had seen beautiful cars before, but none so brilliant and new. Sitting in it was a tallish man in a grey coat,. He was looking at the boy and smiling broadly. He didn’t get out of the car or turn off the engine. The boy approached the car self-consciously. He made a circuit around the car, bent down behind it and sniffed the exhaust-pipe gases. Even that smelled wonderful. The man lowered the car window and leaned his head out toward the boy: “Do you want to become a car mechanic?”

“So cars don’t interest you much?”

The boy moved alongside the passenger side of the car, rose on tiptoe and looked in the window. Coloured lights shone on the dashboard and the seats were covered in leather.

“Do you want to get in?” the man asked the boy with a friendly glance. The boy knew that he mustn’t talk to strangers, but sitting in a car like this was worth breaking the rules for. He could simply sit in it without talking. The man opened the door, stretched out his hand and pulled the boy up onto the seat. He looked slyly at the boy and flashed the dashboard lights to please him. The man laughed. His hair was nicely styled and he was clean-shaven, not like Daddy. It was hard to sit silently when such an amusing man was wanting to chat. And they did chat about cars for a bit.

Then the man inquired: “What’s your name? Where do you live?” The boy didn’t answer those questions. Mummy had forbidden him to answer such questions. He didn’t understand why, but Mummy and Daddy didn’t let him talk to strangers. He stretched out his arms and tried the steering-wheel. It was cold, smooth and curved. This would be much nicer to hold onto than the stick with which he drives his bus. The man seemed to read his thoughts, he shifted aside and said: “Come, sit closer and hold onto the wheel like proper bus-drivers do.” The boy placed both hands on the wheel and looked straight ahead through the windshield. The man pressed some button and the wipers suddenly sprang into action. The boy squealed in surprise and they both laughed. The man took the boy’s hand, and with it pressed the button again and the wipers stopped.

“Now you try. Does your father have a car too, or does he go by bus?” asked the man.

“My Daddy doesn’t go out at all,” the boy blurted out. Startled, he looked at the man. But the man only smiled. He stared deep into the boy’s eyes and replied kindly, “Not all chaps are car enthusiasts like we are.” This man can be trusted, thought the boy.

“My Daddy is only interested in tanks and armoured cars.” But now his mother’s perpetual warning rang in his ears again: “Never talk about Daddy to anyone.”

“Has your Daddy driven a tank?” asked the man. “What has he told you about them?”

The boy pressed his lips together firmly. He wouldn’t say anything more about it.

“Do you want to go for a drive?” asked the man.

The man was silent for a moment. “All right then, bus-driver. Maybe we’ll meet again.”

He gave the boy an encouraging look.

“You could sit at the wheel yourself tomorrow evening. I’ll teach you how to drive. Since your Mummy and Daddy don’t especially care for cars, let it be our little secret!” He looked deeply into the boy’s eyes and asked: “Can you keep a secret?” The boy nodded solemnly.

The man reached out his big hand, took the boy’s hand and squeezed it firmly.

“There are things to be kept between drivers,” he said. “Let’s meet here again tomorrow, if you’re able to come.”

He leaned over the boy and pushed the car door open, so he could leap down from the seat.

The boy was sorry to leave the warm car. He could still feel the upholstered leather seat under his bottom and the pleasant aroma of the car in his nose. It was some unfamiliar smell that was a mixture of petrol, cologne, leather seats and the scent of the dashboard. He plodded slowly toward his home, stopped at the door and glanced backward. He saw the Pobeda slowly and almost noiselessly slipping away behind him.

Ilmar Taska grew up in Estonia and then studied at the Moscow Film Institute. He has worked as a film producer, director and screenwriter internationally. In 1993 he established his own television company which was the first private national network in Estonia. In 2011, Ilmar made his debut into the literary world with an autobiographical novella called Better than Life (“Parem kui elu”). In 2014 he won the annual literature prize in Estonia for his short story “Pobeda” and his short story collection More Beautiful than Life (“Skonare an livet”) was published in Sweden. In 2016 his novel The Dream Car (aka Pobeda 1946), based on the short story “Pobeda”, was published in Estonia to critical acclaim. It will be published in Finland in 2017 by WSOY and a Lithuanian edition is forthcoming . His short story, “Apartment for Rent”, was included in Best European Fiction 2016, published by Dalkey Archive Press. Ilmar works as a consultant for House of Film and divides his time between Tallinn and Los Angeles. For more information, please visit http://ilmartaska.edicypages.com/

Christopher Moseley is a freelance translator into English from Estonian, Finnish, Latvian, and the Scandinavian languages. He has translated The Man Who Spoke Snakish (Grove/Atlantic) and worked for BBC Monitoring, a branch of the World Service. In addition to teaching, Christopher is Treasurer of the Foundation for Endangered Languages.

A short film A Car Called Victory by young filmmakers is in post production already and there is interest in the movie rights.