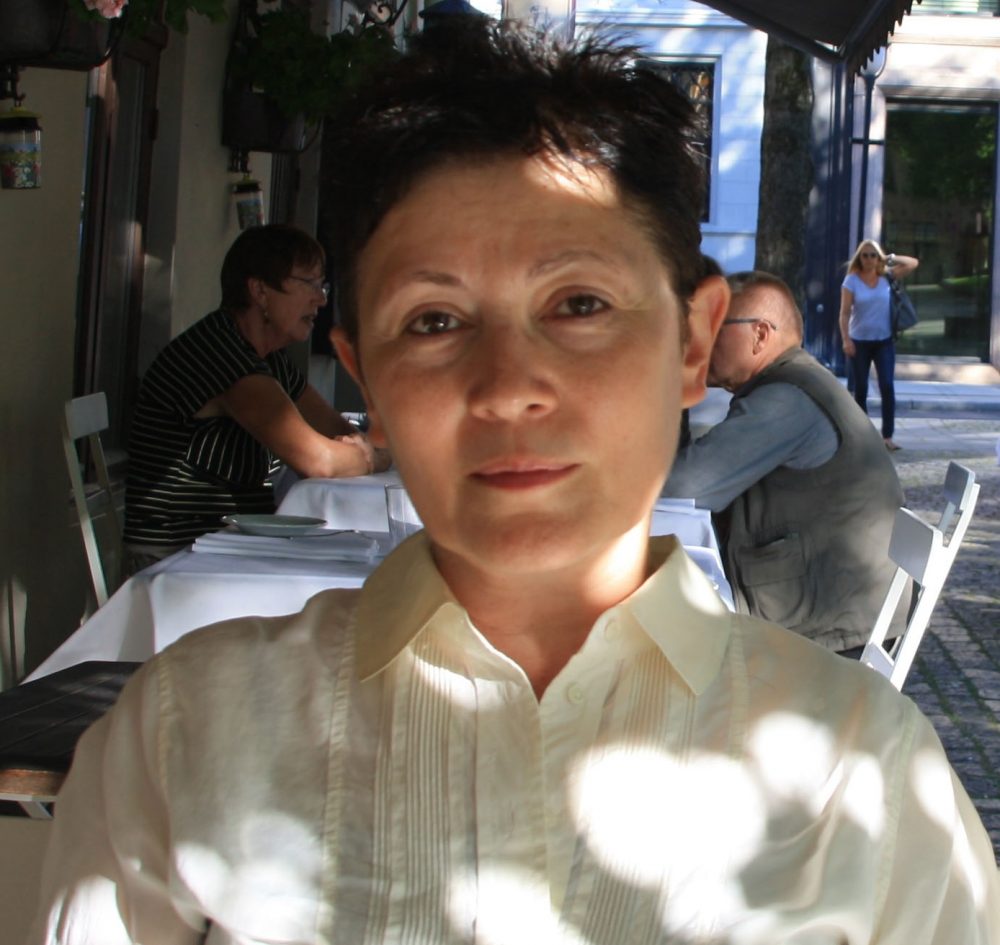 Author’s Pitch: THE BOOK OF BECOMING MOTHERS by Delia Radu

The novel’s three protagonists are all newcomers to London: Venus is a semi-nomadic Romany Gypsy house-and-wagon-wife who sells Big Issue outside a Southern railway station and talks like a poet (if only anyone were listening…); Zenaida, a Bach-loving nurse from a remote village in the Carpathians, does back-to-back night shifts in NHS hospitals while grieving and coming to terms with her mother’s recent death; and Stela, a bookworm from Bucharest, dreams, in her suburban study, of weaving together the threads of her own and the other two main characters’ lives.

To begin with, the three women are bound together by a common trauma: they’ve spent their childhood and youth in Ceausescu’s Romania. As Stela, Zenaida and Venus take turns in evoking the past, their different backgrounds – urban, rural, traveller – and distinct personalities and registers – bookish, spirited, tradition-abiding – provide a kaleidoscope of angles and viewpoints on a world plagued by fear, penury, absurdity and repression. Common themes and patterns emerge in the narrative: all three women have done their best to dodge the blows of the regime, soothe their fears by laughter, get on with their lives, find love. Yet was it for love they became mothers so suddenly, so early, or were they corralled together into motherhood by the combined forces of old-style and totalitarian-style patriarchies?

The three main characters will be bound together further by the trauma of a week spent in the same ward of a maternity hospital called Humanitas, where the treatment applied to patients seems to be coming straight from The Handmaid’s Tale’s dystopian future. Stela is the first to arrive. She’s been inside this ‘derelict, charcoal building in the shape of a cubistic crab’ just hours before, for an appointment with a consultant bribed by Mrs Lea, her mother-in-law. Officially, health care is free and for all but in reality every patient, expectant mothers included, must grease the hand of a doctor-patron in return for minimally decent care. While waiting to be seen, Stela has witnessed how the consultant detained and refused to treat two women whose life was ebbing away after back-street abortions, unless they ‘agreed to sing’. Outraged, she decided to turn this doctor’s ‘patronage’ down – ‘ruining the best delivery deal in the city’, as her mother-in-law put it – and returned home, where she carried on revising for a university exam in communist aesthetics, scheduled for the next day. While reading ideologised stock phrases such as ‘humanity does not exist, it is just an idealistic concept, unfounded scientifically, based upon individualistic whims and contingent upon societal factors’, Stela goes into labour and must return to the Humanitas hospital:

Straight back to the sombre crab-building – the habitat of a much feared, larger than human sized crab: the examination table for gynaecology, no, gynaecophobia; a whacky contraption raised on spindly legs; two claws of metal are its most striking feature – they pierce the air, and they’re screwed into a slimy board; made of grey plywood, the board is rectangular but for the space between the claws, where a curve is hollowing its shape; a rudimentary ladder with metallic rungs is fixed to the side of the installation; what are you doing, miss? playing some waiting game? up you go! – the other women around her have grown irritated; she’s so confused she can’t tell whether there are three, five of them, or a whole platoon – one has seized her bag and rummages through its contents, while another sits behind a desk leafing through her ID and giving some kind of rigmarole about opening a new file, another, who seems the kindest of them all, keeps taking notes, and another, after having helped her out of her clothes, is now nudging her to go up the ladder; balancing on the ball of the foot on the first rung, she’s bewildered by how the installation tilts under her weight; keep cool, she thinks, one more step up, easy does it, second rung, and the third, nearly there; now she’s up, facing the table, ha, ha, how simple it’d be to lie on it on one’s front, just like riding a horse with one’s face turned to its tail; but she ought to change course; the top rung is the narrowest; still on tiptoe, she pivots her painful bloated body slowly, carefully, then rests her buttocks on the plywood board while in response the contraption wobbles, and in response her hands clasp the edges of the board and now table and patient are propelling each other into endless to-and-fro movements according to the ruthless rules of dynamics – that’s what she applies herself to think, she ought to take it all in fun, yet she can’t quite shake a sensation akin to walking the plank; hey miss, what are you brooding over? the immortality of the soul? lie down presto! she obeys, stares at the ceiling without seeing a thing; her right leg goes up, inside one of the claws – a shiny calf and ankle cuff fixed on top of a metallic rod; the other leg, the other leg up, up, miss! that’s my girl… now come down, come nearer! she struggles for a few seconds, crawls forward on her back – in the end her posterior reaches the hollow in the plank; your lady garden needs a trim! no, please, there’s no need …yeah, you’ve shaven it off yourself already, ha, ha, so what? no, please will you shut your big gob up? it seems as inexorable as the rules of dynamics to let their professional claws’ nozzles, needles and razors work on her; ouch – they pinch, they sting; this little bird got into a fret; come on, let her be, she’s a babe in the wood! yeah, quite young to get knocked up, isn’t she... stay still, miss.

So Stela lay there as still as possible for a while, her parted chained legs suspended in the air like the ribs of an upside down canopy, listening to their voices and to the whirr of their instruments, thinking it was indeed as if a sewing machine met an umbrella, an open one, at that, on an operating table.

After they handed her a dressing gown – blue calico with white polka dots, the place’s uniform – she had a few words with Mrs Lea, who was dismayed by how her daughter-in-law had ruined the best delivery deal in the city and was hospitalised without a patron, like any uneducated, unconnected cow minder from the villages around. Poor Stela, Mrs Lea said, a leaf blown by an inclement – … Bang!, a door was slammed, and a nurse, the kind one who had taken notes during the consultation, emerged mid corridor. The nurse yelled from the distance, brusquely ordering the patient to follow her upstairs, then turned her back to them. Seeing how fast she was walking up the stairway, they exchanged rushed, alarmed good-byes. Stela slogged her way up, tried to catch her guide, but couldn’t, she kept moving a long way behind, and the nurse didn’t pause and didn’t look back, not even once. Stela gazed at the woman’s fleshy shoulder blades squeezed in a tight white tunic, topped by black stiff locks hoary with hair spray, scrupulously structured in the shape of a Napoleonic hat, complete with curlicues at the end of the horns on the sides. She wondered why, after affecting a cordial manner before, the nurse was now so determined to avoid even a brief, fleeting eye contact. Then it dawned on her. In all likelihood, they had inquired and discovered Stela had no patron, therefore they were now literally turning their backs on her: those were the rules in the wards of Humanitas, she was to be split in two with no arm to cling to. She stared at that bicorn hairdo, went up another flight of stairs and sensed how her humanity, no, ontological status was contingent upon that moment in history, those societal factors, the deal she had broken; a tense umbrella submitted to inane machine needlework on a strange table? what a childish joke; nor was she a leaf in the wind – the kind cliché her mother-in-law had just uttered. No, no, this is how it was: she had just mutated into some inferior organism on the ladder of creation, something like a beetle or a lizard, some living thing but whose pain and blood were not as disturbing to witness, and turn one’s back on, as the pain and blood of mammals. What a fascinating paradox to be admitted to a hospital specialising in births in order to be treated like a beast that lays eggs.

Delia Radu read Romanian and French Language and Literature at the University of Bucharest, the city where she grew up. Highlights of her work in Romania include the translation and preface of Simone de Beauvoir’s The Second Sex – a book banned by the communist censors – as well as essays and contributions in the fields of poetics and cultural anthropology. Since 1999, she’s been living in London and working for BBC World Service, with stints for Radio 4 Woman’s Hour (2007) and BBC Radio Current Affairs (2015). Her documentary Roma: A Decade On (World Service Radio, 2015) explores the predicaments and widespread discrimination facing the Eastern European Roma – a subject she has devoted herself to for many years, in both her journalism and fiction writing. The Book of Becoming Mothers is her first, unpublished yet, novel. A sequel, The Book of the Departing Father, is nearing completion. In the sequel, the three main characters are reunited again, in the streets of Bucharest, during the bloody, confusing events of Romania’s 1989 Revolution.