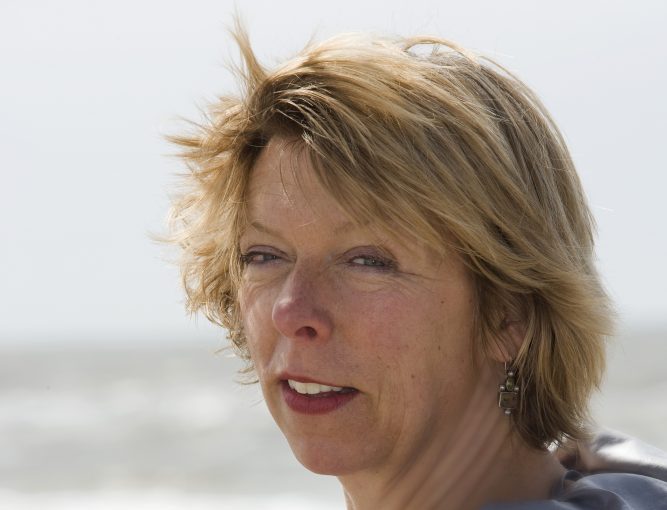 Kay has moved from the Netherlands to the United States for a job in a university town, fleeing her past – when she used to be Kathelijne – and her abusive husband. In her new country the atmosphere is nervous and fear seems to be the predominant emotion, just after 9/11.

Starting a new life proves difficult and Kay feels lonely and unbalanced. When one of her new colleagues appears to be a stalker, she illegally acquires a small pistol to defend herself. One dull Sunday afternoon she actually uses the pistol, not with the intention of shooting the colleague, but in order to kidnap an intriguing man with green eyes.

She forces him at gunpoint to her apartment, where he announces he is an angel who has come to protect her. Although Kay’s initial impulse is to get rid of him immediately, she is intrigued, and finally captivated. She becomes obsessed by the question whether the green-eyed stranger is a lunatic, a criminal, or an angel indeed. Risking everything, she accompanies him to an isolated cottage up North, surrounded by frozen-lakes. It is there she is forced to come to terms with her past and with her feelings for the stranger.

This is a story about a love affair, but also about the fear that can destroy lives and the need for trust.

The green-eyed man strides along, Kay increases her speed in order to stay right behind him. He is so close that she can smell his aftershave – a scent reminiscent of freshly mown grass, which doesn’t match this sunless autumn afternoon. In many houses the lights have already been switched on.

Kay is in her shirt, she still carries her jacket on her arm in order to hide the pistol. She is shivering. It is possible that she didn’t act in a bout of temporary madness, but in a flash of great lucidity. It is even possible that she experienced a brief moment of insight into the universal interrelatedness of things.

If that is the case, she has totally lost that insight by now.

There will be consequences, something like this cannot pass without punishment. She is wavering between disappointment and pride.

Then she notices a group of youth on the other side of the street, their long coats flapping in the wind. They are wearing brightly colored caps and are laughing wildly at the ringtone of one of their phones, which imitates the noise of a barking dog.

What if the man escapes, racing away with a laugh? She will be unable to keep up with him. He will certainly head straight for the police, will report having been kidnapped by a deranged woman. He will describe her, will demand investigation and prosecution.

Or he will merely shrug and go on with his life. At the office during daytime, in the evenings television and occasionally a drink with the guys. If he is married, he doesn’t tell his wife what has happened to him. Every once in a while, when he finds himself on his own, he thinks of that insane encounter on a quiet Sunday afternoon.

Kay concentrates on this single moment, in this chilly street: the man walking a step in front of her, she walking with quick footsteps behind him. As if he has taken the lead and she is following. She pushes the gun against his back. He turns around and smiles.

How often has she walked here, between the campus and her home. Nearly always on her own, and now suddenly in the company of a man. Up to now he automatically has taken the correct route. Or she may have let him know in one way or another, nudging him with the barrel, when to cross a street or turn a corner.

Kay feels dizzy. ‘Turn right here,’ she tells his back. Her voice is hoarse.

Her house, at the end of the street. A pointed roof, two floors, a white wooden front and a porch with a small lawn: a house like so many, a house you recognize before you have even properly looked at it.

It seems as if today Kay sees the building for the first time: a house in America, containing her apartment, with a kitchen and a bedroom, with everything she needs. Her home, a place that she has found and furnished herself.

‘This is where I live,’ she gestures with her free hand.

The man doesn’t look at the house, he looks at her. He doesn’t say anything, just like he hasn’t said anything up to now.

She leads him inside, through the corridor to the kitchen, switches the light on. `Sit down.’ Clumsily she waves her pistol in the direction of the chairs at the kitchen table.

Kay regards herself from a distance: she is leaning against the kitchen counter, her coat still stuffed under her arm, and a cool, innocent-looking pistol in her outstretched right hand.

Then she regards the man: he seems at ease, sitting on one of the not very comfortable wooden chairs, taking in the kitchen around him.

What next? No experience in life up to now has prepared her for this situation.

She gasps. ‘How do I know you aren’t lying?’ she asks. As if she is a character in a gangster movie.

His answer fits the same scenario: ‘You’ll have to trust me.’ And then, as if the thought occurs to him only now: ‘And by the way, I don’t believe that you’ll shoot me.’

‘I am dangerous,’ she could tell him, but he’s right of course, and she remains silent. He is gorgeous. Pure beauty can be repellent because such perfection is unattainable for any ordinary human being and is therefore outside of all desire. But his man has an aura of a sadness that is hardly tangible, that renders him approachable and desirable. In the café there had been a moment where she had nearly taken his hand, her fingers touching his, right before she had pressed the barrel against his arm.

She places the weapon on the counter and sits opposite him. ‘Do I frighten you?’

His hand are relaxed on the table top – narrow fingers, olive skin. ‘No.’

Kay can see that he is serious. He is not afraid, not of her, he may not be afraid of anything or anybody.

She resorts to the mechanics of everyday life, to the household quality of the situation, which is the lubricating oil aiding awkward circumstances. ‘Would you like something to drink?’

He shakes his head.

Kay doesn’t have any more questions. There is a hard wind outside, the holly sweeps its branches against the window at irregular intervals.

With difficulty she finally finds some words: ‘Why did you come with me?’

Stupid question. He came because she forced him to. His answer is unexpected: ‘I’m your guardian angel. I looked for you, I came to protect you.’

At first she doesn’t fully register what he has said, and merely reacts to those words that she does understand. ‘But I’m the one who found you. I chose yóu.’

He raises an eyebrow.

‘I don’t understand.’ She suppresses the inclination to giggle.

The man gives her a calm look. ‘You do know what a guardian angel is, don’t you? Literature is full of them. Those angels may not be described very adequately, but the concept is clear: an unearthly creature that protects humans against life’s sharp edges.’ He pauses, as if he wants to fathom her reaction. When she remains silent, he repeats: ‘I’m an angel. I have come to protect you.’

‘Protect me? Against what?’ Kay can hear a hint of hysteria in her voice.

Annette Zeelenberg (1961) is fascinated by the power of words: they can be used to create an entire world, and are able to evoke the most intimate feeling of compassion with people one has never met in real life. As such, in these times of confrontation, suspicion and fear for `the other’, literature is more important than ever before.

Annette pursued a university education (Leiden University) in English language and literature, and did a post-doc study at the University of Michigan in Ann Arbor, focusing on American war novels. After a career as an English-language journalist reporting Dutch news and as an editor at Unicef, she now works as a freelance journalist and copy writer. A quiet departure is her first novel (2010), Hotel Zero (2013) her second. She is currently working on shorter pieces, but has a new novel in mind.

And, a tip for interested publishers: info about a Dutch subsidy scheme for translations of Dutch literature: http://www.letterenfonds.nl/en/translation-subsidy