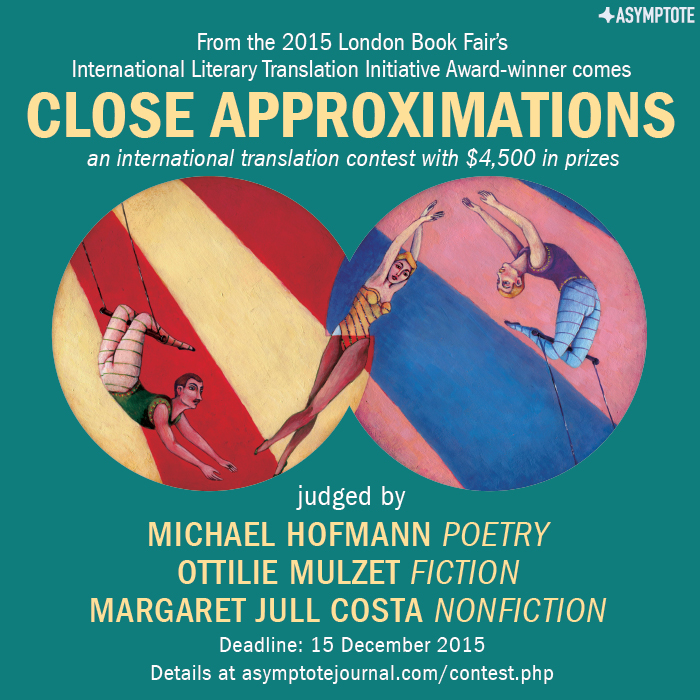 Asymptote’s translation contest is back

‘Close Approximations,’ Asymptote’s translation contest, is back with a whopping $4,500 in prizes! Open to translators at the beginning of their careers, this contest invites translations in three genres: poetry, fiction, and—a new category this year—literary nonfiction. Not only will the winning entries be published in our April 2016 issue, the winner and runner-up in each category will take home 1,000 USD and 500 USD respectively.

The first edition’s winners were picked by two Americans, Eliot Weinberger and Howard Goldblatt. This year, to mix things up a bit, we decided to look across the ocean for our panel of esteemed judges and we’re thrilled to announce the following lineup:

Michael Hofmann (Poetry) was born in Germany, and grew up in England, Scotland, Austria and the US. He has published six books of poetry, including ‘Nights in the Iron Hotel’, ‘Acrimony’ and a ‘Selected Poems’, winning a Cholmondeley Award, the Geoffrey Faber Memorial Prize, and an English Arts Council grant. In addition to numerous prose translations (all from German), he has translated volumes from Durs Grünbein (‘Ashes for Breakfast’), Günter Eich (‘Angina Days’) and Gottfried Benn (‘Impromptus’). He reviews for Poetry and the London Review of Books, and has brought out two critical collections: ‘Behind the Lines’ (2001) and ‘Where Have You Been?’ (2014) and introduced and edited the anthology ‘Twentieth Century German Poetry’ (2006). He is a member of the American Academy of Arts and Sciences and the Deutsche Akademie der Künste, and has taught at the University of Florida for 20 years.

Ottilie Mulzet (Fiction) translates from Hungarian and Mongolian. Her translation of László Krasznahorkai‘s ‘Seiobo There Below’ won the Best Translated Book Award in 2014, and in 2015, she shared the Translator’s Prize with poet and fellow translator George Szirtes for László Krasznahorkai’s lifetime achievement Man Booker International Prize. Forthcoming translations include: ‘Destruction and Sorrow beneath the Heavens’, by László Krasznahorkai (Seagull Books, 2016), ‘The Dispossessed’, by Szilárd Borbély (HarperCollins, 2016), and ‘Lazarus’, by Gábor Schein (Seagull Books, 2017). Some of Ottilie’s interviews about the work of László Krasznahorkai can be found at Quarterly Conversation; for other critical writings, see Hungarian Literature Online. In addition, she is completing a dissertation about Mongolian riddles, and a book of translations of Mongolian Buddhist legends.

Margaret Jull Costa (Nonfiction) has been a literary translator for nearly thirty years and has translated works by such writers as Eça de Queiroz, José Saramago and Javier Marías. She has won various prizes, most recently the Marsh Award for Children’s Fiction in Translation for Bernardo Atxaga‘s ‘The Adventures of Shola’. In 2013, she was invited to become a Fellow of the Royal Society of Literature and in 2014, was awarded an OBE for services to literature. In 2015, she was given an Honorary Doctorate by the University of Leeds.

Are you ready for your big break? Our window for contest submissions opens tomorrow and closes on 15 December 2015. Check out the guidelines and send in your entry now!