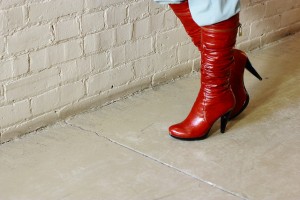 A New Romance (and new boots) by Meike Ziervogel

‘Red top and white trousers? Or white top and red trousers?’ Peirene is holding up the various clothes turning in front of the big mirror.

‘Hm? I think the red top is better.’ She drops the white one and puts the red on. ‘White trousers will work better with…‘ She doesn’t complete the sentence as she leans forward into the mirror, applying red lipstick.

‘What’s the occasion?’ I enquire.

‘I have a date.’ Peirene pauses. ‘A romantic date.’ She applies mascara and powders her face.

‘Whose the lucky one?’

‘Arsène Wenger.’ She’s completing her outfit with a red and white striped scarf and pom-pom hat.

I’m not sure about the hat. It somehow clashes with the rest of her otherwise elegant appearance. Still, I decide to keep quiet. ‘Arsène who?’ This is the first time I hear her mention this name.

She rolls her eyes. ‘Meike, where have you been? He is only the most important man in North London. The manager of Arsenal football club.’

I’m a bit confused. ‘Since when were you a football fan?’

I’m now intrigued. ‘So where will he take you?’

‘Well – ‘ the Nymph blushes. ‘He’s not really yet aware of me. But he will be soon. We are meant for each other. Not only is Arsène a Greek name – meaning a strong, virile man. More than that, Arsène and I, we have a deep connection.’ She places her hand to her heart and closes her eyes. ‘I feel it here.’ Then she opens her eyes again and explains with an earnest face: ‘Under Arsène’s management, Arsenal has been one of the top teams year in year out. But for ten years they have been unable to win the Premier League. This year their fortunes might turn. Same with us. Here we are again, longlisted for the Man Booker International prize. Which means that each year since we started we’ve been nominated for the most prestigious foreign literature prize in the entire English-speaking world. But we’ve never won. We’ve come close. But again and again we have just fallen short. Therefore – ‘ She bends down and pulls a new shoe box from underneath the bed, opens the lid and slips into shiny red boots. ‘It’s time I help our fate along. Arsène is a clever man. He’ll understand quickly that united, Peirene and Arsenal will be stronger. And unbeatable.’

She blows me a kiss and is out of the door. I smile to myself. So that’s why she decided on the white trousers. To show off her new, red, boots.

This blog was originally published as part of Peirene Press‘s series Things Syntactical. The Pain and Passion of a Small Publisher on 13 March 2016.