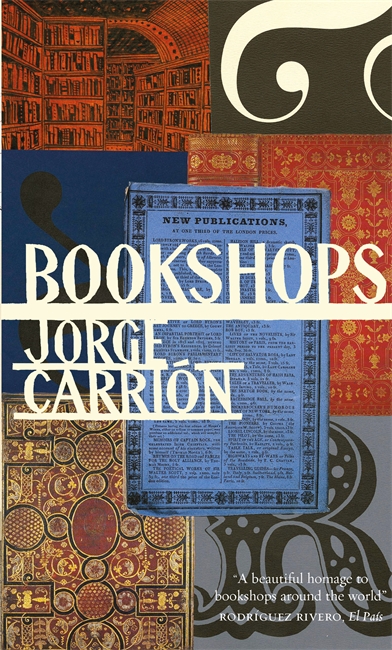 There is only one way to read, which is to browse in libraries and bookshops, wrote Doris Lessing in the introduction to The Golden Notebook (1962). That post-modernist novel famously pieces a life back together through multiple, juxtaposed experiences in and outside time and consciousness, through and because of writing, as it seeks to create a single coherent narrative out of the individual and socio-historical fragments that are our contemporary world.

In a similar way, Jorge Carrión in his gorgeously ambitious ‘biblio-topographical’ survey Bookshops seeks to trace the relationship between memory and reading, at the same time as offering almost tactile evidence of the transformative power of books and bookshops. Carrión’s global community of shops selling books (among other things) becomes a mappa mundi not only of his own cosmos and life, but of a world that depends on them for the material satisfaction of its spiritual needs, for reassurance that the commerce of words and exchange of ideas is still possible, that crossroads of people, cultures and moments of being still vitally exist.

Bookshops is a rich anecdotal inventory of the past and the present, from the Library of Alexandria and medieval peddlers to the New York Strand, from the almost ubiquitous Fnac, to Hatchards, Shakespeare and Company and John Sandoe Books. It is an essayistic journal intime (iconically in iPad or Moleskin form) of sentiment and reason, imagination and order, freedom and a world with a sense of its own identity. Free association and meditative philosophising on culture, aesthetics, history, the book as object and as vessel, are anchored on august stepping stones such as Zweig, Borges, Pirandello or Danilo Kĭs. Bowles, Bolaño, Diderot or Baudelaire also define the mood of this self-reflexively Foucauldian periplous, where poetry and the enchantment of travel, the quest for the transcendental topos of all books and all readers become the ultimate goal.

A bookshop can regenerate the social and economic fibre of an area, according to José Pinho, a famous Lisbon bookseller, and Carrión’s mission is not only to charter seminal points on an imaginative compass of books, but also to sound a note of alarm and despair with regard to the values and the direction of our world. Places of mesmerising enchantment, or simply hubs of community life, glow in his pages, often to become extinguished with an anti-climactic internet obituary, when Carrión discovers the disappearance or closure of yet another readers’ haven. Bookshops emerge in his account as ways of bringing humanity and nations together, there are bookshops that hold out a hand to create human chains, with a clear hint that the reading and writing of books, the book trade itself, are the underlying identity uniting Europe (more than any other place on the globe) even at its direst moments of crisis. Although not limited to, or circumscribed by, Europe, Bookshops is about the European project in its most idealised, i.e. simplest, most vital form: interaction, coexistence, intellectual exchange, cultural dialogue and enrichment.

Carrión’s genealogy has sharp lines and rigorous method, as well as twinkling humour and a delight in uncovering innocent astonishment and crushing irony in anecdotal commentaries and discoveries. We learn that Sylvia Beach’s Shakespeare and Company bookshop was part of the American Express circuit, and a tourist-laden coach would stop for a few minutes on rue de l’Odéon so photographs could be taken or that the success of Mein Kampf in Germany made [Hitler] think of himself as an author, which is how he describes himself in the corresponding section of his income tax returns for 1935. The stories of the persecution of Flaubert, Wilde or Baudelaire for indecency evolve into a complex reflection on the responsibility and impact of bookshops as regards our attitude to reading – the depth or lack of it. Bookshops can shape literary canons or bolster a particular regime, provide Goethe’s mächtiges Überraschung (the mighty astonishment towards the wonder of life) or stem a community’s creative flow: they are monumental giants or fat spiders crouching in a corner.

This is a polymath book for polyglot minds, for Odysseus-like spirits curious to see the cities of other men and learn the ways of their thought – and then return to one’s own roots. The crisply titled, diligently footnoted sections were clearly written at different moments, in different countries and historical realities, which is both the charm and the practical handicap of a magnum opus: the inevitable clash between atemporality and the heavily charged, fleeting moment.

Bookshops is an exuberant, unabashedly contemplative, engrossingly rich and self-assured survey of history through the act of reading and the dissemination of books, of the history and the felt presence of civilisation; a palpable topography of thought, intellectual experience and lived textuality. It is both the chronicle of a real world where books are physical entities and catalysts of the imagination, and a mythography – the creation of an epic of legendary bookshops, inhabited by legendary real or imaginary figures.

It is thrilling to follow the many threads Carrión weaves together into this thoroughly fascinating story. The richness of sources, tales, geographic locations and voices echoing throughout, will satisfy the keenest reader and bibliophile. Bookshops are the dwellings of permanence or they are the stages on life’s journey; they reflect our own definition of meaning and substance, existing as they do on the boundaries between spirituality and gross materiality; they represent our investment in the enterprise of knowledge and our commitment to a transcendent act and art of living. To honour all this Carrión composes a powerful, resonant elegy, translated with gusto and skill by Peter Bush.

Translated from the Spanish by Peter Bush