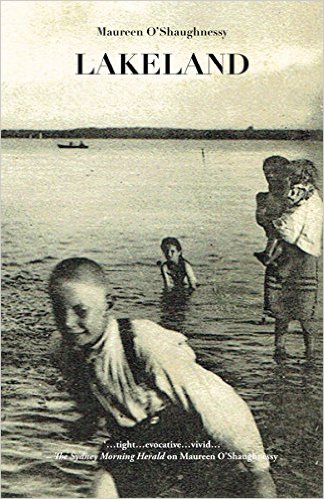 The epigraph to Lakeland comes from Eva Hoffman’s meditation on the Holocaust, After Such Knowledge: ‘Stand too close to horror, and you get fixation, paralysis, engulfment; stand too far, and you get voyeurism or forgetting. Distance matters.’

What follows is a story that tries to make sense of the actions of one ordinary family in Nazi Germany. Denied a single perspective, which would mean standing either too close or too far from the horror, we are instead given multiple perspectives in a kaleidoscope of chronologically disparate fragments. A cacophony of voices echoes through time and space in the attempt to reach some kind of meaning.

Until now, Maureen O’Shaughnessy has published mostly essays and poems, some of which have been shortlisted for various poetry prizes. Inspired by real events in O’Shaughnessy’s own family history, Lakeland marks a bold and experimental departure, both from her own work and from the conventional novel form.

This collective memoir of a family is told through letters, narrative prose, dialogue, journal entries, blog posts, poetry and photographs. We see glimpses of individual lives, spanning from 1904 to 2014 and from Germany to Australia, which we try to piece together, never quite managing to build the whole picture. But O’Shaughnessy’s lyrical prowess and mastery of evocative prose made the reading experience enjoyable and hugely enriching.

Chronologically, the story begins with Anna, a young unmarried woman who gives birth to twins in the early years of the 20th century. Her daughter Helene is later adopted by Anna’s sister so that she can marry Hans, a Prussian industrialist. During the war, he is captured by the Russians and Helene flees with their children Sieglinde and Christof from their home in what is now Poland, first to East Germany and then in 1951 to West Germany. Sieglinde later emigrates to Australia with her German husband, where they have seven children who know little of their mother’s past.

My first reading left me struggling to keep track of the relationships between the various characters and confused as to what exactly happened when. Things began to slot into place on my second reading, but only after I took a pen and some paper and started drawing family trees and timelines.

Yet perhaps the exact relationships between the characters are less important than the quest for truth that is at the heart of this book. In a long early fragment set in 1989, Sieglinde’s oldest daughter, whom we know only as ‘M’, conjures up a scene in her mind of her husband back at home, a scene she hopes ‘will help me in getting closer to the truth of things’.

Truth is found in the past and in the hidden depths beneath the surface of everyday things, we are told. Lakes are used as a recurring motif to symbolise the depths of truth, often hidden from sight. For Helene’s young twin brother, living ‘before the Führer and the NSDAP and the start of two wars […] before he realised the huge truth of his sister’s existence’, the lake is a wonderful place to be. He sees only the ‘fine green shafts of reeds lakeside’ and ‘the puffed tuftings of dandelion heads’.

For Hans, a prisoner of the Soviets in 1945, lakes are more ominous places. He thinks about previous wars that have left mines lurking at the bottom of lakes, both literally and metaphorically. These ‘past gifts of battle’, like so many aspects of the past, are dangerous and likely to explode if we venture too close.

In the final fragment, Sieglinde and her mother visit the lake in Poland where she remembers being with her father. She ‘peered into the shallows’, as if looking for a long-lost truth. The water ‘swayed with underwater grasses like tongues’, but she cannot hear the truths they may be speaking.

With great eloquence and sensitivity, O’Shaughnessy leads us to this conclusion: there is no single truth to be uncovered and it is futile to search for it. There is no single meaning to the lake, to the past or to this book – what matters is the perspective each of us brings to it.