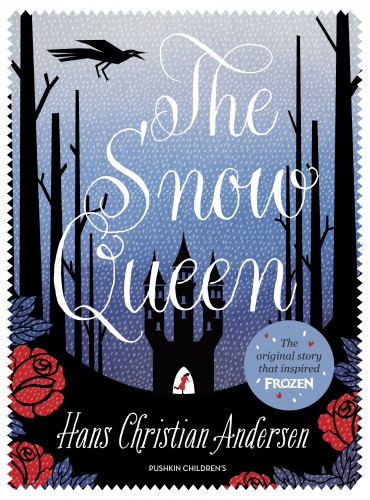 Pushkin Press’s new edition of Hans Christian Andersen’s classic fairy tale, The Snow Queen, is a reminder of just how haunting and eternally chilling a story this is. The preface itself should be required reading for anyone who has a tendency to see the worst in things. ‘Listen closely’ – we are advised – as the storyteller recalls the day that the Devil constructed a special mirror that ‘took anything that was good or lovely and shrank it to almost nothing,’ and magnified anything that ‘was useless or bad’ to make it ‘look even worse’. When the Devil’s goblins decide to fly up to Heaven and mock the angels and God himself with the mirror, it accidentally tumbles to earth and shatters into millions of pieces – each with the same destructive power as the mirror itself.

It is the boy Kai’s misfortune to be pierced in the eye and the heart by tiny splinters of the magic mirror, which transform into shards of ice, and then to be swept away by the evil Snow Queen. ‘She was clothed in the finest white gauze, which looked like it had been made from millions of starry flakes. She was exquisite but she was ice – dazzling, flashing ice – even though she was alive. Her eyes shone like two bright stars, but there was no peace or rest in them.’ Kai’s childhood sweetheart, Gerda, is left to seek him out, travelling through enchanted and forbidding landscapes to the Snow Queen’s wintry kingdom. She then melts the ice that pierces Kai’s heart with her hot tears, while her hymn – a constant refrain throughout the tale – causes the splinter in his eye to flow out, borne along by tears of his own.

Misha Hoekstra’s lively translation helps lodge this complex tale in our hearts once more, while Lucie Arnoux’s full-page illustrations fix it in the mind’s eye. Hoekstra gives the tale a modern resonance, with his translation emphasising the notion of Gerda’s ‘girl power’, as well as her state of innocence grace (whereas older translations describe her Christian humility–‘barefooted as she is’, Hoekstra has her standing ‘on her own two feet’). What this translation gains in narrative flow, it occasionally loses in religious fervour: before his salvation, Kai’s frozen game of reason centres on the word ‘Evighedan’, which is usually translated as ‘Eternity’, but is here translated, rather more prosaically, as ‘Forever’.

The Snow Queen is also accompanied by a Colouring Book.

Night of Ideas at the Institut Français Online (Copy)

22janAll Day29Night of Ideas at the Institut Français Online (Copy)