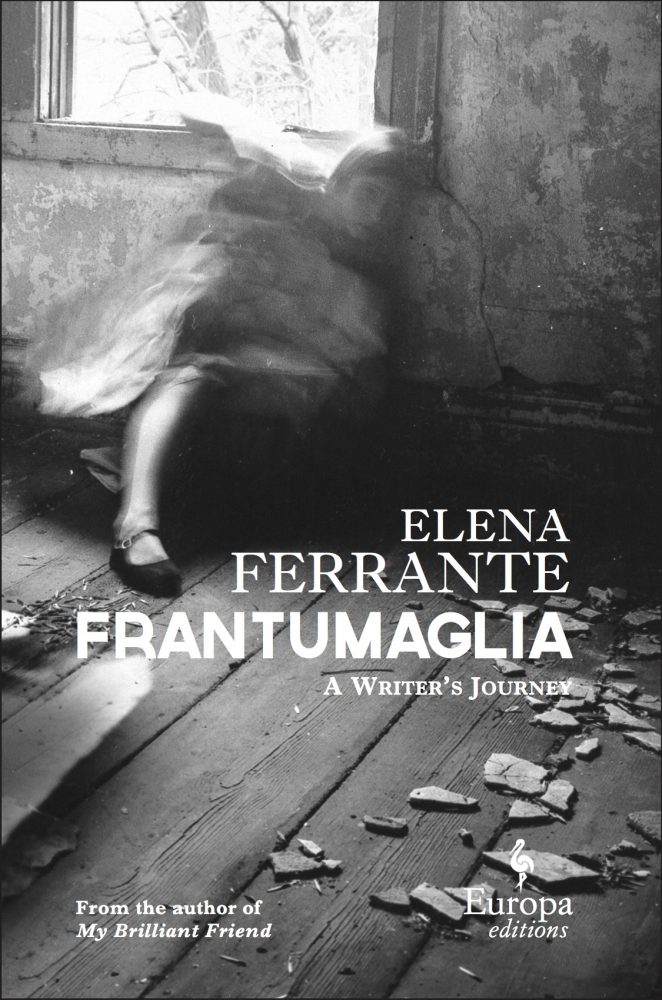 It is with some trepidation that I approach this review of Elena Ferrante’s unabridged and updated collection of papers, Frantumaglia: A Writer’s Journey. Many readers will alight on it, not just because of Ferrante’s ferocious brilliance as a novelist, but also because they long to glean some rare insights into the personal world, motivations and craft of the elusive writer herself. Elena Ferrante is, of course, a ‘nom de plume’: the Italian author has always insisted on her anonymity, and has even said it is essential to her continuing writing. The Italian publishers of Edizioni E/O and Europa Editions, however, have encouraged her to ‘dissolve’ this boundary between herself and the reader to some extent. As they explain in their introduction, they have published this collection – some letters from the author to themselves, some interviews she’s given and some correspondence with particular readers – in order to satisfy the curiosity of [her] exacting yet generous audience and to clarify we hope conclusively, the writer’s motives for remaining outside the media circus and its demands.

I am a devoted, but not uncritical reader of Ferrante. Along with legions of others, I have hungrily devoured each of Ferrante’s novels to date (in English), but I have also, very often, found myself perturbed by her ‘voice’, whether it be expressed through the persona of Elena Greco in Ferrante’s hugely acclaimed Neapolitan Quartet, or that of Delia in her first published novel Troubling Love, the novel I admit I had most trouble with. I have found myself trying to pinpoint why I have never warmed to her female characters, and why – although their raw and visceral emotions intrigue and involve me – I have never been able, as a woman, to identify with them (although I know many women who do). At the same time, the uncompromising nature of the writing and its exquisite craftsmanship excites me. Ferrante is an absolute mistress (or master) of the great beginning and ending, of charting our descent into the abyss. In the novel Days of Abandonment, I was enthralled by her ability to nose-dive from the heights of a fictional norm to within an inch of the unbearable and unreadable, and then pull out – and upwards – just in time, just before the bond between reader and author was severed.

But, even in the delineation of her most torrid scenes and imaginings, there is a dispassionate coolness that disturbs: I am not sure whether this is because of Ferrante’s fastidiousness or whether it stems from the literal rather stilted precision of Ann Goldstein’s English translation (Goldstein is Ferrante’s trusted translator). I am advised by many who have read Ferrante in the original Italian, that this is more a characteristic of the translation, and that Ferrante writes, in fact, with fluidity and intimacy.

To add to all these complex reactions comes the recent ‘unveiling’ of ‘Ferrante’ by the Italian investigative journalist Carlo Gatti, first in the Italian media then in the ‘New York Times’. This has caused such outrage in the UK and US media, and provoked such vitriol against Gatti, that it is hard not to be swept up in the outpouring of sympathy for Ferrante. However, after reading Frantamuglia – published shortly after the ‘unveiling’ – I was surprised by my own reaction. The book has left me angry. Not at Gatti for exposing a writer who – in many of these pages – so eloquently and insistently articulates her reasons for wanting to remain anonymous. Not with the evident telling of untruths that Gatti has exposed, including Ferrante’s Neapolitan background and seamstress mother. I am angry, instead, with the intellectual cat-and-mouse game that ‘Ferrante’ herself has decided to play with her interviewers and readers, which – for all the author’s feigned reticence – smacks of arrogance. Reading a couple of these interviews previously in isolation – I had enjoyed Ferrante’s interviews in the ‘Paris Review’ and ‘Frieze’ Magazine – did not have this same effect. But now I feel that, despite their best intentions, her publishers have done Ferrante a disservice: by gathering these interviews and responses together into a collection, they have exposed several of Ferrante’s self-consciously rhetorical devices and conceits. Because, of course, Ferrante does not meet her interviewees and correspondents in person or speak to them over the phone, her responses here have the deliberate and considered artifice of her writing.

The Elena Ferrante of these interviews and letters emerges, then, as a precisely crafted fiction – not just a simple pseudonym. But then why should we expect an author who writes such compelling fiction, who finds truths in lies and lies in truth, not to continue to play with her chosen form? Her voice (which again is filtered through Goldstein’s translation) is as articulate and unflinching as ever. But there is also something disingenuous in the way Ferrante repeatedly seeks to explain her decisions, frame her conditions of engagement, and dissect her reasons for being drawn into this exercise. As a result, her generosity in ‘giving so much more of herself’ to these various correspondents somehow becomes ungenerous, because it is always only on her terms.

But then, as ever with Ferrante’s writings, there are passages that are so frank and electrifying in their insights that you want to read and read them again. The interviews in which she has chosen to focus on her writing, instead of her own responses to her situation – particularly those, in which she explains why she has chosen specific words – are sometimes miraculous in their ability to capture an indescribable or unspeakable sensation. Take her explanation of the word ‘frantumuglia’ – which gives this book its title:

My mother left me a word in her dialect that she used to describe how she felt when she was racked by contradictory sensations that were tearing her apart. She said that inside her she had frantumaglia, a jumble of fragments. The frantumaglia … depressed her. Sometimes it made her dizzy, sometimes it made her mouth taste like iron. It was the word for a disquiet not otherwise definable, it referred to a miscellaneous crowd of things in her head, debris in a muddy water of the brain… When she was no longer young, the frantumaglia woke her in the middle of the night, led her to talk to herself and then feel ashamed, suggested some indecipherable tune to sing under her breath that soon faded into a sigh, drove her suddenly out of the house, leaving the stove on, the sauce burning in the pot. Often it made her weep, and since childhood the word has stayed in my mind to describe, in particular, a sudden fit of weeping for no evident reason: frantumaglia tears.

Other fascinating segments include quotations, sometimes at great length, from discarded passages from her books – which, like many of her novels, are a wonderfully disquieting read.

So what to make of Frantumaglia? Personally, I would rather return to the time when I used to stumble across the occasional odd gem of an interview with ‘Elena Ferrante’, while eagerly waiting for her next fiction to appear.

Translated from the Italian by Ann Goldstein