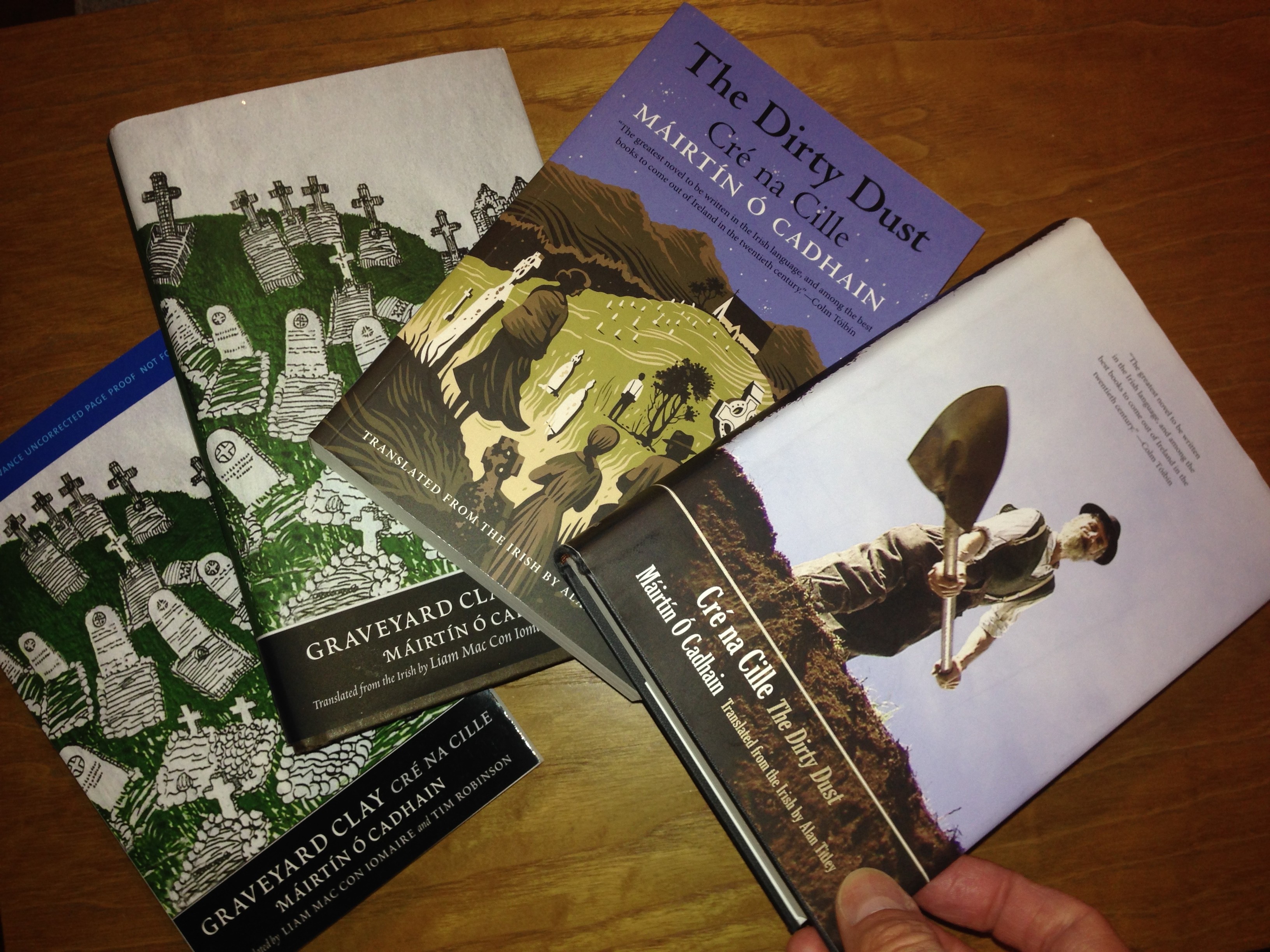 A Tale of Two Translations

It may seem an odd thing to do: within a single year to publish two separate translations of the same novel. But Yale University Press’s Margellos World Republic of Letters has done just that. Last March (2015) YUP issued Alan Titley’s masterful romp The Dirty Dust; while this spring Liam Mac Con Iomaire and Tim Robinson’s translation Graveyard Clay appears to coincide with the paperback publication of Titley’s translation.

Both books are translations of Máirtin Ó Cadhain’s seminal Irish-language work Cré na Cille. Considered possibly as the most important work in modern Irish and also one of the most significant works to come out of twentieth-century Ireland (please pause for moment to consider the mates in that particular stable!), in addition to being one of the great works of the Modernist period, there had nevertheless and incredibly been no full English version until the publication of The Dirty Dust. YUP’s Margellos World Republic series, true to its mission to ‘stimulate creative exchange’, therefore took the step of publishing both versions with the intention of sparking ‘debate and comparison’.

This venture could very easily have fallen flat: the two translations could have turned out to be too similar; the translators’ approaches to the source text in too close agreement. Fortunately for anyone interested in literary translation as an art form, and also for those who want to herald new candidates to the literary canon, the YUP/Margellos Ó Cadhain project is deliciously divisive.

YUP takes advantage of this discordance in its subtle but distinct marketing of each book: Titley’s The Dirty Dust is ‘vigorous’ and ‘full of the brio and guts of Ó Cadhain’s original’. Mac Con Iomaire and Robinson’s Graveyard Clay, on the other hand, achieves ‘a lofty goal: to convey Ó Cadhain’s meaning accurately and to meet his towering literary standards’.

As a non-Irish speaker myself, I must take YUP’s word for this description of Graveyard Clay. But I cannot deny that Titley’s version is gutsy and vivacious. However, the question of whether one translation is more successful than the other as a novel, as a work of art, or simply as a read, begs other questions about the nature of translation. These questions that can be partly answered if we examine the content of the Ó Cadhain original.

And extraordinary content it is. Cré na Cille is a novel written entirely in dialogue. And all its characters are dead. Written between 1945 and 1947, the book describes the concerns, squabbles, preoccupations and indignations (this last two given wide and varied treatment) of the dead lying in a graveyard in the region of Cois Fharraige in south Conamara during World War II.

A largely rural and fairly isolated community, the discussions between the grave-dwellers focus on the minutiae of the daily lives they have left behind: farming; church-going; family loyalties and divisions; debts owed and money spent; illnesses and accidents. However, the war and the world beyond the villages and farms do intrude. Excursions to Dublin, London and Galway are recalled = Galway is given the significant names ‘Brightcity’ in Graveyard Clay, and ‘Fancy City’ in The Dirty Dust. Hitler’s name is regularly invoked. And a foreign presence is certainly felt – in the character both of a French airman whose plane has crashed in Galway Bay and who struggles to understand his dead neighbours; and of another ‘outsider’, Dotie, for whom the quality of the local clay is no match for that of her native East Galway with its verdant plains.

The politics of the period inevitably also transfer from above- to below-ground. Cré na Cille takes place a generation after the Irish War of Independence. The grave-dwellers have lived their adult lives both as subjects of the British Empire and as citizens of a free Ireland. The significant names of the period regularly crop up: the name ‘de Valera’ is almost a refrain. Mention is made of welfare payments – being deserved or undeserved, depending on the character’s point of view. And there is even a graveyard election, mirroring an election taking place above ground.

It is this connection between the living and the dead – the continuity of existence between the world above ground, and the world of clay and dust – that is one of the most striking elements of the novel in both translations. The novel’s dead characters have lived in a Christian community, with the church and priests a significant part of their lives. Yet almost no mention is made of a spiritual dimension to their existence, either before or after death. More important to them is news from the living world, which arrives only with the burial of a new corpse. Questions abound: have their wishes been carried out by those they’ve left behind? What is the state of the land which they worked all their lives? Are their surviving partners remaining faithful to their memory? And uppermost in their minds is the issue of where they are buried: is it the pound plot, the fifteen-shilling plot, or a shamefully cheap half-guinea (ten-shilling) grave?

If there is a protagonist in Cré na Cille, it is the inimitable, irrepressible Caitriona Paudeen (Caitríona Páidín), whose arrival in the graveyard initiates the novel. Her rapid adjustment to the dead’s way of life underground, and its relative lack of importance to her, compared to how existence above-ground continues, which plot she lies in, and when her cross is to be erected, reveals the novel’s central idea: Living or dead, we endure as beings of dirt and clay and our material concerns therefore endure with us.

That endurance, in the world of Cré na Cille, is indicated by speech. And speech, by the bucket-load, is the book’s aesthetic. Caitriona is not only garrulous, her language is spiteful, lively and creatively insensitive. Her talk reveals her to be both self-absorbed and deeply intrusive. She is prolix in the most entertaining of ways; yet no one would want to meet her on a Conamara lane, least of all be buried beside her for all eternity.

It is, therefore, through Catriona that Ó Cadhain’s intention is best demonstrated. He offers the demotic, both presenting it as a vehicle for temporal concerns, but also arguing, through praxis, that, in its bawdiness, its ribaldry, and, of course, its earthiness, the demotic is among the highest of literary art forms.

For me, this intention is what splits the two different translations. One focusses more on the novel as a receptacle of Irish language; one on its status as a polemic arguing in favour of the aesthetic of the profane and the temporal.

In his note on translating Cré na Cille into Graveyard Clay, Mac Con Iomaire says that Ó Cadhain was ‘a word addict with access to a world that feasted upon its verbal riches, having little else’. Ironically, for me it is Titley’s The Dirty Dust that best captures the spirit of this feasting. The very alliteration of the title packs more punch than the presumably more accurate ‘Graveyard Clay’. Catriona’s gratifyingly plosive – and untranslatable – expletive ‘Ababúna!’ is matched by Titley with her refrain ‘I’m going to burst!’; a threat with which she ends many a diatribe, and many a chapter. Mac Con Iomaire and Robinson, on the other hand, choose to have Caitriona almost lilt: ‘I’ll explode, I will…’

In their introduction to Graveyard Clay, and quoting from an article Titley wrote for The Irish Times on publication of The Dirty Dust, Mac Con Iomaire and Robinson reference Titley’s translation. They wonder whether,

‘Initial enthusiasm regarding access to the narrative may ultimately be tempered by a more guarded analysis of [the Titley] translation’s “free-wheeling” nature in general and a markedly creative interpretation of the text’s “rich and savage demotic base” in particular.’

Perhaps, however, it is these very concerns that hobble their own attempts to convey the energy and robustness of their source material. I am unable to read Ó Cadhain’s original Irish, but having studied both translations, I find his spirit better represented by Titley than by Mac Con Iomaire and Robinson, who, in Mac Con Iomaire’s own note on translating the book, found it often ‘necessary to jump out of the footsteps of the Irish text, run round it, and fall in with it again at the next corner’.

I found myself very aware of this dance around the text; a dance Titley seems to avoid by constructing his own linguistic currency. In the Irish Times article Titley says he wanted to draw on ‘inventive Englishes, which are all around us’, and to represent an Irish which ‘had the advantage of not being squeezed into the corset of linguistic respectability, which gave it wings to fly’. This, he says, involved, ‘accessing English of a similar freedom, which was certainly available but had to be sought out’.

The result is a foul-mouthed Caitriona, more ready with curse words than Con Iomaire and Robinson’s; a Caitriona more creative with her insults, less measured in her invective. In a text absent of tag phrases or other indications of who is speaking, this means the reader instantly knows when Caitriona is holding forth. This dynamic extends to the other dead speakers in the novel. With Titley I know, amongst the deafening chatter of the graveyard, who is saying what. Unfortunately, in Graveyard Clay, the carefulness of the translation means the chatter tends towards cacophony.

It may well be that Con Iomaire and Robinson’s Graveyard Clay is a far more precise and faithful transliteration of Ó Cadhain’s text. For my money though Titley’s version, by virtue of its dirty dustiness, best conveys the spirit and intent of a masterful work.