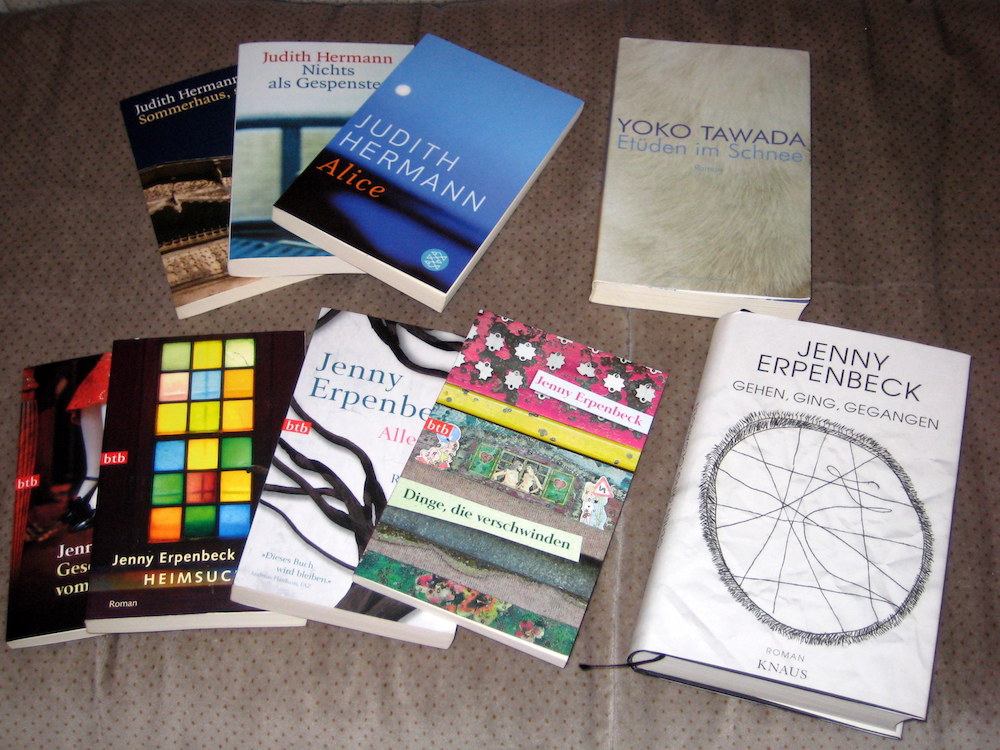 For the fifth year in a row, bloggers Lizzy (Lizzy’s Literary Life) and Caroline (Beauty is a Sleeping Cat) are using November to promote German-language literature with their German Literature Month event. Whether you see it as an opportunity to catch up on your classics or check out the latest noir novels, it is definitely an event worth checking out. Having participated each year, for the 2015 edition I’ve taken it upon myself to attempt a gender-balanced schedule, with five of my ten reads by female writers. So, with your permission, I would like to introduce you to three of these authors, who might just become your new favourites if you give their work a chance 🙂

Jenny Erpenbeck is easily the best known of the three and possibly one of the most successful contemporary German-language writers in English. After being longlisted for the Independent Foreign Fiction Prize in 2008 for The Book of Words, and then shortlisted in 2011 for Visitation, Erpenbeck (along with her translator, Susan Bernofsky) finally took the prize out this year for her novel The End of Days. While her work is accessible, a sense of unease or wariness pervades her novels, forcing the reader to examine the light prose for the hard truths beneath.

Both Visitation and The End of Days explore twentieth-century European history, with the two novels consisting of short sections starting before the wars and gradually moving closer to the present day. Where the novels differ, though, is in the way they examine the period. Where Visitation is rooted in space, allowing the reader to spy on the successive owners of a house in the east of Germany (a rather volatile place at times over the past century), the later book focuses on a character, imagining a variety of possible deaths for a woman born in the Austro-Hungarian Empire. Each time her death is ‘rewritten’, the next section sees a later scene from her life, with new threats including Nazis, Communist officials and, eventually, old age.

Erpenbeck’s latest novel, a longer affair, has also become her most timely. Gehen, ging, gegangen (Go, Went, Gone), a novel examining a retired academic’s interactions with a group of asylum seekers in Berlin, came out in August at the height of the refugee crisis in Europe. An entertaining, thought-provoking book, it can only increase Erpenebeck’s stocks in English; sadly, though, with Bernofsky otherwise occupied, it will be a while before this one appears in the UK…

The same is probably true of the latest work of our second writer, Judith Hermann. Aller Liebe Anfang (The Start of Love) came out recently, and it’s another I’ll be trying this month. However, for those unable to read the original, her first three works are available in translation (all by Margot Bettauer Dembo).

Her best known (and, possibly, most popular) work is Summerhouse, Later/The Summerhouse, a collection of short stories set in and around Berlin, which tell of hot days and crazy nights for the young people of the capital in the 1990s. Her follow-up work, Nothing but Ghosts, which made the 2006 IFFP longlist, consists of much longer pieces, taking Hermann’s show on the road with stops in Iceland, Prague and America. Some readers may know Hermann best for her most recent translation into English, though. Alice was shortlisted for the IFFP in 2012, and while not everyone loved it, I enjoyed her thematically linked collection: five stories and one woman, a book dealing with life, loss and moving on after the death of loved ones.

Our third writer is one who is still fairly new to me, but an author whose work I’d like to explore more. Yoko Tawada was born in Japan, moving to Germany as an adult to study in Hamburg. Writing in both Japanese and German, she has the unique honour of having won the prestigious Akutagawa Prize in Japanese and the Adelbert von Chamisso Prize for non-native writers of German.

As far as I’m aware, none of her work is available in British editions; however, in the US, New Directions have brought out several of her works (The Bridegroom was a Dog, The Naked Eye, Facing the Bridge, Where Europe Begins). My first experience of Tawada’s work was one of her Japanese books (in French translation – the French do tend to be ahead of us in these matters…), and I’m currently reading her latest German-language novel, Etüden im Schnee (Études in the Snow). This one will be out next year in Susan Bernofsky’s translation – I’ll be sure to let you know what I think 🙂

There you have it – three interesting names in contemporary German-language literature. If your excuse for not reading books by female German-language writers was a lack of suggestions, that is no longer the case… Here’s hoping I’ve inspired a few readers to join the GLM throng – why don’t you join us for a book or two? We would love to have you on board 🙂