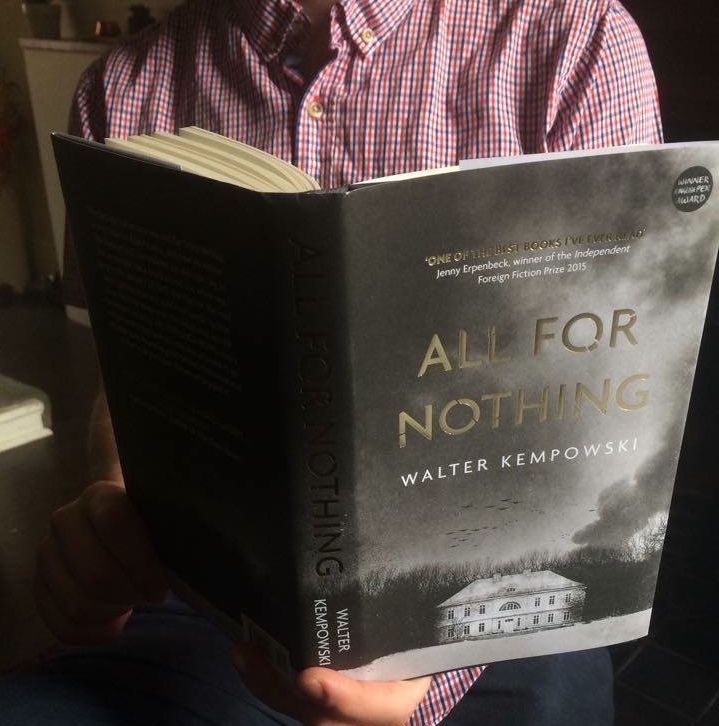 ‪#‎RivetingReviews‬: Alex Moran reviews ALL FOR NOTHING by Walter Kempowski

‘All for Nothing’ (Alles Umsonst)

Translated from German by Anthea Bell

War continues to rage in the winter of 1945, but the quiet Gorgenhof estate, nestled in the snowy plains of East Prussia, is unsettlingly removed from the reality of war. The inherited manor is home to the von Globigs, descendants of Wilhelm aristocracy, penniless after ill-fated business ventures. The father Eberhard is absent, serving as an administrator to the Reich in Italy. Meanwhile, his reclusive wife Katharina and their impassive twelve-year old son Peter lead secluded lives on the vast estate. What love the von Globigs might have for one another is strangely tenuous, weakened perhaps by the sudden loss of Elfie, daughter and sister, who succumbed to scarlet fever two years previously. An even wider gulf lies between the family and their staff: ‘Auntie’, a Silesian spinster and dutiful housekeeper who secretly longs for warmth and reward from the von Globigs; two boisterous Ukrainian girls who run the kitchen; and Vladimir, a stoical, practical Polish man who sees to the horses and livestock.

Radio transmissions and the tales of passing travelers are the only source of information, and everything the Gorgenhof residents hear may very well be embellished or twisted – how are they to know any different?

As the Red Army prepares for an almighty assault, the von Globigs and Auntie concern themselves with the value of their belongings, or the number of silver spoons missing in their collection. They seem ever-more naïve and vulnerable as their trivial frustrations lead to recklessness and, inevitably, an unwelcome arrival.

All for Nothing (‘Alles Umsonst’) is the most celebrated novel by the late German author and historian, Walter Kempowski (1929 – 2007). As a young boy, Kempowski was like many young Germans forced to join the Hitler Youth. Kempowski later also served with the German Air Force. In 1948, he was sentenced to twenty-five years in a Soviet prison for espionage. He served eight, and then spent two decades compiling the hugely ambitious and widely revered Echolot (‘Sonar’), a dossier of memoirs, documents and photographs from the Second World War. In these twenty years he relived the lives and memories of thousands of Germans and depicting the era he and they grew up in. He accumulated an incredible body of knowledge, and it colours every page of his final book, All for Nothing, with nuanced, vivid detail.

Originally published in 2006, and recently (and brilliantly) translated into English by Anthea Bell (translator of Austerlitz), English readers can now experience one of Germany’s most influential postwar novels, credited with helping the German people come to terms with their country’s past.

Kempowski approaches All for Nothing like the historian he was. In the same way young Peter scrutinises dried blood under a microscope in one scene, Kempowski adopts an objective, almost clinical, tone to reinforce the von Globig’s emotional distance and separation from humanity. This approach contributes insidiously to a sense of detachment as the family and staff sink deeper into their small worlds, each becoming as isolated as the Gorgenhof estate itself and it muffles the blow when the inhabitants are finally forced to flee and face the horrors of war. The characters observe the devastation with curiosity, even indifference, but rarely with emotion.

As a reader, Kempowski’s tactic often left me cold, which is perhaps the point, but I felt it was an awkward route to the reader’s heart. That said, the story has a perturbing, contemporary resonance. Today we witness real horror stories from the cool glow of our smartphones and TV screens in our heated, sheltered homes. Many of us are residing in a Gorgenhof of our own, and despite the distant reminders of the terrors we face, we can only truly comprehend them once they’ve arrived on our doorstep.