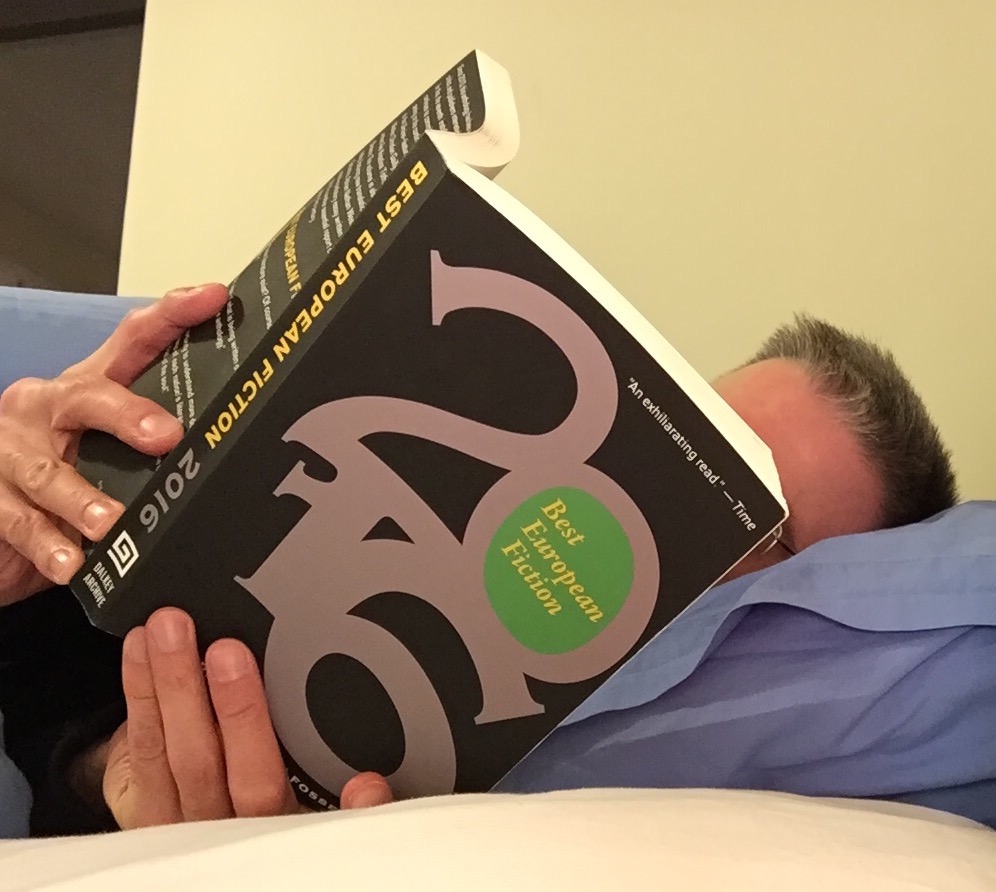 In his preface to Best European Fiction 2016 – the seventh in Dalkey Archive Press’s annual collections of fiction from the continent – Jon Fosse offers assertive definitions of both fiction and literature. The elder statesman of Norwegian letters, in pugnacious style, describes literature as writing ‘in which form and content is one and the same’ and fiction ‘something imagined … instead of something referred to.’ He even singles out crime fiction as ‘the opposite’ of literature.

Whether you agree or disagree with all or part of Fosse’s provocative polemic, it provides useful standards against which to judge the work provided in Dalkey Archive’s collection, and in its new rival, Essential New European Literature – Vol. I, the first book publication from quarterly journal Trafika Europe.

Looking across these two compilations of contemporary, mostly translated European writing – both wide-ranging, both drawing work from established and new voices, and both show-casing the efforts of oft-ignored translators – one piece in particular stands out as meeting Fosse’s criteria for literature and fiction. This is the excerpt from Wiesław Myśliwski’s A Treatise on Shelling Beans, which heads up Trafika Europe’s collection. Here, exquisite prose combines with a narrative form that in and of itself engages the reader, at the same time as reflecting on the content for which it is the vehicle. A holiday-complex caretaker recounts a matryoshka of stories – about a priest working on a building site, a waitress in the site cafeteria, her sham wedding with an engineer, and finally the narrator’s own unrequited love. In Fosse’s terms, the excerpt is strikingly ‘unified’ and ‘harmonic’.

BEF 2016 starts out in similar style, with a piece that passes the Fosse literature test, by an author well-established in his country and at the top of his literary game: Josef Winkler’s ‘The Word Flew Away’ is a keenly observed memory of childhood in rural Austria. Focussing on the narrator’s experiences of how death draws and redraws the dynamics of his family, Winkler interpolates the various scenes with quotes from the work of his fellow Austrian writer Peter Handke. Perhaps the most apt of these is the observation that writing is ‘the deciphered evocation of childhood’ – a perfect description of the story Winkler is writing.

Work deeper into both collections, however, and Fosse’s strictures begin to break down; although in their very disintegration they remain useful reading tools. ‘Evocations of childhood’ seem to dominate both books, and in exploring why this might be, the reader comes across material that does refer to something outside its hermetic literary universe, stories that ‘pretend to point directly towards a reality beyond language’ (Fosse’s description of writing that is not literature) yet manage to remain literary.

Both collections feature Margita Gailitis’s powerful translations of pieces by Latvian writer, Māra Zālīte. These are autobiographical stories drawn from Zālīte’s family’s return to Latvia after their deportation to Siberia by the Soviet regime. The great strength of Zālīte’s work is her representation of the acute pain of displacement; of a child’s ability to sense danger and difference but not fully to comprehend them; of her efforts to make sense of her journey; and of her appreciation of the power of lies. The reality these elements refer to is virtually impossible to avoid.

‘Golden Town’, Tsotne Tskhvediani’s BEF story about the promise of riches and the reality of desperate poverty in a Georgian gold-mining town, is also told from the point of view of a child. Like the Zālīte pieces, this boy’s diminishing innocence, his partial understanding of hope and disappointment, and his scepticism about the mythic treasure beneath his family’s feet, can only refer to a reality outside the story – in this case post-Soviet experiments with capitalism.

The extreme changes Europe has undergone in recent decades are represented not just by awakenings from childhood innocence, but also by experiences from the other end of the age spectrum. In BEF’s ‘Son, Please’, Ukrainian, Artem Chapeye explores an old woman’s struggle to meet the demands of her alcoholic grandson by selling vegetables illegally in the street. Also in BEF, Estonian Ilmar Taska’s ‘Apartment for Rent’ shows an older woman’s heart-rending attempts at human contact. Offering the temptation of a furnished flat, she lures young men to share her hot chocolate and engage in conversation about Soviet Realism.

Thus, as Andrew Singer, Director at Trafika Europe says in his foreword to Essential New European Literature, perhaps in unwitting opposition to Jon Fosse, ‘this sort of cultural window can give surprising insight into where we’ve been, and where we’re at today in Europe’.

Indeed, by reading these two impressive collections, we not only see the domestic effects of Europe’s recent seismic social and political changes, we witness the shifting sands and cultural fluidity this history has prompted. For, across the books, people are moving – from Siberia back home to Latvia in Māra Zālīte’s work – and from Lithuania to London in Paulina Pukyte’s BEF piece about immigration and the language of language barriers. Again in BEF, Hungarian Kriztina Toth’s excerpt from Pixel demonstrates the confusion of nations, languages and cultures that now dominate Europe; and does this by second-guessing locations, spellings, names and even genders on the very page. (And in so doing she qualifies herself for Fosse’s ‘strong and good author’ category).

On a micro scale, we even see, in Huw Lawrence’s BEF story, ‘Restocking’, Welsh hill-farmers’ post-war drift down to the ‘Flat land, flat people’ of nearby towns and valleys. This, the last piece in BEF, leaves the reader with a sense of a Europe in flux – past traumas and dislocations dominating the present. To return to Andrew Singer’s words: ‘As for where we’re going, well, that’s up to us.’

Fosse’s literary rules and Singer’s suggestions that literature has external reference points fuse in some of the poetry Essential New European Literature offers. Exemplifying Europe’s ‘quilt of overlapping people and nations’, this collection offers translations from some true minority languages. There is, for instance, Occitan, the tongue of Languedoc, used by Aurélia Lassaque in her lyrical verses that focus on the natural world. And there is Shetland Scots from the current Scottish Makar (poet laureate), Christine De Luca, in her poems treating of the landscape of the human body.

But it is in the fifteen-poem ‘sonnet wreath’ of László Sárközi that we best see both the marriage of form and content so revered by Fosse and the discussion of an external reality described by Singer. Fourteen of these sonnets use as their first line the last line from the previous sonnet. The fifteenth poem is a ‘master sonnet’ created from these same fourteen lines. Through the complexity and rigour of this self-imposed structure Sárközi explores his dual Hungarian and Roma identity, the ‘two swords’ he wears: ‘And I invent anew my own small world/ I hated – yet I can’t transcend my blood’.

Expansively, in the prose of Best European Fiction, and on a smaller scale, in the poetry and prose of newcomer Essential New European Literature, we see the literary landscape of a Europe that is struggling to move forward, but must, of necessity, pull with it the chains of its past. In Fosse’s terms, some of this work is ‘literature’, is ‘fiction’ – fusing content and form into harmonic wholes, each piece ‘its own cosmos’. But some of this work does point to a reality beyond the page, and is powerful and legitimate for that.

Is either collection a complete literary success? No – in the way that no journey is an unmitigated delight. Some of the formal experiments lack the content to match the ambition of their enterprise. Some intriguing stories are aesthetically unsuccessful. But these books certainly demonstrate, in their differing ways, that the European experience is being intelligently documented; that from this documentation literature can be created, and that this literature, disseminated through translation, represents a way, as Fosse says, ‘to make life endurable’ for as many as can pick up a book and read English.

More information about both anthologies: