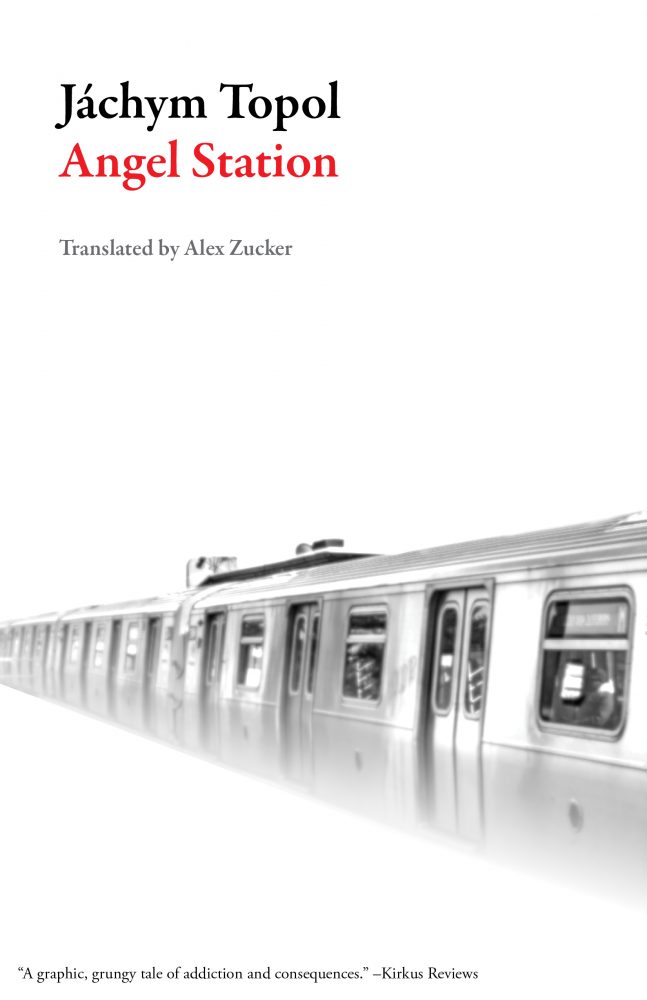 Dalkey Archive has published Alex Zucker’s translation of Jáchym Topol’s Angel Station (‘Anděl’, 1995), thus rounding off the English versions of Topol’s Prague trilogy. An odd trilogy of translation in some ways, beginning with the short novella, or episodic fragments, of Trip To The Train Station (1995) and moving through the vast and almost magic realist reach of the 500 pages of City Sister Silver(2000 & Czech edition ‘Sestra’, 1994) . It has taken a long time for the 140 pages of Angel Station to join the other two in English, but it’s been well worth the wait.

Topol started off as a poet, publishing two books of poetry before any prose, and Angel Station throughout, even at its narrative edge, has the intensity of prose poetry: quite an achievement to maintain across its difficult trajectories. The narrative is episodic, fragmented, centring all the while around the ‘dark hole’ of the subway station of Anděl in Smíchov, Praha 5, whirling in effect round a vortex which sucks in both bodies and minds. One of the ‘heroes’ (better, ‘anti-heroes’) of the novel, Hooks, is in and out of the same mental asylum and many of the characters live their lives on edges of various sorts: paranoia, homelessness, vacancy, oblivion. The novel straddles the years of change in Czech society marked by the break-up of the Soviet system: the men and women local to the pub (Anděl takes its name from its C19th pub U zlatého anděla, ‘The Golden Angel’) expecting security raids, a few years on are enmeshed in the venal ennui engendered by the free market. If Topol’s vision is ‘dystopic’ though, throughout the novel he shows a sure and acute instinct for human frailties and hidden signs that make, or break, personal relationships or calm lives.

Reading the translation over twenty years on from the original, we are engaging with a lost or changed landscape: the whole of Anděl was regenerated shortly after Topol wrote his trilogy, a vast shopping mall replacing the narrow streets and mental vortices of the earlier cityscape. Most likely this was intentional urban planning, of the sort that has happened, and still happens, everywhere, in the vain attempt to curb, if not populations, then social behaviours. Topol’s instincts as a writer are always to stay on the side of people and of hidden zones. It’s exhilarating to read this novel in London which has its own Angel Station that was redeveloped at much the same time as Anděl in Praha, with similar gentrifications and concomitant resistances.

Alex Zucker translated both of the earlier parts of the trilogy, and with Angel Station he’s managed to go further into the lyric of the work, achieving a level of English that seems to echo the timbre of the Czech and match its ability to be solid to the ground and free in the air at the same time. The opening sentence is as good a taster as any with the reiterated ‘s’ sounds of its second sentence in English: There was light above the buildings. High up in the faraway sky, falling in strips, then in a seamless layer, the solid white curtain slammed down into the city, swallowing it up, shrouding it from the universe, it fell suddenly, snapping down like a shop window blind.

It’s worth reading on…

Translated from the Czech by Alex Zucker