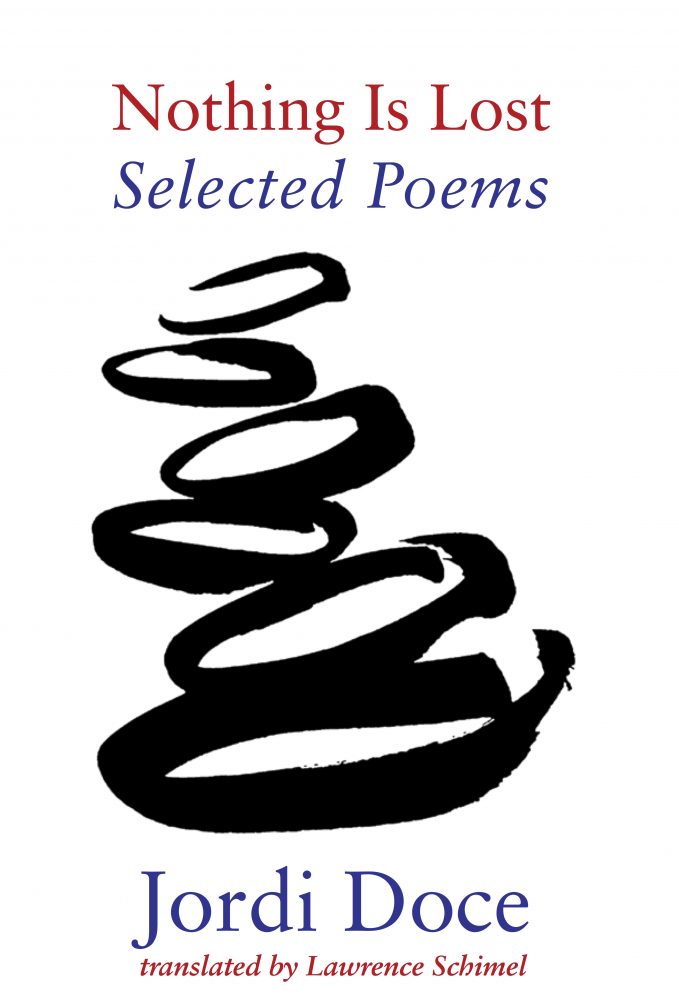 Emily Dickinson said that she knew she was reading a poem if she felt that, the top of her head were taken off. This image seems incongruously violent as if reading a good poem was like settling the barrel of a shotgun in your mouth and pulling the trigger. Yet it expresses vividly how poetry can unsettle our perceptions of the world. Jordi Doce’s work doesn’t spatter your brains on the ceiling, it lifts the top of your head gently and stirs the settled mud of preconception. Dawn is the growing insistence of its sounds and the sun hurts / like a fistful of broken needles. Doce is, however, far removed from the self-indulgent Martian who wrote Craig Raine’s post cards. Every one of his finely wrought images arises naturally as a wave out of the emotional undertow of the poem. As Vicente Luis Mora notes in his introduction, Doce prefers a ‘“configural” poetry, which [avoids] falling into a… subjective, expressionist swamp’. His devotion to his craft has secured him a reputation as one of Spain’s most gifted contemporary poets.

Every good selection of poems takes you on a journey with the poet as their voice develops. Poets usually learn their craft by being ventriloquists and mimicking other voices. Heaney’s “Death of a Naturalist”, for example, echoed Hughes’s celebration of the war between vitality and death. Mora notes that Doce’s poetry had an initial darker’ phase which also had its roots in the English tradition. He has translated numerous English language writers, whose influence perhaps shaped the empiricism of his poetry. Every poetic translation is an act of ventriloquism – the poet speaks without moving their lips in a tongue that is not their own. Similarly every poet is a ventriloquist who learns by mimicking other voices so that they may speak more clearly. “Sylvia Plath” channels its eponymous subject’s voice as perfectly as if Doce were a medium through which the dead poet spoke:

I can feel the sea or a background of bells.

The noise of the gulls comforts me, eases

My attacks. From time to time a nurse

Adjusts the pillow or tucks in the sheets

Doce captures perfectly the passivity of Plath’s voice in poems such as Tulips:

I am nobody; I have nothing to do with explosions.

And my history to the anaesthetist and my body to surgeons.

The English language poetic tradition Doce is drawing on in this period is imbued with the sense of a fallen world that can be redeemed. Plath is haunted by her more perfect twin the new absolutely white one and Blake fights mentally for a new Jerusalem. Doce’s early work is marked by this English yearning for redemption and an intoxicated experimentation.

Van Gogh the lights of a forgotten brothel

that leads nowhere except to death what whisper death is

he sprinkles turpentine upon the profaned canvas behind an implacable

knife sliced the ear chosen by madness Paris the lindens

in the park embracing a sun spilled at every moment

“Brighton” is written in gently modulated quatrains that echo the Heaney of Field Work:

Midway through that strange journey

Brighton was our refuge:

a palace beside the sea,

the water green and fertile

Doce seems to be exploring different voices here and perhaps, in part, learning to be a Spanish poet by engaging with English language poetry. “Belfast, July 1988” has the neatly Heaneyesque phrase of “purged light” and shades of both Plath and Eliot haunt poems such as “Rooks”.

the rooks return to the vacant lot,

but there their shrieking

a single syllable that taps,

It is my name, says the thirst.

It is my name, says the waiting.

As Doce’s poetry develops, you sense that he is moving away from the ventriloquism of his English phase. “The Poem’s Preambles” is a prose piece that seems to owe no debt to any of his English exemplars. The act of writing onto a new page is beautifully and naturally embodied in the act of treading on virgin snow. The blankness of the snow and the blankness of the page evoke Doce’s liberation from the troubled concern with memory in his early work. The poems have a more liquid, disembodied quality as darkness and dusk liberates form from its visual solidity:

In this hesitant hour that falls

between ash and blue,

in the quiet haze and secluded

air of this garden

where the damp tastes of earth

Rehearsal for a Flight

Doce is beginning to eschew the search for meaning that reflected the Englishness of his early work. The ironically titled “Creed” is an eloquent statement of the belief that all we can believe in is the impossibility of belief:

And why, for whom,

when we look for meaning. There are no reasons

or reasons elude us…

The densely wrought phraseology that reflected the empirical “Englishness” of his early work has been displaced by an adroit use of space and silence. “Warning” reads like a critique of his earlier striving to sketch reality as precisely as a wildlife artist:

Not even if you paint it

to scale or in relief,

the beak in its place, feathers

as prescribed by the manual,

not even then will that little fowl

take off in flight, or end up

you won’t fill your belly,

play acting with snare and net.

The poem instead suggests that you need to make a hollow in air for the bird to come or to shirk your hand / and thus the shadow.

The hollow created by Doce’s poems and his eschewing of the shadowy hand of tradition becomes as fecund as a rain forest. The playful sequence “Bestiary” creates four beautiful prose poems that combine a pastiche of encyclopaedic description with some finely tuned metaphors. However, much of the poetry now concerns the relationship between ourselves and the landscape. Doce’s work is increasingly imbued with Keats’s negative capability when man is capable of being in uncertainties. Mysteries, doubts, without any irritable reaching after fact and reason. “Joy” celebrates the happiness that can occur when the mind is silent:

but a sun rises up

before my eyes, which already forget

tree that offers light, not shadow,

I smile, without knowing why.

The rapture in the act of observation itself is reminiscent of some Japanese poetry, a theme developed further by “Marina”, which is a sequence of haikus and a single coherent narrative:

Go down to the dock.

Where the seawater batters

upon the pier. Who had berthed

However, the meditation on landscape dominating much of Doce’s work recollects another poet Doce has translated, Charles Tomlinson. These writers share a facility for the kind of “witty” observation Eliot identified in Donne. Tomlinson’s rejection of confessional poetry accords with Doce’s focus on craft and observation in his later work. If we compare Doce’s poem “On the Terrace” with Tomlinson’s “All Afternoon” the affinity of these two voices is apparent:

Another day, with the slow force of habit,

the stage of the afternoon ripens,

(rooftops and gardens, the canal’s course

with trees in the background,

which embraces the observer

in a map of absences,

where forms give way

to the slow disappearance of themselves.

All afternoon the shadows have been building

A city of their own within the streets,

With dark diagonals, and paring back

Sidewalks into catwalks, strips of bright

Companionways, as if it were a ship

It is of course impossible to reduce a poet to the sum total of their influences. English Literature, Doce notes, has given me a much-needed vantage point from which to examine and re-evaluate my own Spanish tradition. Doce may insist on the indebtedness of his work to Spanish literature, but his recasting of English poetic techniques has given him a unique voice. The most recent poems in this selection, dating from 2006 to 2010, have the metaphysical wit of his earlier work but are restlessly experimental. However, every line a poet writes reflects all that went before: as Doce says nothing is lost.

I am reviewing a book of translated poetry, yet it reads as if it had originally been written in English. Doce’s work may at times have been on a kind of round trip, with the poetic tropes he has freighted into Spanish being lovingly reimported by Schimel. Every translation is, as we have noted, an act of ventriloquism: we can only ever hear the translator’s voice but they must listen closely to their author and aim to sing at the same pitch. Schimel’s translations work beautifully as poems in English and that is perhaps the greatest tribute I can pay to them. However, Doce, a literary translator himself, sounds a note of caution, playfully suggesting that some of the authors:

… to whom I gave my voice

that those lines are not theirs,

that they are missing a beat,

while I, failing against my will,

hiding under their names, told

the story of my days.

The best literary translations, however, allow us to hear two voices while believing we are only hearing the voice of the original author. Schimel’s command of the resources of English poetry allows him to perform the literary translator’s greatest conjuring trick and make himself disappear.

Nothing is Lost: Selected Poems

Steve Komarnyckyj is a literary translator, poet and co director of the PEN award winning publisher Kalyna Language Press. He fills the spaces between writing by running around after his mini menagerie of cats and dogs.