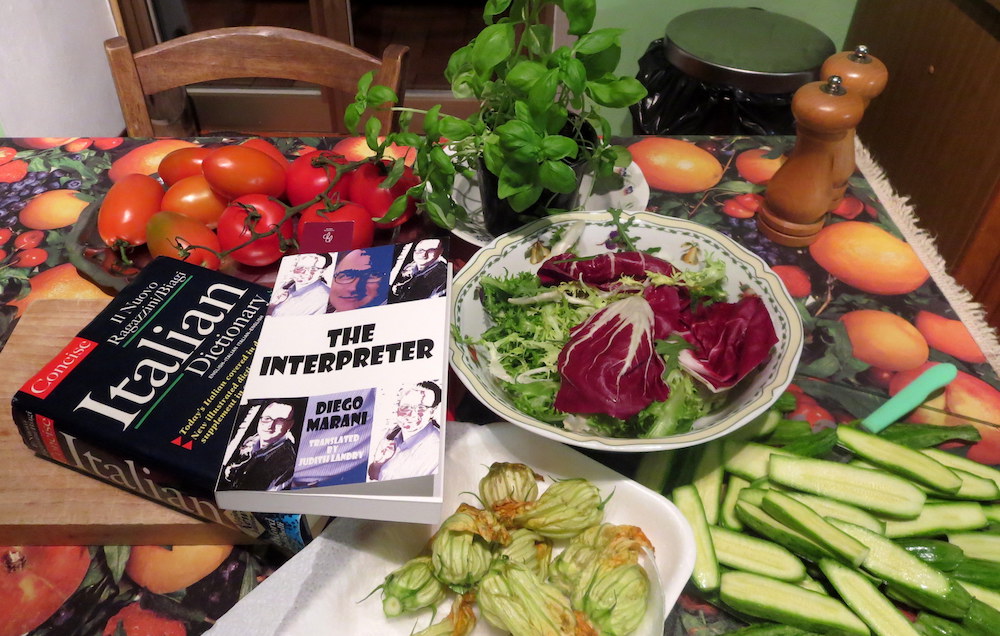 Languages are like toothbrushes; the only one you should put into your mouth is your own.

On May 11th 2016 we will be holding our 8th European Literature Night at the British Library in London. This year we have sixty-five nominations from all over Europe, which I, and my merry band of ELN judges, have to whittle down to six. Impossible and unfair, you may say, and we can only agree with you, as we are in most cases having to choose from among Europe’s leading writers in their own countries. It’s thanks to European Literature Night that I first read and met Diego Marani, the brilliant Italian author who is the subject of this review with his newly translated novel The Interpreter. Rarely for ELN, Marani has been selected by the judges twice: in 2011 for his novel New Finnish Grammar, (which became a major publishing success in the UK), and in 2014 for his Catholic Church-satire, God’s Dog. At both ELN events, Marani amused us all with his performance of ‘Europanto’, the language he invented – and occasionally writes in – drawing on his own immense linguistic prowess, his profession as interpreter in charge of multilingualism at the European Union in Brussels and his ‘hobby’ writing novels – he’s written eight and they’re all good. The latest, The Interpreter is gloriously grotesque and as witty and profound as Marani himself.

The Interpreter – the PR blurb declares – follows on from New Finnish Grammar and The Last of the Vostyachs to form a trilogy on the theme of language and identity. So far, so true, but the blurb should also issue a warning to interpreters and linguists, as this is the most frightening take on their profession ever! Attention les interpretes! It is a macabre linguistic thriller and with it Marani has possibly pioneered a new genre, l’interprete noir. Was he trying to get himself fired from the Brussels bureaucracy? Or maybe working in a Brussels DG drives people mad?

Here’s the story – lifted from the publisher’s own blurb (why rework a text some diligent PR has spent days writing and which genuinely reflects the book?):

An interpreter at the UN in Geneva seems to be suffering from a mysterious illness when his translations become unintelligible and resemble no known language. He insists he is not ill and that he is on the verge of discovering the primordial language once spoken by all living creatures. His predicament is soon forgotten when he disappears and things can return to normal. The interpreter’s boss starts to have problems in talking and seems to be speaking the same gibberish as the missing interpreter. He seeks help in a Sanatorium in Munich but reaches the conclusion he must talk to his missing colleague to understand what has happened to him and to have any hope of a cure. He follows the trail of the missing interpreter around Europe as his life undergoes profound changes and he is forced to confront the darker side of life.

Intrigued? The Interpreter is Kafka meets Kazuo Ishiguro meets Dr. Who: read it and you’ll know what I mean. Carefully crafted, psychologically intriguing and philosophically profound, I was convinced on all levels. And the translation is beautiful. Judith Landry has translated all Marani’s novels – he’s lucky to have her.

The Interpreter is a clever satire on bureaucracies, therapy, language, identity, Switzerland and on our whole big, bad mad world. The protagonist Felix Bellamy is a peace-loving, inoffensive Swiss bureaucrat, a mono-linguistic boss of the language and interpretation department at the UN in Geneva; his job is trouble-free and anodyne – which makes his murderous quest to hunt down the missing multilingual interpreter and the missing ‘primordial language’ even more daring and hilarious. Here is Felix Bellamy commenting on his colleagues:

In my heart of hearts I’ve always had trouble with polyglots. Above all, because those who vaunt a knowledge of many languages have always struck me as show-offs. No human being can really be capable of speaking the tongues of so many others equally well; anyone venturing to do so is embarking on an unhealthy exercise which can only lead to mental instability.

It is an insanely moral tale. Our sanity, our logic and our morality are put to the test – I certainly doubted my own reading this. But the novel’s ending is of such sweet logic that I was open-mouthed with amazement. Diego Marani has put all his talents to great use – as a wit, writer, linguist and bureaucrat. He also resembles a mad professor gleefully voicing crazy theories about language and life but ultimately revealing a truth.