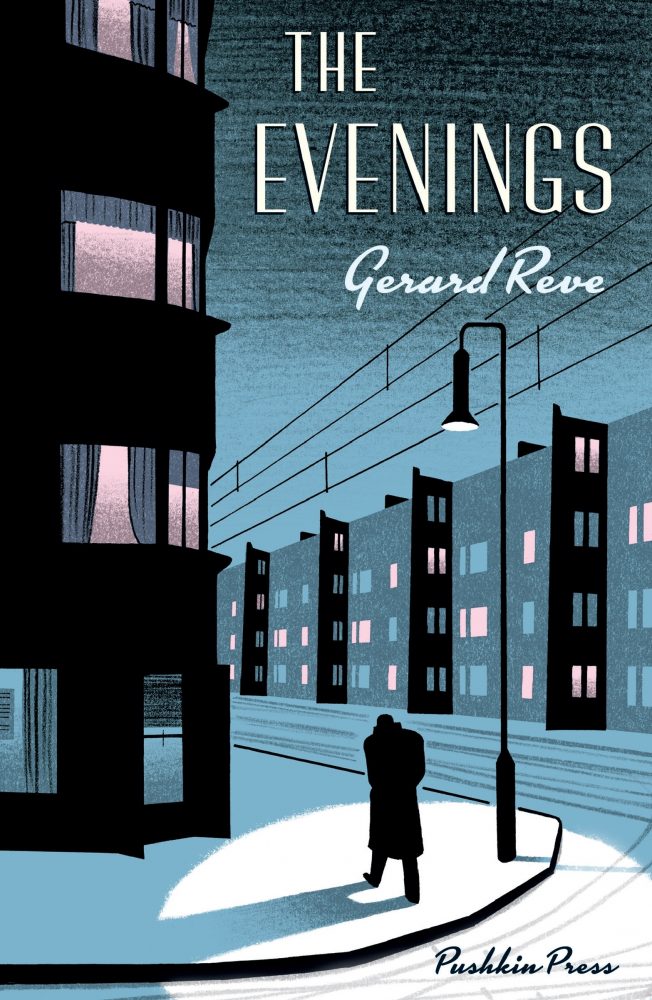 Every man has his story, but it’s seldom an important one. (The Evenings)

How do you write a novel where little happens? How do you write a review of a novel where little happens and where the characters are bored, boring and unsympathetic? And then there’s the challenge of writing a review of what’s regarded as the most famous Dutch novel of the twentieth century. A sacred cow of a novel taught in Dutch schools and only today translated into English, seventy years after its Dutch debut.

To write such an hypnotic, seductive novel about existential youthful ennui and banal domesticity requires a writer with the combined skills of Kafka, Salinger, Beckett, Camus and Sartre. Gerard Reve is that writer, and to make this excruciatingly exquisite novel even more powerful I need to tell you that it was his first novel and that he was only 24 when he published it. Reve was born in 1923, lived through the Second World War and the Nazi Occupation in the Netherlands and emerged in 1947 to write The Evenings. He went on to become a major literary and public figure, notorious for his open homosexuality (illegal then), for his radical opinions on religion and for his depiction of violence. The Evenings is a beach book by comparison with what he wrote later.

The protagonist, and first-person narrator, is the mild-mannered 23-year-old Frits Egters, who works in an office by day.

I take cards out of a file. Once I have taken them out, I put them back in again. That’s it.

Frits lives by the clock with his predictable, boring parents, visits his bizarre friends and older brother and tries to get through one wasted day after another before falling asleep and having nightmares about violence, dead children and weird animals. After he returns from work, he desperately seeks to fill his ‘evenings’ with activity (walks, smoking, cinema) and to fill any silence with wild stories or minute observations. If he doesn’t say something true or meaningful he believes something terrible will happen. Both his stream-of-consciousness inner monologues and his conversations with others are related word-for-word, with no line-breaks between third and first person, and are told with equal relevance (or irrelevance), whether he is watching his mother boil eggs or his father mashing his food into his gravy; whether they are discussing the weather or listening to the radio; whether he is scrutinizing himself in the mirror or counting the hairs on his brother’s head. You can hear the clocks ticking in The Evenings and see the dropped stitches in Mrs Egters’ knitting.
I’m waiting for them to hang themselves or beat each other to death or set the house on fire, Frits says about his bickering and soup-slurping parents.

He fires off his odd ideas to his friends on alcohol, healthy living, woodlice, baldness and cancer – a stupendous disease. Grand. Readers of Reve often comment on how entertaining and sometimes funny The Evenings is; for me the book created a mood of claustrophobia and depression. And so our hours pass, Frits thought. His ideas are often nonsense; he can be cruel and judgemental. He is not suicidal – in spite of his nihilism – but he doesn’t actively attempt to change his life. Is this Reve conjuring up the ennui of the deflated post-war generation of young Dutch men? The war is barely mentioned but the fact that it is 1947 must be significant. What meaning did life hold for Frits and Reve?

This is an extraordinary novel about ten December evenings of emptiness and self-examination in the life of one ordinary young man. As there is no plot you pay more attention to the seductive and compelling rhythm of the language, to the even tone, the discreet repetition and un-showy style, rendered so beautifully in English – an English of the time, of the 1940s, but so readable for us too – by one of the world’s top translators from Dutch, Sam Garrett. Don’t expect neat solutions or fast-paced twists in this novel. It finishes without flourish or celebration on New Year’s Eve, without wine but with “berry juice”. Perhaps this is Frits’s epiphany, his main achievement, that he has made it through these ten ‘evenings’ to the end of the year:

The Year is no more, I am alive, I breathe, and I move, so I live… whatever ordeals are yet to come, I am alive.

This is not a book to like or dislike but to exist within; a place to catch a glimpse of naked humanity. Reading it for me was like travelling in a slow train, passing by grey landscapes and uniform housing, confronting occasional rain-showers, sudden thunderstorms, a flash of sunlight, and arriving a little wiser but sadder after an unforgettable journey.