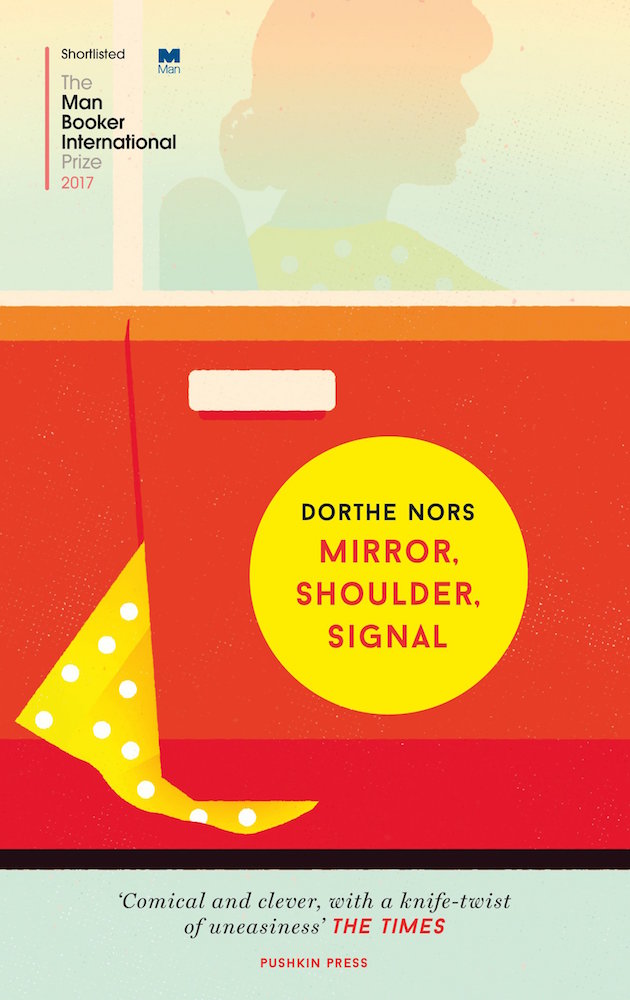 Sonja Hansen is forty-something, unhappy, single, a Danish translator of Swedish crime novels, living in bustling, modern Copenhagen, originally from remote, rural West Jutland. She decides to learn to drive, in order to shift the gears of her life, but it’s a challenge because Sonja suffers from positional vertigo. This means she often faints, can’t look down, to the side or back. She is in a rut – a real, emotional, practical and existential rut. Thank goodness Dorthe Nors came along to help Sonja out.

If, like me, you’ve read Dorthe Nors’ short stories before (Minna Needs Rehearsal Space and Karate Chop) you know what to expect and know the rules of reading Dorthe Nors: you sit on the rollercoaster and let her drive. You give in to the pure pleasure of reading, the exuberance of the language, the myriads of colourful characters and, in this novel (her first novel in English), the deliberate metaphors: In Mirror, Shoulder, Signal driving is central to the narrative. Sonja’s at a turning point, driving is a game with death, she has no sense of direction, can’t look in the mirror, so will she ever move on in life? Dorthe Nors is obviously having fun with all this – she is a mistress of comedy and satire – but she is also a very kind and astute writer: Sonja’s story is heartbreaking. Here’s a troubled, lonely woman in the city dreaming of the rye fields and endless skies of her childhood (the descriptions of nature are outstanding), whilst trying to behave like an adult, a child who doesn’t want to learn her lesson, who won’t adapt.

For the whole of Mirror, Shoulder, Signal, Dorthe Nors places herself (and all of us) inside Sonja’s brain, her busy, buzzing, snow-globe brain. We experience the same dislocation, fear and vertigo. We wonder if she is going mad. We celebrate her mini triumphs (changing from third to fourth gear!). Sometimes Sonja is making sharp, witty observations – of her driving instructor Jytte (a bingo night wreck) or of her new-age masseuse Ellen (with warm hands and a certain predilection for surrogate worlds) and at times she is shrewdly analyzing her own oddness: that’s the problem: the things Sonja says and the way she says them.

The doctor had described Sonja’s medical condition of ‘positional vertigo’ (a family trait shared by her mother and grandmother) as just some tiny stones inside of you that are breaking free. Sonja explains that: When she gets her head back into place the world rights itself. The world’s where it should be, but it’s been shaken. Her understanding of herself may be child-like but it is deeply moving: I’m like my Mum, we’ve got these rich expansive inner worlds. We’re quite intelligent. But as women, we’re not completely fine-tuned.

Through clever control Dorthe Nors constantly applies the brakes on the metaphysics and metaphors and drops us off in the real world to confront real events: we walk – and drive! – the named streets of Copenhagen; visit wine bars with Sonja and Molly, her psychologist friend; sit in the car with her mouthy, vulgar instructor; laugh out loud over the smug women-only meditation group she joins, and we root for her as she attempts to reconcile with her only sibling, Kate, once “a barn dance femme-fatale” and now a super-Mum. There’s some delightful teasing of the current Scandi noir crime-reading craze when Sonja talks about her job as translator (and may I slip in here and thank Dorthe Nors’ English translator Misha Hoekstra?): she translates a famous and particularly violent and blood-thirsty Swedish crime writer: All politicians and her sister Kate do is read crime novels…in the belief that (he) throws light on society from below.

What does Sonja want ultimately? She wants to take control, to make her own decisions and not be bullied by those around her. The ending of Mirror, Shoulder, Signal is sad, but lovely, a tiny triumph, summed up for me by these sublime sentences:
She wants to get free, utterly free, and so she has to take flight….Sonja pressed an elevator button in her mind. The doors opened, then Sonja stepped in and departed skyward.

Translated from Danish by Misha Hoekstra