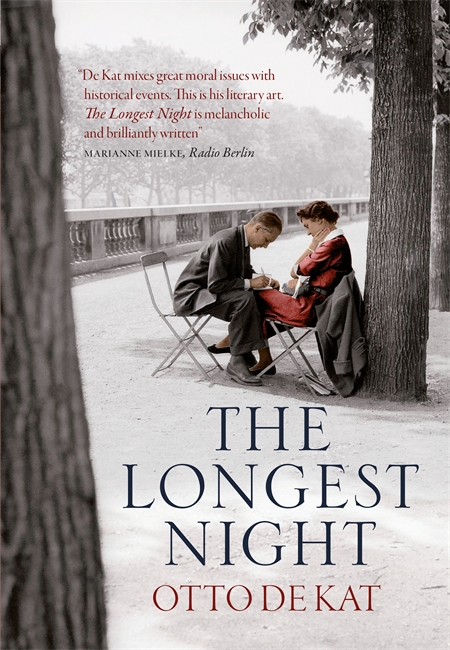 In 2014, Otto de Kat wrote a short essay for PEN, where he gives a poetic yet also practical definition of the art and skill of writing historical fiction, of crafting novels whose life must be fictional, and yet be feistily rooted in factual reality. This genre has been his own home since 1998, when he published his first novel, The Figure in the Distance. Memory, history, the individual and its place in a world in dramatic flux are his constant themes, as are the relationship and parallels between Dutch and German history: Holland and Germany as nations with a specific cultural and political identity and past, before and after World War II. In each novel, de Kat creates worlds of relentless solidity but also worlds of perpetual evasion and abstraction – and the two are vitally interconnected, as though each were the key to the secret of the whole.

De Kat’s books, and especially his latest to be translated into English, The Longest Night, are tireless attempts to solve the puzzle of human remembrance: its tenacity, selectivity, its inalienable grip on human experience and consciousness, its flickering fragility, its deluding or revelatory powers. Private, public or historical, memory is at the centre of each life, the life-thread of humanity itself. There is a constant struggle between memory and forgetting, between the fullness afforded by recollection, by the vital community created by these retrieved moments and sentiments of being, and the unbearable stripping down of emotion when memory represents the re-enactment and unalloyed re-experiencing of loss, of trauma, of devastation, or simply, brutally, of the severance of stories, of the removal even of an end to be remembered.

What are the rules of engagement with the past? This seems to be the critical dilemma of every life, and the lives of individual women or men constitute in de Kat’s world the prism of perception, the scale of value and of existential and moral significance. The silent echo to this is the craving for a release from remembrance, for total escape once it is all over – for a ‘palliative sedative treatment’ to everything that renders life all that it is.

In The Longest Night an old woman, Emma, who has been a child and a young woman along de Kat’s narrative trail, is given to us in the frail rawness of her last hours – as chosen by her, as determined by a team of specialists in assisted dying, who are silently at work. Words were the enemy, silence their best camouflage. On a very fundamental level, this brief volume is about how we die, our relationship with our own mortality – and the mortality of those dear to us and close to us.

This art of dying, the necessary, other side of the art of living, is at the centre of de Kat’s novel, which could be defined as the quiet afterthoughts of many stormy lives. Several stories intertwine, life experiences clash, blend or complement one another with an expectation of ultimate catharsis and revelation. Several roads to the end of a life are picked up and scrutinised under an almost blinding, isolating light, as past and present flicker alternately, as in an old-fashioned, phantasmagorical magic lantern. Euthanasia and palliative assisted dying, suicide and self-destruction, natural death versus brutal execution and murder, lonely death; ghosts and real lives commingle, to confirm that it is death that awakens us to life. It is a search for a purpose in a life now expended, in order to exorcise traumas or ourselves.

Writers are catchers of the past; writing is an attempt to get a grip on the things that were, and another word for melancholy; writing is a fight against forgetting, de Kat wrote in his PEN essay, and the past he seeks to catch here is the Kreisau Circle, the Claus von Stauffenberg plot, the untold story of German resistance to Hitler and Nazism, as evinced through the particular stories of Adam von Trott and his wife Clarita, more indirectly the Anglo-Irish writer Christabel Bielenberg, who provides a hazy mirror image of Emma as the foreign wife to a German state official, and of Peter Bielenberg, who survived the war, the Stauffenberg plot, and the faint attempts at denazification by the allies, to become a happy Irish farmer.

There is a constant converging of stories of bravery, violence, war and devastation, love, peace, forbearance, the rickety dream of a reconstructed life, as well as a sense that right and wrong were not always clear, as though an entangled ethics were the only secure reality: this was how to walk and to live and to love and to outwit death… free and with no history.

De Kat does not offer closure in any distinct or even abstract form, nor a hermetic context of judgment or even sympathy. What he does provide us with is a tantalisingly inconclusive, rich narrative, where the burden not only of interpretation but ultimately of a cohering conscience lies exclusively, so it would seem, with the reader.