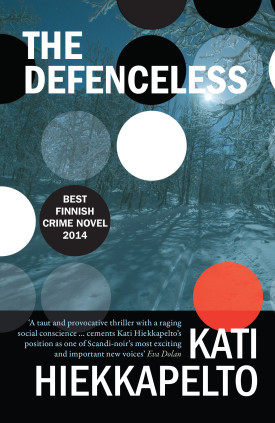 The Defenceless by Kati Hiekkapelto

Translated from the Finnish by David Hackston

Kati Hiekkapelto is the latest in an increasingly long line of “Scandi-noir” thriller writers to arrive on British bookshelves. The Defenceless, which won the 2014 Best Finnish Crime Novel award, is the second in a series (The Hummingbird was the first and Hiekkapelto is currently working on the third) that features her hero – or, as so often in the genre, probably better described as anti-hero – Anna Fekete. Fekete is a Yugoslav-Hungarian, who was brought up in Finland, and works as a police officer in a northern seaside city, which in many ways seems as faceless as it is unidentified.

Fekete has problems: an alcoholic brother; a much older colleague, Esko, with racist, anti-immigrant views, health issues and a flip-flop desire to get out of the police and assuage his conscience by going to work in a refugee camp. And that’s without her own troubles: no social life to speak of (because her police-work precludes one), a tendency to binge-drink when she feels low, and, last but not least, an unwanted pregnancy by an un-named man (she isn’t sure which) that co-incides with the death of her beloved grandmother back in what is now Serbia.

This is the background to a drugs and gangs tale, in which murder is the headline, but the social tensions surrounding refugees and immigration are the driving forces – bang up-to-date, then. A Danish mob is trying to infiltrate the Finnish drugs scene, which is run by the local Hell’s Angels. A young and desperate Pakistani Christian, Sammy, is dragged into crime, in his attempts to avoid deportation. Fekete is called out to investigate the murder of an old man, seemingly unconnected to her colleague Esko’s attempts to stop the Danes taking over the drugs trade. It isn’t unconnected – of course – but there are red herrings galore as the complex of sub-plots weaves towards the denouement – don’t worry I’m giving little away but among the sub-plots are a Hungarian au pair, who may be more, or less, than she seems and a second murder, though the body is apparently missing. Along the way, there are fascinating disquisitions on the tedium of life in Finland, the shortcomings of the education system and the solace of ski-ing across frozen lakes. Ultimately, these can become bothersome interruptions in the narrative. And some of the dialogue seems oddly stilted: the scene where the murderer finally confesses just doesn’t work – for me – and I found the sequence where the drugs mob meets its Waterloo just too pat to be believable.

There is a curious disconnection between the people in the story: perhaps this is just a reflection of what it is to be Finnish? Their isolation, their anger with themselves and the world they live in offers a depressing view of Finnish society…bleak people living in a bleak landscape. Fekete’s deep sympathy for the plight of Sammy, the on-the-run refugee, comes to naught as the system tosses him onto the scrap-heap…a sense of powerlessness permeates here, as she contemplates her own life and her lack of fulfilment.

The lives of Hiekkapelto’s characters are drawn starkly and sometimes all too briefly: a little less of the philosophising and sermonising and a little more probing into motivation would bring some greater credibility to the action. All that said, this is by no means a bad read – just, in places, a rather uncomfortable one, because it doesn’t quite come together the way I’ve come to expect of Nordic crime writing. For me Kati Hiekkapelto isn’t yet about to knock Jo Nesbo or Henning Mankell off their perches.