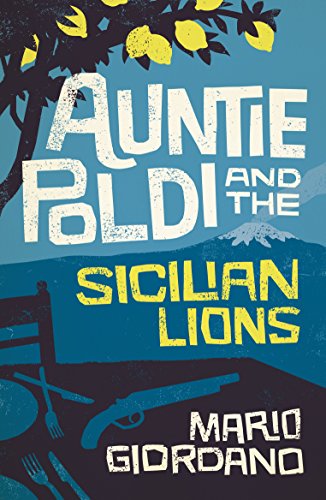 Sicily – as anyone who has read (or watched) the exploits of Inspector Montalbano will well know – is a land obsessed with its wine and food, populated by charming, eccentric and obfuscatory villains and semi-villains, dedicated to eradicating anything that has the merest whiff of political correctness – especially where women are concerned. And of course they live in the permanent shadow of the Cosa Nostra, though this book goes out of its way to point out that many Sicilians believe the Mafia to be an invention of ‘those Northern fascists’. Into this seething jacuzzi steps the narrator’s Auntie Poldi, dedicated, in her case, to drinking herself to death between the twin belvederi of the sunlit sea and Mount Etna, following the death of her beloved Peppe. Given that this book is to be “the first in a charming… series”, we can guess that she will fail in this attempt, at least for the time being, and that it’s not her corpse that will meet a mysterious end. And, as we hear time and again, she knows a thing or two about pretty well everything!

Auntie Poldi – like her author – is a German-Italian, originally from Munich. Her real name is Isolde Oberreiter. A 60-year old who swears in Bavarian and uses German invectives as just one of many weapons (including her late policeman-father’s collection of historic guns) against those who stand in her way as she investigates the death of her young, and handsome, Sicilian handy man. No, she hasn’t ‘had’ him, though she has fantasised about it, just as she fantasises in her eternal search for her Tristan amongst the dozens of police officers – especially vigili urbani – whom she photographs on her travels – five albums’ worth!

She is the leading eccentric in a whole cast of them, who wouldn’t be out of place in a Wodehouse novel set in a Mediterranean Blandings: a text-book French girl with an aggressive goose for a companion and who prefaces almost everything she says with Mon Dieu, an elderly nobleman who raves about the poet Hölderlin (with a Doberman to match), a know-all uncle and a more than personable Chief Inspector:

aquiline nose… face like a Greek god cast in bronze… a face devoid of fatigue… hands like a pianist’s, slender but strong, with the curving thumbs indicative of willpower. Poldi was something of an expert on these things.

This is Vito Montana, with whom the indomitable Isolde forms an unlikely alliance – romantic as well as professional – an alliance, however, that is somewhat one-sided, as she ignores his every warning to stay out of the detection business. She, of course, solves the riddle, not without a deal of rancour on his part and a deal of threats against her life on hers. Is it the Mafia? Ah, that would be telling…but along the way, as in all the best stories, we learn about being Sicilian: the importance of the bella figura:

any Italian male, especially a Sicilian [can endure] economic crises, volcanic eruptions, corrupt politicians…uncollected rubbish with fatalism and a bella figura – the basic equipment includes…an unostentatiously fashionable appearance, a good pair of shoes and the right make of sunglasses. Above all… always looking good, never foolish.

Auntie Poldi’s problem is that she transgresses the code:

a German woman meddles in my enquiries and makes me look stupid… I’m almost tempted… to let those idiots in the Carabinieri bust a gut instead.

And so food, the Sicilian panacea, must come to the rescue: Poldi has to abandon roast pork, Bavarian style, and learn to cook alla Siciliana. She tempts her Chief Inspector with Pasta alla Norma (…the sweetness of the tomato sauce blends with the salty ricotta and the slightly bitter note of the grilled aubergines.) followed by a gelato sweet as a whispered promise… a little tart like a lover’s goodbye the next morning. Ah me, if only…

This is the charm of this book: prose – beautifully translated by John Brownjohn, from the German, by the way, not Italian – which glides across the page like a Rolls Royce on the Mediterranean Corniche, liberally interspersed with Wodehousian (yes, him again) similes – We were welcomed with tumblerfuls of a dry Martini strong enough to send a Finnish seaman into a coma – and wry comments on Sicily – the relationship between physical stature and criminality in the male population… the shorter the man, the more threatening and the more likely to be a Mafioso.

There are enough surprises, twists and turns, to satisfy the most demanding addict of criminalità, but the true delight is its laid-back eccentricity, raffish humour and just the right attention to detail. Oberreiter and Montana may not roll off the tongue like Starsky and Hutch or Holmes and Watson, but they look set to create their own very special relationship. Roll on volume two…

Auntie Poldi and the Sicilian Lions

Translated from the German by John Brownjohn