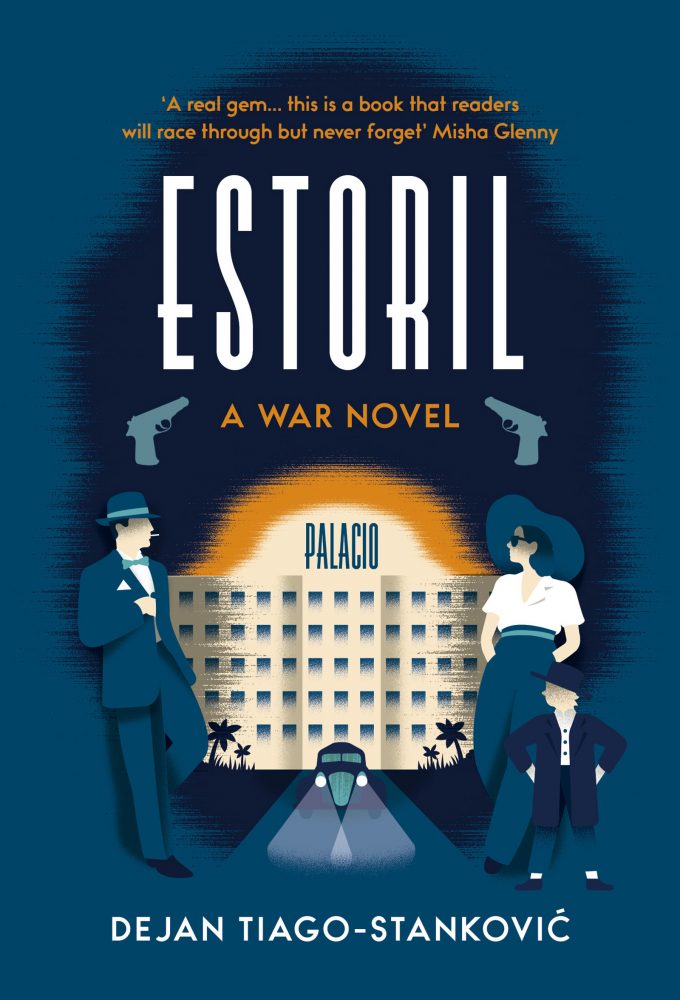 Set during World War II, Dejan Tiago-Stankovic’s delightful, sprawling novel, Estoril, gives us a slice of history played out on Portugal’s “neutral” soil. Built in 1930 on the Lisbon Rivera, the Palácio Estoril Hotel is still in existence today. During the war it was inhabited by wealthy refugees, spies and double agents. Writers such as Antoine de Saint-Exupéry passed through, as did European royalty.

It is a tumultuous period and Tiago-Stankovic’s two central characters, who form an unlikely friendship, could not be more different. One is based on a real person, the other is fictional. Dušan “Duško” Popov was a Serbian double agent who met Ian Fleming in the hotel casino and subsequently served as a model for James Bond. He plays off the German and British secret service against each other and doesn’t mind asking his friends for extravagant loans which he rarely pays back. Tiago-Stankovic depicts him as a womanising and debauched character, who unwittingly becomes a hero – after the war he was awarded an OBE.

Gavriel Franklin (Gaby) is a ten-year-old Hasidic Jew who arrives alone at the hotel in 1940. He carries with him a suitcase full of various currencies and has cut diamonds sewn into the hem of his rekel. He assures the American hotel manager, Mr Black, that his mother and father have promised to join him there. Despite the Consul General in Bordeaux, Dr Aristides de Sousa Mendes, granting them visas, they had been denied entry into Spain:

The border crossing was closed. At Lisbon’s request, the Spanish authorities had stopped accepting visas issued by Mendes.

Gaby was smuggled into Spain without his parents. His Swiss rescuer drove him to Lisbon, booked him in to the Palácio and put him on a train to Estoril. In a clever metafictional twist, Tiago-Stankovic suggests that the fictional Gaby, and his fox-coloured pet dog, Fennec, may have been the inspiration for Saint-Exupery’s The Little Prince. The reverse is true.

Estoril features an array of invented characters mixed in with historical figures. For those who have fled brutality, the Palácio Estoril provides a safe refuge as they anxiously wait for papers from a safe country willing to accept them. For others, the hotel is merely a luxury haven from war. The former King of Romania, Carol II, and his mistress, Magda Lupescu, pass through. Carol absconded for rather different reasons, accused of having embezzled state funds and illegally appropriated state goods. Despite his anti-semitic leaning, Carol is enthralled by Gaby.

War in all its many contradictions comes under Tiago-Stankovic’s scrutiny and he does not hold back from mocking the British and the Portuguese as well as his fellow countrymen. Ian Fleming is described as a drunk and a gambler, forever creating problems. Inspector Cardoso, a small man in a cheap suit and smelling of cologne water, is head of the Estoril political police. He keeps a keen eye on the Lisbon Riviera to ensure the neutrality of the state is never compromised or threatened. When the war ends, he instructs Black, in no uncertain terms, to ensure the hotel’s national flag is lowered to half-mast after Hitler’s suicide, claiming:

We preserved peace and dignity and maintained our neutrality all through the war. It wouldn’t be nice if at the last moment we ran over to the winning side. You must admit, it wouldn’t speak well of us, would it.

The novel’s lighter moments possess an anecdotal quality such as when former Polish Prime Minister, Jan Paderewski, agrees to give a concert at the hotel – he is a world famous pianist. He plays two pieces and, owing to his dementia and old age, believes he has played an entire recital. The audience is indignant:

Au revoir? Is that it? It’s over? It really did look like the end, but except for the pianist, nobody moved. They were not yet ready for it to be over. They had had only about ten minutes of live performance and, counting the three interruptions of bowing and applause it had been less than twenty minutes since the concert began.

The tickets, in aid of saving Poland, had been extremely expensive. Cordoso steps in and commandeers a Bulgarian violinist to fill in and pretend to be Paderewski’s student:

As he was neither a Pole nor a pianist he could hardly have been a pupil of the demented maestro.” Luckily the musician and four other string players receive rapturous applause and “To everyone’s great surprise, the encore saw Mr Paderewski come back out on stage again.

Crisply translated by Christina Pribichevich-Zoric, this is a fascinating portrait of a time when Europeans on opposing sides could sit next to one another in the casino, bar or restaurant, despite the conflicts raging outside. Duško dances around them all: immoral, shadowy, charismatic, dangerous. Reckless with women and contemptuous of authority, he appears to have little care for the havoc he causes by double dealing in love and espionage.

Tiago-Stankovic also give us glimpses of life for the hotel staff who are often called upon to keep the peace. We’re reminded of the authoritarian regime of António de Oliveira Salazar when Black’s loyal driver Bruno is hauled off for questioning, solitary confinement and torture because he is exposed as a member of the Comintern (an international communist organisation).

But it is Gaby and Duško who really drive Estoril. The one person to retain his dignity throughout is Gaby; loved by the staff and guests alike. His endless questions suggest the insatiable curiosity of a fledging writer. His patient wait for his parents, whom most suspect will never join him, is unbearably poignant and his refusal to give up hope stays with you long after the final page.

Translated from Serbo-Croatian by Christina Pribichevich-Zoric

Published by Head of Zeus

Lucy Popescu has a particular interest in literary fiction in translation and has served on the Spanish New Books Panel and The Saif Ghobash Banipal Prize for Arabic Literary Translation. She reviews books for various publications including The Financial Times, TLS and New Humanist. Her anthology, A Country to Call Home, focusing on the experiences of young refugees will be published in June 2018. Her other publications include A Country of Refuge, The Good Tourist and Another Sky. She is the chair of the Authors’ Club Best First Novel Award.