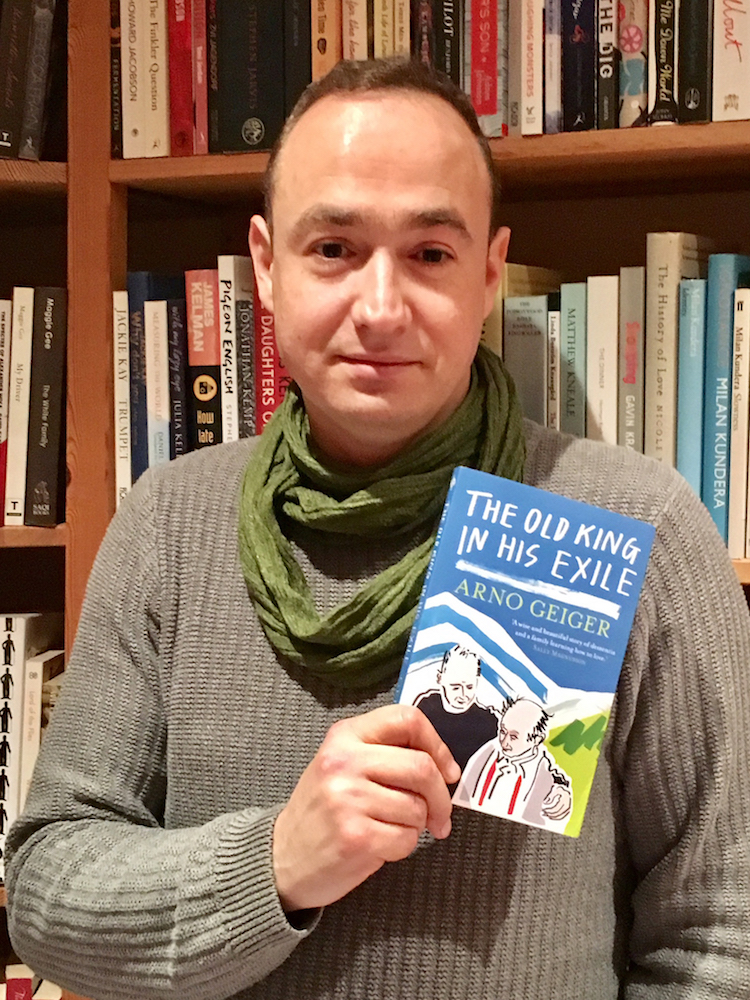 #‎RivetingReviews: Jonathan Ruppin reviews THE OLD KING IN HIS EXILE by Arno Geiger

Dementia now tops heart disease as the leading cause of death in several European nations, including in the UK. It has robbed us of Iris Murdoch and Terry Pratchett, its traces faintly detectable in their final works. Looming like a vampire over our old age, the threat of our very essence being slowly leached from us has become a recurrent theme in contemporary fiction, from Emma Healey‘s Elizabeth is Missing to The Story of Forgetting by Stefan Merrill Block and Samantha Harvey‘s The Wilderness.

Arno Geiger, winner of the inaugural German Book Prize in 2005, is another novelist to have tackled the subject, but he has done so in a plangent memoir, recording the gradual decline of his own father, August. While his account is woven from the threads of loss and frustration, it is shot through with affection, wisdom and – quite often – humour, albeit wry and absurd, when his father is aware of his certainties slipping away.

Arno’s first response to detecting his father’s condition is self-recrimination, at the anger he felt believing that his father “was making my life difficult on purpose”, at having failed to see the signs. Divorce from a much younger wife had begun his father’s turning-in-upon-himself. His lack of acknowledgment of the outside world seemed only ‘natural’ for a naturally taciturn man.

A profound loss was already taking place. August’s time as a Russian prisoner-of-war left him averse to leaving the Alpine valley of his home, so his inability to recognize the house he had built himself, and his constant pleas to be taken home, bring as much sorrow to Arno as they do bewilderment to his father.

In the background is a knowing parallel with changing times. Once the Geiger family were practical and self-sufficient, stoical and frugal under the Anschluss, the children working in the fields after school. Now August’s children take turns with carers to watch over him. They coax him from bed in the morning and comfort him at night; they decipher his concerns and soothe his obsessions.

August’s condition does, however, allow a new bond of intimacy; lucid days allow father and son to unite in facing down Alzheimer’s obdurate erosion. It is a relationship re-forged on new terms: “As my father can no longer cross the bridge into my world, I have to go over to him.” It is only August’s inner composure, built on the resilience that carried him through harder times, that creates a territory where they can now commune.

For Arno, the belated hints of his father’s life before Arno was born are tantalising – featuring both barely describable horror as well as bucolic contentment. Each glimpse carries with it a reminder that much more of it is now passing into obscurity. A lost photograph of his father on his return from the Russian Front offers aching poignancy.

The Old King in His Exile

Translated from German by Stefan Tobler

Jonathan Ruppin is the founder of the English PEN Translated Literature Book Club. He has worked in several roles across the book trade since 1995, including 12 years at Foyles Bookshop in London. He has been a judge on numerous literary awards and has interviewed over a hundred authors, both in print and on stage.