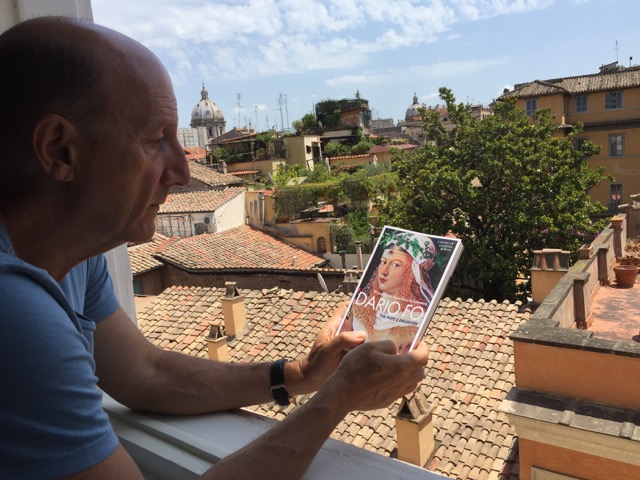 All tours lead to Rome. In 2015, over 13 million people visited the Eternal City. 7 million visited Vaticanland, where every Wednesday the Pope drives out in his Pope-mobile among the masses in St. Peter’s Square like Mickey Mouse at the entrance to the Magical Kingdom. History sells. So does gossip. And sometimes it’s difficult to tell one from the other.

From the window of my apartment in Rome, I show friends the Church of Sant’Andrea della Valle, where Tosca met her lover Cavadarossi. I point out Piazza Venezia where Audrey Hepburn rode on the back of a Vespa with Gregory Peck. And if they are really curious, I take them around the corner to the Spanish Church of Monserrato to the tomb of Alexander VI, otherwise known as Jeremy Irons or The Borgia Pope, who just over five centuries ago presided over a Vatican of intrigue and corruption, and reportedly slept with his daughter Lucrezia.

Tosca, Roman Holiday, and The Borgias are, of course, fictional fantasies. But sometimes fiction is the fastest way to the truth.  This has been the modus operandi of the Italian Nobel Laureate Dario Fo over a long career of writing plays and essays. His most famous drama The Accidental Death of an Anarchist, which opened in the West End in 1980, was not a work of investigative journalism into the mysterious death of the Italian anarchist Giuseppe Pinelli who was either tossed or fell accidentally from the window of a police station in Milan in 1969. Instead, Fo’s farce threw into question all the official stories, and above all our ability to recount them with any degree of truth.

The Pope’s Daughter raises just such questions to the received history of the Borgia family. For the first time, at the age of 90, Dario Fo has tried his hand at a novel. Unlike more recent gossip about Silvio Berlusconi’s mafia connections, or his adventures in underage wonderland, the charges that Lucrezia had an incestuous relationship with both her father and her brother Cesare, are the products of centuries of innuendo rather than scholarship. What Dario Fo does, in a work that mixes dramatized scenes from Lucrezia’s intrepid life, commentary on previous histories of her life, and on Fo’s own neo-Renaissance portraits of political actors including her father and brother, her final father-in-law, Ercole d’Este the Duke of Ferrara, who put the poor girl to many tests, is to paint a portrait of a Superwoman.

Dario Fo’s Lucrezia is smarter, wittier, prettier and filled with more passion and compassion than any of the men in her life, from the Pope down to her several husbands and lovers, including the poet Pietro Bembo and her brother-in-law Francesco Gonzaga. In other words, she is no more real than the conniving vixen of legend. The Pope’s Daughter is as much a piece of agit-prop as Fo’s most entertaining plays.

And yet one might ask why Fo wants to agitate his public with propaganda about a woman five centuries dead? Is it to counter the historical slander that has followed successful, beautiful women? Fo’s own wife and long-time collaborator, the actress Franca Rame, was famously abducted off the streets of Milan, beaten, gang-raped, and left bleeding in a public park by a gang of Fascists with ties to the police, intent on silencing the political couple by smearing their reputation. Is it to shore up history against the flood of misinformation that the internet, with its easy cut-and-paste, and a modern public with its easy acceptance of story, propagates like a virus? Or is it simply, as I think every time I gaze out my window, that the past isn’t even past?

The publisher Europa Editions has done a service both to fans of Dario Fo and to fans of the TV series on the Borgias (and Pope Jeremy Irons) by translating the novel in to English – albeit into the English of Antony Shugaar, that sounds like he has been living out of the language too long. It makes a useful companion for a visitor’s next tour to Rome, or for a visit to the local confessional. Jonathan Levi is the author of the novels A Guide for the Perplexed and Septimania, which will be published by Duckworth on August 11, 2016