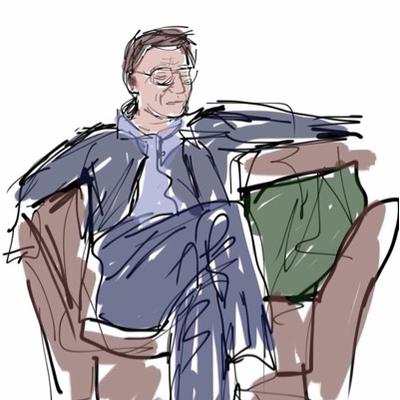 Last year I spent a month at Hawthornden International Writers’ Retreat near Edinburgh. Fellows (as the participants are called) come from all round the world, half a dozen at a time, to spend four weeks writing in an internetless castle. It can be quite an intense experience, and you have no idea who else is going to be there, where they come from or what genre they are writing in. I was thrilled to discover that one of my fellow Fellows was an eminent Icelandic poet, as I have been fascinated by Norse culture since I was a boy, writing my first play and many subsequent poems about the myths. My father was stationed in Akureyri during the Second World War, an experience which haunted him; I made a pilgrimage there after he died and wrote a book about it, a copy of which I gave to Gerður Kristný during the month in Scotland. She in turn showed me her 2012 volume from Arc Publications, Bloodhoof, a retelling of one of the Poetic Edda, Skírnismál, in a radical new light, very much from the feminist perspective. Some years previously she had been invited to perform the poem to 50,000 Icelandic women to mark the so-called ‘Women’s Holiday’, an indication of her reputation in her home country, where she regularly appears on television and has been publicly quoted by the president.

Bloodhof was translated by Rory McTurk and I remember being struck by his version’s precision and lyricism (qualities that all too rarely coincide). McTurk is again the translator in this latest book by the prolific Kristný (whether one should use the first or last name was never quite resolved, even at Hawthornden), which turns to a more modern story, a true one this time, as dark as anything in the Edda. Drápa is about the murder of Gréta Birgisdóttir by her husband Bragi Ólafsson in 1988, a case on which Gerður Kristný reported when she was a journalist, interviewing Bragi after his release from prison (talking to him at the actual scene of the crime). Her interest in such cases, and the success of her study of sexual abuse, Portrait of Daddy, would make an article in itself, but much of the detail is summarised in this new book’s introduction. Indeed, Gerður Kristný’s actual poem (a kind of murder ballad, subtitled ‘The Slaying’) is only part of the pleasure here: Drápa is a handsome volume, anything but academic in appearance, with spidery line drawings that scuttle unexpectedly across the page and a dramatic title in bold red. Yet it is authoritatively prepared and provides plenty of context. The introduction by the University of Iceland’s Guðni Elísson and Alda Björk Valdimarsdóttir is exemplary, a helpful examination of the poet’s ‘dark vision’, relating it to Goethe and Nietzsche, but also keeping in mind the needs of the general reader who may not know much about Icelandic culture. There is even a guide to pronunciation, and it’s well worth trying to read some of the original verses aloud.

Those verses are set out attractively, with few words to the page – the wastes of white space feel somehow appropriate – so that one can flit from English to Icelandic and back, Gerður Kristný’s stylistic ‘minimalism’ making it is easy to track how the translation operates. Page 37, for example, has just eleven words in the top left corner:

In the diametrically opposite corner is Rory McTurk’s version (using only three more words than the Icelandic):

Unexceptional perhaps, but McTurk makes of the lines something that the Imagists would have recognized. Ezra Pound was drawn to Anglo-Saxon poems such as ‘The Seafarer’, with its similarly economical riddle-based style, and even with little or no knowledge of Icelandic (I do have some Old Norse) one can see how Gerður Kristný searches for the essence of meaning, drawing on traditional alliteration and other musical effects. Of course, as with snowflakes, the effect is cumulative: this is a narrative poem, even though the conventions may feel unfamiliar. Just as when reading the sagas one needs to accept that story-telling is different in Iceland: brisker, skipping irrelevancies, cutting to the chase. Again, that suits the Imagist approach, and the result is not unlike the long poems of H.D. or Richard Aldington.

The best way to approach this book is to turn straight to page 29, where the poem begins, then read the supporting material later. It is a chilly and chilling first page, with that Imagist technique clearly demonstrated as stars are described falling: ‘their fragments point / like knife-tips upwards / through new-fallen snow’. It’s soon evident that this is not going to be a naturalistic murder case. In fact, readers may feel that they are in territory familiar from certain psychically driven Scandi-noir series. We seem to be behind the poet’s hand-held camera as ‘night falls / with the whistling sound // of an axe’, and very soon are running with the narrator ‘in canine form’. It’s rather wonderful to be in the company of a poet who can draw on such material, for whom the story of Fenrir, say, is just one of the available myths (though belief in the Black Dog of the Fens, Old Shuck, lingers on in England): there is nothing cartoonish here, though; it’s as bleak as Ted Hughes’s Crow. This is the essence of something darkly believable, and is witnessed by the poet-journalist herself. It is also highly enjoyable weather verse: ‘The winter never / takes prisoners // It leads people / round the next corner / into a storm of bullets’ – although the translation doesn’t capture the onomatopaeia of ‘þar sem skothríðin bíður’.

Gerður Kristný has a real gift for the (often cinematic) macabre, and part of the pleasure in Drápa is that of reading a horror story. The introduction of the ‘darcus’ contributes to this Gothic atmosphere: film directors have long known how sinister clowns can be, and here they are described as evil emissaries enacting the satanic narrator’s crime, stuffing the victim into a coffin where ‘Lyktin / af viði og voða / lamaði’ – ‘the smell / of wood and peril / was paralysing’, Rory McTurk managing here to reproduce something of the Icelandic word-music in ‘peril / paral’. The original perpetrator, Bragi (wasn’t Bragi the Norse god of poetry?), had been a boxer, and Gerður Kristný uses this in her poem to heighten its allegorical power, conscious that (as the introduction tells us) a popular motif in certain ‘fantastic literature’ describes ‘the Devil’ visiting a community ‘in the guise of a travelling show or circus’. Like the medieval morality plays it harks back to (again the link with Dr Faustus), the poem is not afraid to shock us : ‘I weigh the lungs / in the palms of my hands / inflate them by blowing // then listen to the air / making its escape’, a scene which not only conjures the viking ‘blood eagle’ ritual, but could be a detail in a painting by Bosch. And just as the narrator in Robert Browning’s ‘Porphyria’s Lover’ smiles to himself at the thought that ‘God has not said a word’, so here the murderer notes

Alas, there is no way to make English sound as interesting as the Icelandic original (which includes incomparable words like ‘tungleygur’). If one didn’t know that this poem was product of a country where the sun barely rises for some months of the year, then one might have guessed it. Yet there is such an energy in Gerður Kristný’s writing, in the word play and the lively scoring, the fugal interplay of techniques, that one emerges – as from a hot spring – shaken, somewhat overwhelmed by the sulphurous fumes, but invigorated.

Translated from the Icelandic by Rory McTurk

John Greening’s recent books include To the War Poets (Carcanet), Heath (Nine Arches, with Penelope Shuttle) and an edition of Geoffrey Grigson’s poetry.

Sketch of JG by Rosie Greening