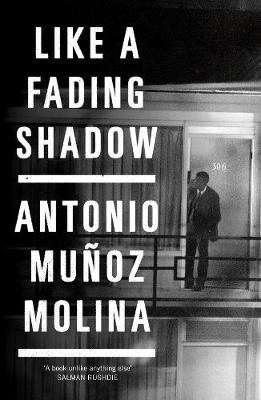 There are three narratives in Antonio Muñoz Molina’s Like a Falling Shadow: an account of James Earl Ray, the murderer of Martin Luther King Jnr., as he escapes to Lisbon in 1968; an account of the unnamed narrator (nevertheless recognizably Molina) who visits Lisbon in 1986; and an account of the same narrator in 2010, who comes to Lisbon to see his son. This could have been an opportunity to interact with Lisbon as a city, but this is not what happens. Molina’s Lisbon is a setting in which his characters concern themselves with their own thoughts, and it is hard to reach the city through their self-involvement. Which is a deliberate narrative choice, of course, but I suspect it would be more effective if the thoughts presented were more compelling.

The narrative concerning James Earl Ray is replete with factual and probable details: where Ray slept, which offices he visited in search of a visa to Africa, which sex workers he spent time with, what names he used. Molina gives explicit credit to the CIA files on Ray, and he makes use of those files to construct a narrative filled with anxious tension. The detailed attention to Ray’s actions comes with some attempts to reconstitute his thinking, but only in terms of the mechanics of his escape. In reconstituting Ray as a character, Molina relies heavily on his corpus of evidence. We know, for example, that Ray refused a transfer to a more pleasant prison because it wasn’t segregated, but we don’t know why. There is very little hatred in this assassin, racial or otherwise. There is, in fact, very little personality.

Strangely, this is also true of the other mind to which the novel exposes us – that of the author’s self-insert, both as a young man in 1986 and more recently. He introduces himself as someone who is easily carried away, who doesn’t make decisions about his life (job, marriage, children), who is insecure about his identity as both writer and civil servant; as a man who succeeds in a mediocre fashion without much trying, yet who is also a special snowflake on the inside, and thus recognisable as a type in the antihero tradition. He enjoys alcohol and drugs because he finds these romantic; he contemplates (and occasionally practises) adultery, and keeps having existential crises over not very much. It could be much, of course, but the narrator doesn’t give us that – there is no great compulsion in his thoughts or his activities, nothing that would give our view of his mind any sense of character. The younger version of Molina is not yet thinking about James Earl Ray, only of his unfulfilling life and his ineffectual attempts to change it; the older Molina, it must be said, also doesn’t think about Ray very much. Why this topic became something to be researched and narrated is not discussed.

For a work in the genre of historical-investigation / non-fiction-fiction, this is curious. Laurent Binet’s HHhH, concerned with the assassination of Reinhard Heydrich by Czech resistance fighters Josef Gabcik and Jan Kubis, gives a passionate account of why we need to know about the event, why the daily lives of these young men before the assassination are deserving of our attention. Juan Gabriel Vasquez in The Shape of the Ruins focuses on two political murders in Colombia, but also the narrative actions required to reconstruct them – the need to bring out the truth is as much a key problem in the novel as the probable causes of the murders. Molina’s novel doesn’t seem to want to ask this question; yet why should the life of a racist assassin be told? There is perhaps a conflict between Ray’s impulse to hide and get away, which imbues the text with (excellently crafted) narrative tension, and the reader’s presumed desire to see the killer caught and punished. Molina is careful not to offer any justifications for the act, but what this means is that Ray also doesn’t think about his motives. Molina does, at certain points, consider how the act of narration makes its object interesting. Perhaps his aim was to render Ray’s life more fascinating by making him the protagonist? If so, I can’t say he has succeeded.

Translated from the Spanish by Camilo A. Ramirez