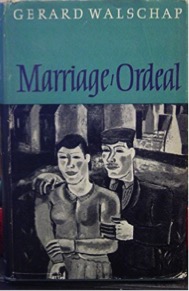 De Stichting ter Bevordering van de Vertaling van Nederlands Letterkundig Werk, (the Foundation for the Promotion of the Translation of Dutch Literary Works) was a State-funded quasi-governmental organization set up in 1954 to deal with translating Dutch literary works. One of its projects was to publish a seventeen-volume series of Dutch works in English called the Bibliotheca Neerlandica. The initiative began in 1963 but was prematurely abandoned by the Heinemann publishing company in 1969 due to poor sales figures.

One of the volumes that did reach publication contained G. Walschap’s Trouwen (1933) and Celibaat (1934), which appeared together as Marriage/Ordeal (1963). Both novels penetrate the substance of family life to it deepest levels. Rik, the hero of Marriage, is a spoilt egocentric whose existence, almost despite himself, is given genuine meaning and worth by his wife, a woman of determined, but kind, ambition. In Ordeal, the protagonist, André, is an apparent semi-imbecile, whose life of frustrated incompetence is enlightened and ennobled by suffering and hideous disfigurement.

Despite the translator, Alex Brotherton, being poorly paid – only 1,000 guilders for the volume, (£1,473 at today’s prices) – the copyeditors being Dutch and the dust cover featuring a drab, black-and-white reproduction of a painting by Gustav de Smet named The Lovers, (1877–1943) this work became one of the series’ bestsellers.

Translation studies did not exist at that time and the translator, who won the Martinus Nijhoff prize in 1967 for the volume, had to develop his own pioneering strategies to deal with the translation, without recourse to established academic literature. Three particular issues may well have caused Brotherton concern. Celibaat, meaning ‘celibacy’, was the original title of the second work, but he changed it to Ordeal, probably because the latter captured the negative contemporary connotations surrounding the celibate state, relating to scandals concerning Catholic priests in the 1960s. This decision resulted, however, in the harmony of the two titles – Marriage and Celibacy – being lost.

Another challenge Brotherton faced was that in Celibaat, Walschap wrote paragraphs and sentences in French and in German. The Flemish population in the 1930s would have had few issues with a French text, and would have been regularly exposed to German as well. This was not, however, the case for the English-speaking target audience. The translator chose to offer no assistance to the English reader in the form of explanations or footnotes, instead remaining true to the source text. Offering a life-line in the form of footnotes or even translating the sentences and preceding them with, ‘speaking in French/ German’, would have helped the reader while preserving the feeling of foreignness. His translation strategy was simply to allow the reader to discover the answers himself.

Another demanding strategy issue for Brotherton in Celibaat was his translation of ‘het heerken’ (a Flemish expression meaning a precocious, naughty boy) as ‘the little lordie’. ‘Het heerken’ could not be left in the original as it would be meaningless to an English speaker, but, in my opinion, Brotherton’s solution does not translate the true essence of this main player in the novel; perhaps ‘Little Lord Fauntleroy’ would have been a better choice.

Marriage/ Ordeal is now out of print and, sadly, unlike some of its sister works, has not appeared in any other series nor been updated in translation. Despite the faults in Brotherton’s translation, my feeling is it should be made available.

Irving Wolters is a PhD student in the Dutch department at UCL and is researching the Bibliotheca Neerlandica’s failure to contribute to the literature of the English-speaking world.