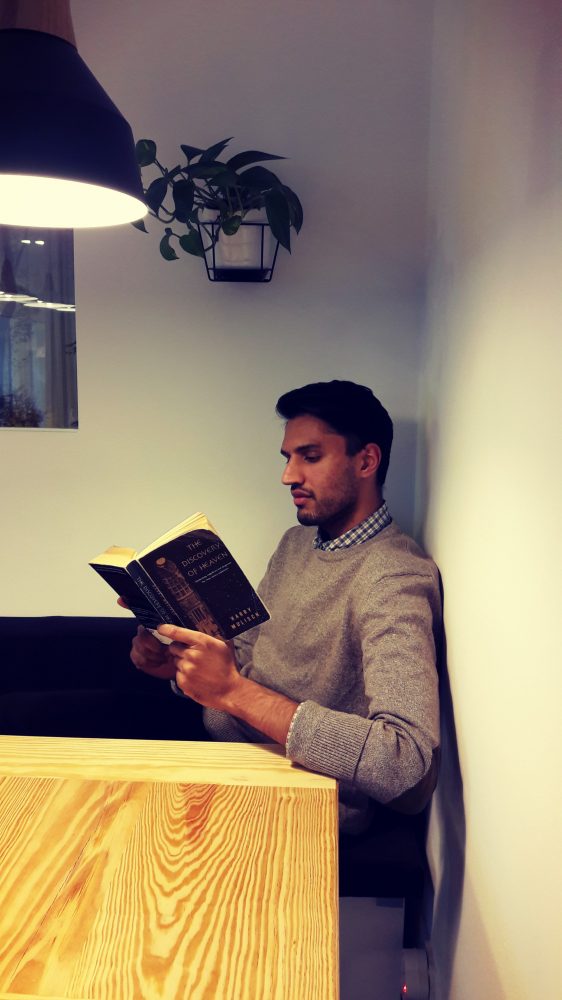 First published in 1992, Harry Mulisch’s The Discovery of Heaven received its English translation in 1998, and was reissued in 2011. Widely regarded as Mulisch’s masterpiece (alongside The Assault), as well as masterpiece of modern Dutch fiction, it looks set to receive a few more reprints. But as well as being old, it is an old-style book.

It tells the story of Onno and Max, two friends whose significance stretches far beyond their lives: They are part of a divine plan to get the Mosaic tablets, on which the ten commandments are inscribed, back to heaven. Max, an astronomer who lives the fast life (there must be some), picks up a hitchhiking Onno one night. Onno is a linguistic genius who lives at a remove from the rest of humanity. Theirs is a brilliant bromance: jousting intellectually, channelling Wittgenstein, Newton, Aristotle, and any number of philosophers and scientists. But there is genuine warmth to their friendship and genuine conflict over Ada, a musician, which together save their friendship from mere caricature. Furthermore, the writing has an energetic feeling, which makes the frequent digressions not merely bearable, but engaging.

This style of writing belongs to its time, when authors believed novels could act as totalisers of history; an entire epoch could occur concurrently with the life of a single individual, for example. In this, Mulisch shares Borges’ vision of fiction: where actuality and possibility combine and conflict, where the particular is interlaced with the infinite, and the written word itself has the chimerical power to bring imaginary things into existence. But Mulisch has a better sense of humour than Borges, and a real empathy for his creations. So, while he may write some stilted dialogue, such as when Max teases Onno about trying to decipher the insoluble Phastos Disc –

‘Rid yourself of the fear of paradoxes, shall I tell you what is written on your disc? … What is written here is illegible.’ / ‘Very good. Maybe it was written by Epimenides who said all Cretans are liars.’

– he can also poke fun at this tendency; Ada, cupping Max’s “cool scrotum” quotes Schiller: Be embraced, you millions.

It’s their earthly tasks, not their divine one, which occupy us: while Max goes around Amsterdam looking for women to seduce because if he were not working or chasing women, he would find himself peering into a void that was more than just boredom, Onno simply wants to lounge around and be a gentlemen scholar. Max’s problem is his traumatic past: he is constantly trying to fill the Freudian absence of his murdered mother (a Jewish victim of the war), with an elusive female ideal. Onno’s problem is his tortured present: he is simply too removed from everyday life to engage with it, and spends time trying to solve insoluble puzzles. These failings indicate real hope, however: Max always hopes he can relieve his trauma; and implicit in Onno’s hopes of solving the unsolvable is the desire that he too may be understood.

This difficult family history can be extended to God and humanity – where humans suffer the trauma of repressing or forgetting God. This is expressed, rather obliquely, through the concept of change. Every time you learn or discover something, you change it, or worse, kill it. As Onno reminds us, the Greeks had no word for culture – they simply lived it, until they called it something, and thereby destroyed their culture. Words therefore aren’t prized in and of themselves, rather for what they simultaneously sustain and terminate. Up to a point, language and learning fill the voids the characters feel, but they need something more, something inexpressible. Hence the return to the divine: while learning may allow humans to perceive God and return the tablets, doing so means they are, necessarily, no longer humans, and God is no longer God. However, simultaneously, they create new possibilities for themselves: by getting rid of the imperative to believe, they once again open the space up for the lived experience of the mystical and numinous.

This reflects Mulisch’s hope: the book is bursting not only with classical references, it is alive with the hope of a new European culture. With the collapse of the Soviet Union, and therefore, no need to call life ‘Western European life’, Mulisch hoped people could actually get on living.

The energy of this once-new European consciousness seems sadly dissipated in the Brexit age, but we may have recourse to consider what it means to believe that the presence of Mozart, and Schiller, and Shakespeare, for example, not only makes life interesting, but also worth living.

The Discovery of Heaven