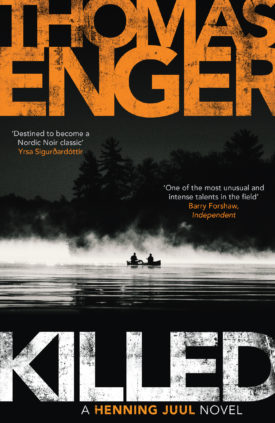 In recent years Henning Juul has been to hell but not back. The crime journalist has nearly died in a fire deliberately started in his own apartment. His six-year-old son Jonas lost his life, and ex-wife Nora struggles to come to terms with the tragedy. Deep mental and physical scars remain. The fire was supposed to be a scare only, to stop him from investigating links to Tore Pulli, a former muscle-for-hire-turned-property-broker, sentenced to fourteen years in prison for a murder he didn’t commit. Tore asked Juul to help him clear his name in return for information about those responsible for Jonas’ death – but he was killed in prison before he could reveal his secret.

Juul is trapped in a web of painful memories and intricate connections to the underworld which keep hold over many people over many years, including Trine, his estranged sister. Trine, a disgraced politician, forced to step down as a Minister of Justice, was seen outside the flat on the night of the fire, talking to a well-known criminal. Various links, painstakingly documented, take us back to when Trine had worked as a lawyer at the Oslo town council. An old pensioner refused to be turfed out from her flat and after complaining was ‘removed’ instead. The complaint never became official and the case never formally solved, as Trine was blackmailed by the mysterious ‘Daddy Longlegs’.

Everything, whether past or present, points to one powerful figure with unlimited resources and hunger for control, to William Hellberg, and his childhood friends Tore and Charlie Høisæther. They made a fortune exploiting Brazilian poverty to build apartment complexes for sun-seeking Norwegians. Their partner, Rasmus Bjelland, gave up the dodgy lucrative business. Yet leaving an empire like that is not easy and as he was on the run back in Norway and contacting the journalist Iver Gundersen, things became even worse. Both men paid the ultimate price. Hellberg himself, comes from a wealthy but troubled family, where his mother had orchestrated the death of her sister-in-law in the past. And there’s Daddy Longlegs too.

The Complex network of the criminal underworld has an enormous impact on the main trio of positive characters in Killed: Henning, Nora and Iver share the same professional background as journalists, the same desire to investigate and the same emotional ties. Thomas Enger doesn’t spare Henning, best by tunnel-vision, desperate to find the truth but losing perspective: He was exhausted. Damaged. Tired if constant pain, tired of the hunt.

Dark and unsettling, Killed follows events after Thomas Enger’s previous novel Cursed, a week after Henning and Nora had found Hellberg’s missing sister, and can be read as a standalone thriller, because sufficient background information is woven into the story. Credibility is enhanced in Killing by its excellent plotting and descriptions of specific events, such as Norway’s tainted past during World War II, analysis of the currently rich and conservative society, as well as links to the Balkan criminal underworld, comprised initially of ordinary people who had fled war. If the novels of Thomas Enger are terra incognita I would recommend starting at the beginning of this powerful and emotional series in order to fully understand Henning Juul and appreciate the truly shocking finale of this novel. This unforgettable, chilling “Norwegian Noir novel” has been beautifully translated by Kari Dickson.

Ewa Sherman studied Polish Literature and Language, and law, and worked with the Polish media, including music monthly Tylko Rock (Warsaw) and Polish Radio (Białystok). She’s translated several books of sonnets written by her mother Krystyna Konecka from Polish to English. She is passionate about Nordic and Scandinavian literature and culture, blogs about these subjects for Nordic Noir blog, and writes reviews for EuroCrime and Crime Review websites.