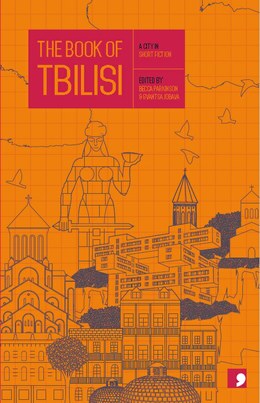 This latest in Comma Press’s series of (always good) city anthologies takes us to the Georgian capital, Tbilisi, a culturally distinctive city and a historically complex one. The book’s ten stories all take us to the Tbilisi that’s contemporary – a place of social media and cellphone roaming and TV talent shows – but the aftershocks of the past are still felt here. On an historical, national scale (former Soviet systems are still everywhere apparent) but also on the personal, with two stories in particular evoking the communicative and connective power of shared family memories. In one of these, “Dad After Mum”, one of the collection’s stand-outs for me, a widowed father has lost his memory of the past or who he is; this makes his unremembered daughter’s identity fragile and contingent, until she finds a way to reawaken something that has long been dormant within him.

“Dad After Mum” isn’t the only melancholy story – on the contrary, there’s a lot more evidence of unhappiness and dissatisfaction here than of their opposites. We meet many characters who can’t find their place in the world, who have lost their bearings and their meanings (an eccentric TV producer spends his days scouting for talentless people for a talent show, while a talented tightrope-walker is forced by circumstance to work in a massage parlour); others are on the edge of death themselves, or have lost loved ones (“Precision” is particularly devastating). And where happiness is actually in evidence, it’s often allied to other forces that are darker – in the deeply unsettling “Flood”, say, where a family does indeed feel something like exhilaration, but this feeling comes from tearing their entire apartment violently to shreds…

Georgia is a country proud of its literary heritage, but also of the scope of its contemporary writing, and there’s a good breadth of new talent showcased here (often in pretty good translations, too). It’s hard to resist the somewhat reductive and/or futile task of trying to figure out what they have in common, though it’s certainly the case that the common threads are on the whole more thematic than narrative or stylistic (there’s a lot of resistance and survival in a time of pressurised change, a lot of intrusion and often hostility from neighbours in ugly apartment blocks…). But as with others in this excellent series, part of the pleasure is not only in the quality of the stories but precisely their variety. Indeed, some needn’t be Tbilisi at all and might be set anywhere. There are enough though that give a sense of this city, however hard it might be for us outsiders to pin that down. Credit is due, also, to co-editor Gvantsa Jobava’s introduction, which provides useful context to help those of us new to this fascinating place find our way around.

THE BOOK OF TBILISI