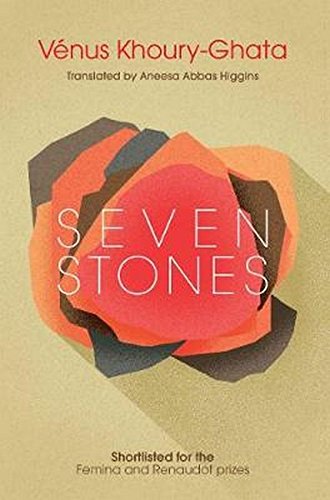 Often, without much thought (and quite insensitively), we consider other cultures to be intrinsically different from our own; we imagine our communities as divided from each other by huge crevices that are difficult or simply impossible to bridge. And yet the bridging happens, sometimes even when we don’t try. We stare at the divide and in front of our eyes it suddenly closes, leaving just a scar behind, or sometimes not even that.

What happens when a French woman, lost and reeling after the departure of her lover and the death of her cat, decides to go to an unnamed Muslim country to provide help as a volunteer in times of drought and famine, and then stays beyond the hard times to teach local children? What happens to her ideas about life, about a woman’s position and role within society? Will she spread her ideas, or will the reverse occur – will she learn something new? Or perhaps both occurs.

Seven Stones tells the story of three women from two very different cultures, all of them at the crossroads, all trying to pull themselves together in their own ways in the wake of destructive relationships with men.

Noor is sentenced to stoning, having been impregnated by a stranger, because, as the village sheik explains, ‘the devil has entered her through her opened crack, (…), a devil that can only be expelled by the stones piled up in the square’. According to the main character, ‘the foreign woman’, it was a rape, but Noor never confirms this, instead focusing on the pleasure she enjoyed with the man. ‘Noor, a jug of milk filled to overflowing, a river of mud that’s burst its banks, a saucepan that’s boiled over. Noor, the black widow spider who weaves her web and then destroys it.’

Amina is the village wise woman / fortune teller, who is slowly declining into madness. At first justifying the stoning order she then opposes it and in the end sacrifices herself instead of Noor. As the author puts it, ‘Noor and Amina are two faces of the same moon, destined to be eclipsed together. Two legs in one sirwal.’

Seven Stones is like a desert: poetic in its monotony; harsh but gentle; stifling yet inspiring; seemingly dead but in fact full of life in all its colours and flavours; unchanging yet filled with the potential for surprises. In this book everything stays the same and at the same time nothing does. And all of this beautifully and sensitively translated by Aneesa Abbas Higgins, whose expertise is on full display.