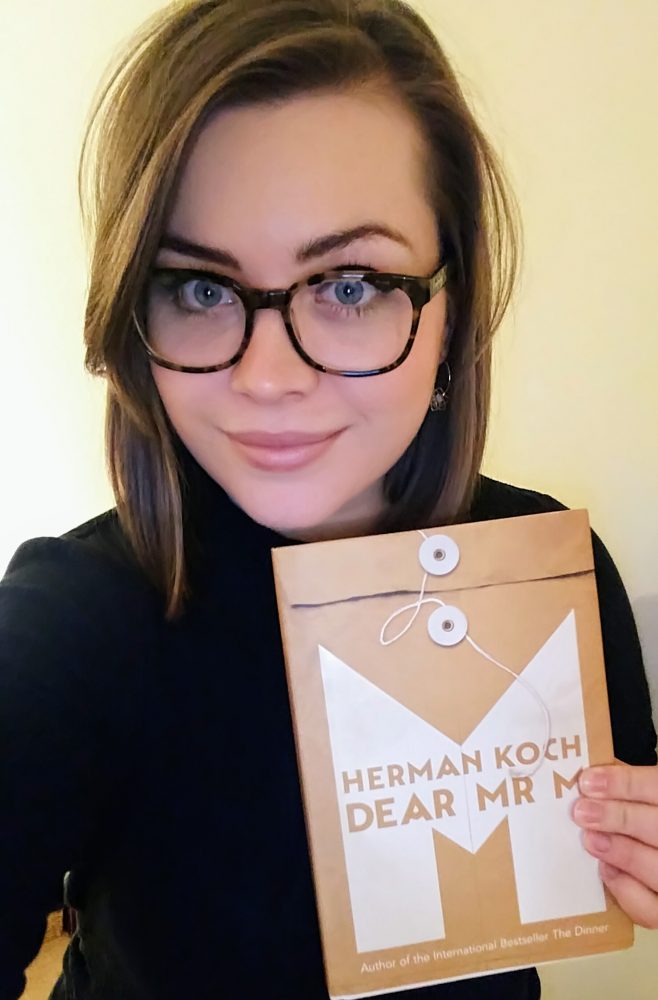 This is a novel one reads with an eyebrow raised and a wry smile, so intriguing is the main narrative voice. Yet the reader will also be left scratching their head at a plot steeped in mystery, teamed with a great deal of ambiguity and complexity. It is this mystery, however, that adds to the tremendous build-up so characteristic of Koch.

Koch’s delectably dark humour is also in evidence, particularly in the intensity with which the main narrator watches Mr M, and in his merciless descriptions of him. Mr M seems so pitiful, so ordinary, so boring, that is easier, as a reader, to empathise with the enigmatic narrator (despite his questionable stalking behaviour) than with Mr M, even though, at this point, you have no reason to believe he deserves either the treatment to which the narrator subjects him or the damning way in which he describes him.

Koch keeps the intrigue alive, both by switching narrative perspective and by using various ‘flashback’ moments, if we can call them that. Although these at times can be perplexing, they are still effective and are linked to the ‘real’ people that Mr M’s bestseller, Payback, is based on. You also know that the main narrator – Mr M’s close-observing neighbour – is somehow involved in the book, but you are left guessing how until the very end.

There is one section of this novel that left me unsatisfied and frustrated, however. Towards the end, a long section is dedicated solely to the teenagers Payback was based around. Whilst other such passages provided interesting insights and are vital to the book’s intrigue, this section is so long, it almost kills the suspense that has been so brilliantly developed previously.

Fortunately, in the closing chapters, Koch certainly manages to make you sit up and pay attention. The candid, yet almost understated exchange of dialogue between the narrator and Mr M, which takes place after a brilliant and unexpected altercation, is nothing short of enthralling. It is full of surprises and left me wanting more – so much so, I feel it is a shame that there isn’t more of this dialogue in place of the drawn-out passages focussing on the teenagers.

This impressive ending is reminiscent of Koch’s The Dinner, in the way that it makes one realise that these are novels about seemingly ordinary people, doing extra–ordinary things: things that leave the reader shocked, appalled, but more importantly, thrilled. There is a big market for ‘thrillers’ at the moment. But, while other big, successful novels are often showy, with fantastical twists and turns, Dear Mr M is unforgiving, sharp and perfectly dry.

Interestingly, when I have read Koch’s work before, it was in its original language of Dutch. Reading Dear Mr M in English, however, I was struck by how recognisable the style and structure were. This is, of course, a great compliment to the translator, Sam Garrett, who manages to capture the essence of Koch’s writing and bring it over into English.

This is, perhaps, not a novel for an impatient reader in search of a rollercoaster ride. But for those who are willing to persevere, it is definitely worth the wait.

Translated from the Dutch by Sam Garrett

Aimée Hardy studied Modern Languages at the University of Sheffield, where she developed her passion for Dutch literature, which led to an MA in Dutch Studies at UCL. Her dissertation focussed on exploring migration, identity and the struggle for integration and acceptance in modern Dutch literature. Aimée works in Education and Communications for the Anne Frank Trust UK, and also teaches Dutch classes.