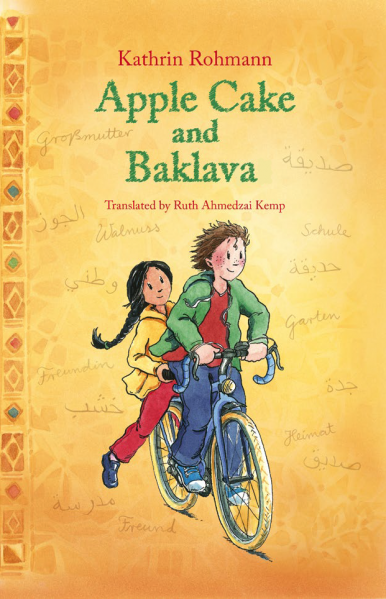 A drawing pinned to the wall of 11-year-old Leila’s attic bedroom shows a tiny dark spot in the midst of a vast expanse of blue. The blue is the Mediterranean; the dark spot, the ramshackle craft in which she made the voyage to Europe with her mother and her two teenage brothers. Leila has also drawn the Syrian flag, her father’s bakery in Damascus, her grandmother’s beautiful garden – and a figure in a hospital bed.

Leila’s classmate Max has had an untroubled childhood on a small farm in the German countryside. He enjoys mending bikes, going to Fire Cadets and baking with his granny. Max and Leila meet when she faints at school and loses the walnut from her grandmother’s garden, which, she feels, gives her a direct connection with the old lady in distant Syria. As Max and Leila search for the walnut he gradually overcomes his shyness and awkwardness, while she starts to open up to the possibility of a genuine friendship.

The walnut represents Leila’s yearning for her grandmother, her father (who is at her grandmother’s bedside) and home. It is hard for a childlike Max, who has never been uprooted, to comprehend the trauma of war and exile; but understanding comes when his granny reveals that she, too, was once a refugee from wartime Pomerania, hundreds of miles to the east. Her own memento is a handwritten recipe for Lebkuchen, which her grandmother gave her mother as a parting gift when the young family fled westwards.

It is often the sharing of food that bridges cultural and linguistic boundaries. So it is in this story, with Leila enjoying Max’s granny’s apple cake, while her elder brothers make baklava for the school Christmas fair. And when a schoolmate reveals that her father wants to open a café in the village, it looks as if there may soon be an opening for a baker from Syria.

Apple Cake and Baklava sensitively depicts the heartache of a youngster desperately missing her beloved grandmother and her home. It gives equal space to Leila and Max, with alternating chapters telling the story from their contrasting viewpoints. Thus we see Max, too, struggling with the difficulty of making friends with someone very different from himself. Despite the tragic background of the war in Syria, the story is ultimately optimistic; the walnut is planted in German soil, and Leila begins to feel that it may be possible to put down roots.

This beautifully written book, in a pitch-perfect translation by Ruth Ahmedzai Kemp, will appeal to children between about eight and twelve. The narrative is complemented by Franziska Harvey’s evocative black-and-white illustrations. There is no doubt that this book deserves to be in primary schools throughout the UK and, indeed, the rest of Europe. It could hardly be more timely, or more urgent.

Translated from the German by Ruth Ahmedzai Kemp

Fiona Graham, Reviews Editor at the Swedish Book Review, has translated three books from Swedish and a story for children from German (Nataly Savina’s The Roof, in Quest, published by Alma Books). She is a ‘graduate’ of New Books in German’s 2018 programme for emerging literary translators.