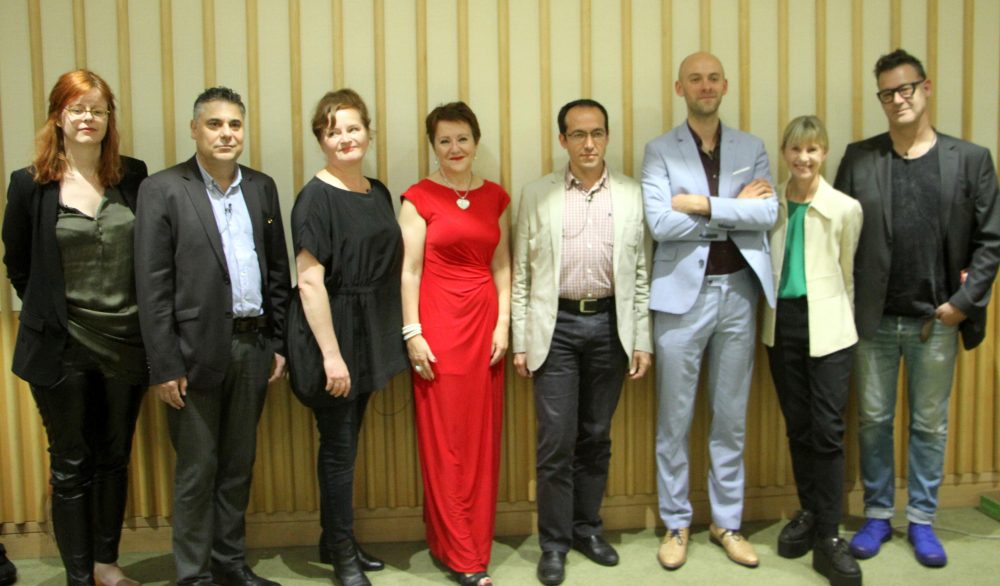 Jaap Robben from the Netherlands;

On May 11th 2016, gathered together in London for the eighth time (aka eight new dresses and eight new pairs of shoes!), we created our very own continent of united European literature, at the heart of British culture, the British Library.

A reminder for all of us that, in these dangerous times for European culture, here in our wonderful world of literature we can be both, British and European. Here in our special borderless literary haven, we can travel freely from Turkey to Bulgaria, Flanders to The Netherlands, Slovenia to Denmark, to discover the very best of contemporary European writing in English. Our six ‘winning’ writers are all literary celebrities in their home countries, all magnificently translated and published in English, most for the first time. They were selected by me and my fellow judges, Daniel Hahn and the British Library’s Janet Zmroczek and Kristian Jensen, from a pool of sixty-five European writers, submitted by publishers and cultural organisations last November.

Supported by the Elizabeth Kostova Foundation

With the semi-documentary, satirical writing of Alek Popov we are thrown head first into the cauldron of modern Bulgarian life, emerging with a smile on our faces. Alek Popov is a great storyteller and truth teller. He also likes to shock us and make us laugh.

We confront ‘the black box’ at the beginning of the novel, placed on a kitchen table in Sofia in 1991. The novel, The Black Box is narrated in alternate chapters and alternating viewpoints by two brothers Nedko and Angel, who soon adopt the friendlier, post-communist names ‘Ned’ and ‘Ango’. The box contains the ashes of their father, Professor Emanuel Banov, who had been guest-lecturing in the USA when he disappeared, and it ‘sits there’ though the whole novel while the brothers explore the mystery of his death. Carefully constructed, in spite of the exuberant writing and colourful language, the novel jumps fifteen years into the future (2007) to tell the contrasting and parallel tales of the two brothers: Ned joins the early exodus of young Bulgarians from their homeland and emigrates to the USA, becomes successful and wealthy; Ango stays in Bulgaria, poor, directionless, a failed publisher and writer, until he wins the Green Card lottery and is able to emigrate. The two brothers are united in New York. Ango becomes a dog walker, immersing himself in the politics of the Dogsters’ Union, and Ned is asked by his firm (“Silvertape food wrap”) to tackle a complex business matter back in Bulgaria and to monitor the work of the strange Mr. Kurtz (!) who lives in one of their factories, wears a blanket and has a cult following.

There’s some great writing here. I loved the chapter when Angel drives across the US in his father’s old car, lands in Kentucky and meets Ezra Pound, the car mechanic. The novel though is for me often too fruity, misogynist and baggy; hugely enjoyable, inventive and clever (SBAs = Successful Bulgarians Abroad; NSABs = Non-Successful Asses stuck in Bulgaria) but not profoundly anything – not sufficiently dark, insightful or satirical. However, written with great fluency and lightness of touch, it takes you on a great ride, through the big issues of male rites of passage, immigration, belonging and identity, post-communism-meeting-capitalism and accompanied by the absurd freak shows of life of both the USA and Bulgaria.

Ana is a successful textile designer and botanical illustrator. At the age of 62 she leaves behind her life in Slovenia for Burkino Faso – but why? She meets 27 year old Ismael, a car mechanic, pickpocket, streetboy and orphan with a backstory of abuse, neglect and a mother’s love. But his mother is killed when he is 7. Like Ana he is today alone and orphaned. Both are eloquent observers of their lives and of each other. The story unrolls in both voices, side by side. Overriding the potential clichés of black-white, Europe-Africa, male-female, young-old, rich-poor, this is a sensual, lyrical, visceral, loving and honest novel with astute and poignant discourses on art, politics and fiction. Neither Ana nor Ismael feels they belong anywhere – except perhaps, briefly, with each other, entwined in each other’s bodies. The novel is also funny and dense – perhaps too dense, perhaps too heady a mix. It is a Francis Bacon or Lucien Freud of a novel, raw and fleshy, unadorned but supremely beautiful. It is about finding meaning in life and about the ultimate victory of ‘Love Supreme.’

YOU HAVE ME TO LOVE

Supported by the Dutch Foundation for Literature

What makes a great novel? What makes it memorable? For me it is a novel that eats its way into you, stays in your gut, nourishing you. I read You Have Me To Love several months ago and, like a record stuck in its groove, it won’t let me go. The narrator is Mikael, aged 9 at the opening of the novel, 15 by the end. His language grows with him as he grows but not his awareness, isolated as he is on his remote island with only his troubled mother, his grief at the loss of his father, some seagulls and a few islanders for company. Jaap Robben is a well-known Dutch children’s writer and poet and this is his first adult novel, but in the voice of a child, with clear-eyed sentences and without judgement. It is a universal story of isolation, loneliness and tragedy. As Mikael’s mother becomes increasingly unhinged he is sucked into her dysfunctional world, seeking refuge, strangely, with a baby seagull, or as his beloved father called them ‘sky sailors’. Inevitably, the pressure cooker blows its lid.

THE MAN I BECAME

Supported by the Flemish Literature Fund

Both Jaap Robben and Peter Verhelst will be among a whole ‘bank’ (it’s Frankfurt after all) of Dutch and Flemish writers from Flanders and The Netherlands at the Frankfurt Book Fair in October, when they are joint Guests of Honour: a great homage to some of the best writers around. How is that they produce such great literature? (Answers on a postcard!)

Peter Verhelst’s The Man I Became is the first novel I’ve read in the voice of a gorilla. Although I had just watched the ground-breaking CGT ‘Jungle Book’ film, nothing could prepare me for the simple, unadulterated genius of Verhelst’s vision of the evolution of man. As a reader you must completely adopt the ape’s point of view or this short novel won’t work. You follow the path of the nameless ape-narrator as he is taken from his jungle roots to the New World and taught to become human; to talk, walk upright and use a mobile phone like a human and – the ultimate test – to attend a cocktail party and make small talk. Our ape-protagonist becomes events manager at the animal theme park ‘Dreamland’, more a nightmare of human hierarchy and cruelty. The stark images and unbridled fantasy of this superb novelist, also a poet and playwright, remain controlled and incredibly clear in spite of the complexity of the topic and the sadness at his core.

If you haven’t read Dorthe Nors do so now. Last year our Danish ELN-‘winner’, Naja-Marie Aidt, went onto fame and fortune; this year’s Danish short story writer is on a similar stairway to heaven. Disturbing and beautiful, sublime and spare, these sharp parables of everyday life are both cruel and compassionate. There are 15 stories in 82 pages and nowhere is a word out of place.

(This is a short, short review, in honour of Dorthe Nors’ short short stories: reviewers can do it too!)

Translated from by Ümit Hussein

In spite of the fact that it is set entirely in a Turkish prison – no one’s favourite place – this is an uplifting book. The writing and translation are outstanding, as is its insight into humanity and inhumanity. Looking into the eyes of Burhan Sönmez, when I interviewed him on stage for ELN, as he described his own torture and suffering, I briefly descended into his personal hell but ascended again on the wings of his remarkable compassion. Four prisoners share an underground prison in a torture centre. When they are not being tortured (which we do not witness), they tell one another stories about the city of Istanbul, above ground. These stories enable them to survive and remain human. As Sönmez explains,

“there are two Istanbuls, one below ground and one above. Yet in reality both are one and the same. This is the main point.”

Ten days, ten stories and ten chapters, like Boccaccio’s Decameron. Classical in structure and profoundly moving, this novel will, I predict, itself become a classic.